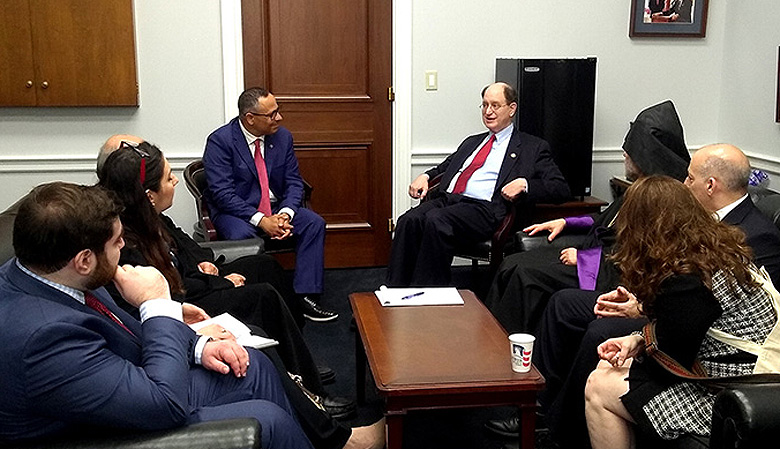 WASHINGTON, DC – As Senate and House Committees prepare their Fiscal Year 2020 (FY20) foreign aid priorities, Armenian National Committee of America (ANCA) national leaders were joined by His Grace Archbishop Anoushavan Tanielian, Prelate of the Prelacy of the Armenian Apostolic Church of Eastern U.S. and a broad array of community advocates, in urging the Senate and House action to expand aid to Armenia and Artsakh, broaden the U.S.-Armenia strategic partnership, and establish a permanent, principled policy of U.S. remembrance of the Armenian Genocide.

“Our endeavors in Washington are driven by the relentless work of thousands of local activists who share the ANCA’s commitment to advancing our pro-Armenian federal advocacy agenda,” said ANCA Chairman Raffi Hamparian. “Our effectiveness in backing increased U.S. aid for Armenia and Artsakh, calling out the failed Madrid Principles, and ending U.S. complicity in Ankara’s Genocide denial is the direct result of the selfless contributions of time, energy, and resources by regional leaders, chapter organizers, and local advocates across America. I thank each and every one of our backers,” Hamparian added.

During in-depth discussions with Senate Foreign Affairs Committee Ranking Democrat Bob Menendez (D-CA), ANCA Chairman Raffi Hamparian and National Board Member Ani Tchaghlasian, both New Jersey natives, thanked the Senator for spearheading the Armenian Genocide Resolution (S.Res.150), which currently has 16 cosponsors. Sen. Menendez questioned U.S. Ambassador to Turkey designate David Satterfield on his understanding of the history of the Armenian Genocide, and faced with the nominee’s refusal to properly characterize the crime, noted, “We can not ultimately move to the future if we can not recognize the past as a simple reality.” The Senate Foreign Relations Committee approved the Satterfield nomination on Thursday, May 2nd, sending his nomination to the full Senate. ANCA leaders also encouraged Sen. Menendez to support expanded aid to Artsakh, prioritizing the ongoing de-mining effort through The HALO Trust and additional funding for humanitarian and developmental programs, including the expansion and modernization of the Lady Cox Rehabilitation Center, a regional clinic serving children and adults with physical and mental disabilities.

In discussions with House Appropriations Committee member Rep. Jeff Fortenberry (R-NE), ANCA leaders stressed both Artsakh and Armenia aid priorities, with a special emphasis on assistance for Armenian and other minority refugees who have sought safe haven in Armenia from Middle East unrest in Syria and Iraq. As a key member of the Subcommittee on Foreign Operations, Rep. Fortenberry plays a pivotal role in writing the FY2020 foreign aid bill, which will be up for Subcommittee consideration on May 10th and full house consideration in June.

ANCA leaders thanked Rep. Katherine Clark (D-MA) for her leadership in 2018 in advancing legislation promoting Armenia reforestation efforts with incentives, including U.S. debt-forgiveness, in return for increasing Armenia’s forest cover to at least 12% of its total land mass within 10 years. During the Capitol Hill Armenian Genocide Commemoration, Rep. Clark announced plans to re-introduce the ANCA-backed measure, noting how both reforestation and advancing a principled genocide policy are forward-thinking actions. “Planting trees is an optimistic statement for the future. We don’t plant trees for ourselves. We do it to provide shade to the generations to come and provide resources for those generations. And when we look at genocide, it’s not just about looking back, but looking forward and ensuring that we don’t repeat the atrocities of the past.”

Talks with Congressional Armenian Caucus Co-Chair Frank Pallone focused on the Artsakh Travel and Communication Act – a measure to remove barriers to increased travel to Artsakh as well as the implementation of common-sense proposals to reduce tensions at the Artsakh and Armenia lines of contact with Azerbaijan. In an interview with the ANCA’s Raffi Karakashian in April, Rep. Pallone noted that “It makes no sense to have this travel and communications restriction because we should try to have as much contact as possible with the people there so that there is an understanding of what the people of Artsakh and the government face.”

Discussions with House Armenian Genocide Resolution lead sponsor Adam Schiff (D-CA) focused on expanding bi-partisan support for the measure (H.Res.296), which currently has over 95 Congressional cosponsors, and efforts to secure a timely House floor vote for the measure. Rep. Schiff spoke passionately about the importance of a clear and permanent U.S. policy on the topic during remarks at the Capitol Hill Armenian Genocide observance as well as the March for Justice Rally held on April 24th in Los Angeles and at local genocide commemorative events.

“Now, more than ever, our community’s longstanding tradition of civic-spiritual partnership represents a vital key to engaging effectively with America’s leaders. Together, we are more than the sum of our parts,” stated Hamparian. “Collectively, we powerfully reaffirm our shared commitment to the principles of faith and freedom, and – at the level of policy – materially strengthen the U.S.-Armenia relationship and the national and democratic aspirations of the Armenian nation.”