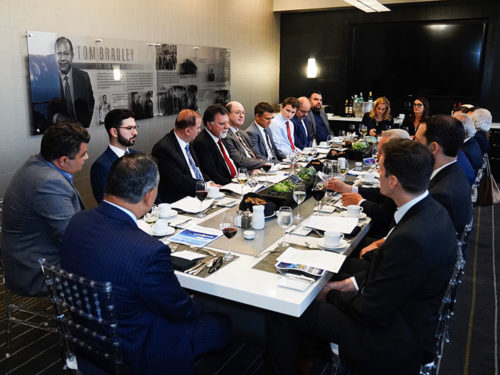 LOS ANGELES, CA – Leaders, donors, and friends of the Armenian National Committee of America (ANCA) gathered on July 31, 2019 in downtown Los Angeles to support the re-election of long-time legislative champion Brad Sherman (D-CA), a veteran U.S. Representative who serves as a senior member of the influential House Foreign Affairs Committee.

The dinner reception, held on the 51st floor of the prestigious City Club, was hosted by longtime ANCA supporter Michael Mahdesian, and featured the participation of noted attorney Garo Mardirossian and Michael Sarian, a nationally respected health care leader, and a number of distinguished ANCA national, regional and local leaders.

“The ANCA stands with Brad Sherman,” said ANCA National Chairman Raffi Hamparian. “He fights effectively for the full range of our community’s strategic priorities, most recently the continuation of the U.S. assistance package to Artsakh, a humanitarian program that he launched back in 1997 and that has, since then, provided more than $40 million in aid to the citizens of this proud Republic. His leadership is directly responsible for clearing vast areas of Artsakh of tens of thousands of mines and unexploded ordnance – saving lives and inspiring hope. To this very day, he continues to defend Artsakh aid against relentless attacks by the Azerbaijani government and its allies in Washington, DC.”

The Congressman represents tens of thousands of Armenian Americans in his congressional district which stretches across California’s San Fernando Valley. Earlier this week, he joined with his colleague Congressman TJ Cox (D-CA) in collecting Congressional signatures on a letter encouraging U.S. Agency for International Development (USAID) Administrator Mark Green to preserve U.S. support for de-mining programs in the Republic of Artsakh. This effort – backed by the ANCA – came in response to the Trump Administration’s attempts to end this humanitarian aid program and stop funding for the HALO Trust’s de-mining operations. Administrator Green, during testimony before the House Foreign Affairs Committee on April 9, 2019, responded to a question from Congressman Sherman by affirming that USAID was committed to completing the clearance of landmines and unexploded ordnances within the traditional boundaries of Artsakh. The ANCA has mounted a nationwide grassroots Congressional calling campaign in support of continued U.S. assistance for Artsakh. To participate, visit http://anca.org/call.

Last month, Congressman Sherman successfully offered a powerful amendment to the National Defense Authorization Act to block the transfer of U.S. defense articles to Baku that could potentially be used by the Azerbaijani government to act upon its threat to shoot down civilian aircraft operating out of Artsakh’s Stepanakert Airport. The ANCA-backed amendment was cosponsored by Congressional Armenian Caucus Co-Chairs Frank Pallone (D-NJ) and Jackie Speier (D-CA) and Vice-Chair Adam Schiff (D-CA). The House adopted the measure by a vote of 234 to 195. In March of 2011, Arif Mamadov, the Director of Azerbaijan’s Civil Aviation Administration, reported that the Azerbaijani government had warned the International Civil Aviation Organization (ICAO) that it had not authorized flights to Nagorno Karabakh, explaining that “The law on aviation envisages the physical destruction of airplanes landing in that territory.” The Azerbaijani government has neither withdrawn this threat, nor agreed that its forces will not shoot down civilian aircraft. As a result, the civilian airport in Stepanakert has remained closed, depriving the citizens of Artsakh and others of their universally recognized right to travel. The text of the Sherman Amendment states that “none of the funds authorized to be appropriated by this Act or otherwise made available to the Department of Defense for fiscal year 2020 may be used to transfer defense articles or services to Azerbaijan unless the President certifies to Congress that the transfer of such defense articles or services does not threaten civil aviation.”