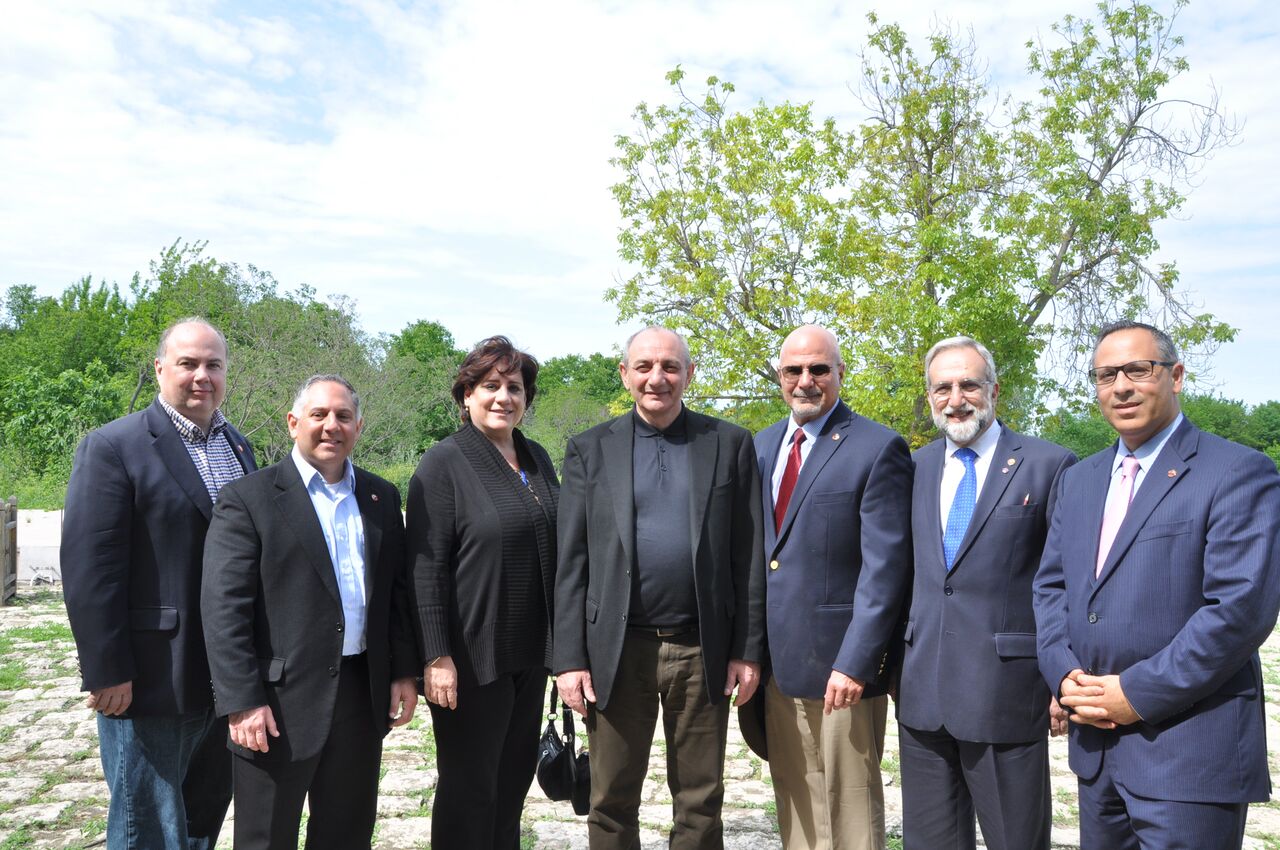 STEPANAKERT, NKR – Leaders of the Armenian National Committee of America (ANCA) consulted with the President of the Nagorno Karabakh Republic (Artsakh) Bako Sahakyan this week in the capital, Stepanakert, regarding the grassroots organization’s ongoing efforts to implement the Royce-Engel peace proposals, expand U.S. aid programs to Artsakh, and counter Azerbaijan’s reckless military escalation.

Congressional calls for the Royce-Engel proposals have grown in the wake of Azerbaijan’s April 2nd offensive against Nagorno Karabakh. These recommendations, drafted by the Chairman and Ranking Democrat on the U.S. House Foreign Affairs Committee, Rep. Ed Royce (R-CA) and Rep. Eliot Engel (D-NY), respectively, have the support of over 90 of their House colleagues. These practical peacekeeping proposals include: 1) An agreement from all sides not to deploy snipers, heavy arms, or new weaponry along the line of contact; 2) The placement of OSCE-monitored, advanced gunfire-locator systems and sound-ranging equipment to determine the source of attacks along the line of contact, and; 3) The deployment of additional OSCE observers along the line of contact to better monitor cease-fire violations.

“We welcome this opportunity to reaffirm our shared commitment to the Nagorno Karabakh Republic’s security and independent status,” remarked ANCA Chairman Raffi Hamparian. “The ANCA is taking clear and concrete steps to counter Azerbaijani aggression, on the one hand, and to build up Artsakh, on the other hand. Our ANCA leadership team, those here in Artsakh this week and our leaders across the United States, are fully committed to the immediate implementation of the Royce-Engel peace proposals – to hold Azerbaijan accountable for its aggression – and to expanding U.S. aid to Artsakh – to meet the needs of those who, as a result of war or disability, are in greatest need of medical care.”

While in Artsakh, the ANCA delegation visited the Baroness Cox Rehabilation Center in Stepanakert. In March of this year, dozens of ANCA leaders came to Washington, DC to encourage Congress to allocate assistance for the center, which provides rehabilitation and reintegration services for children and adults with disabilities. The ANCA, in testimony submitted to both the U.S. House and Senate, has called for at least $5 million in Fiscal Year 2017 U.S. aid to Artsakh. The Baroness Cox Rehabilitation Center’s Director, Vardan Tadevosyan, who had taken part in the ANCA’s advocacy campaign on Capitol Hill this March, provided a tour of the facility for ANCA leaders, noting that, despite its limited resources, the Center provides desperately needed care to over a 1,000 patients a year from around the region.

ANCA leaders travelled to Yerevan and Stepanakert as part of a global Hai Tahd conference, which brought together Armenian advocacy leaders from the Western Hemisphere, Europe, the Middle East, Eurasia, and the Asia/Pacific region. Their visit to Stepanakert coincided with the May 9th Shushi Liberation Day celebration in Nagorno Karabakh.