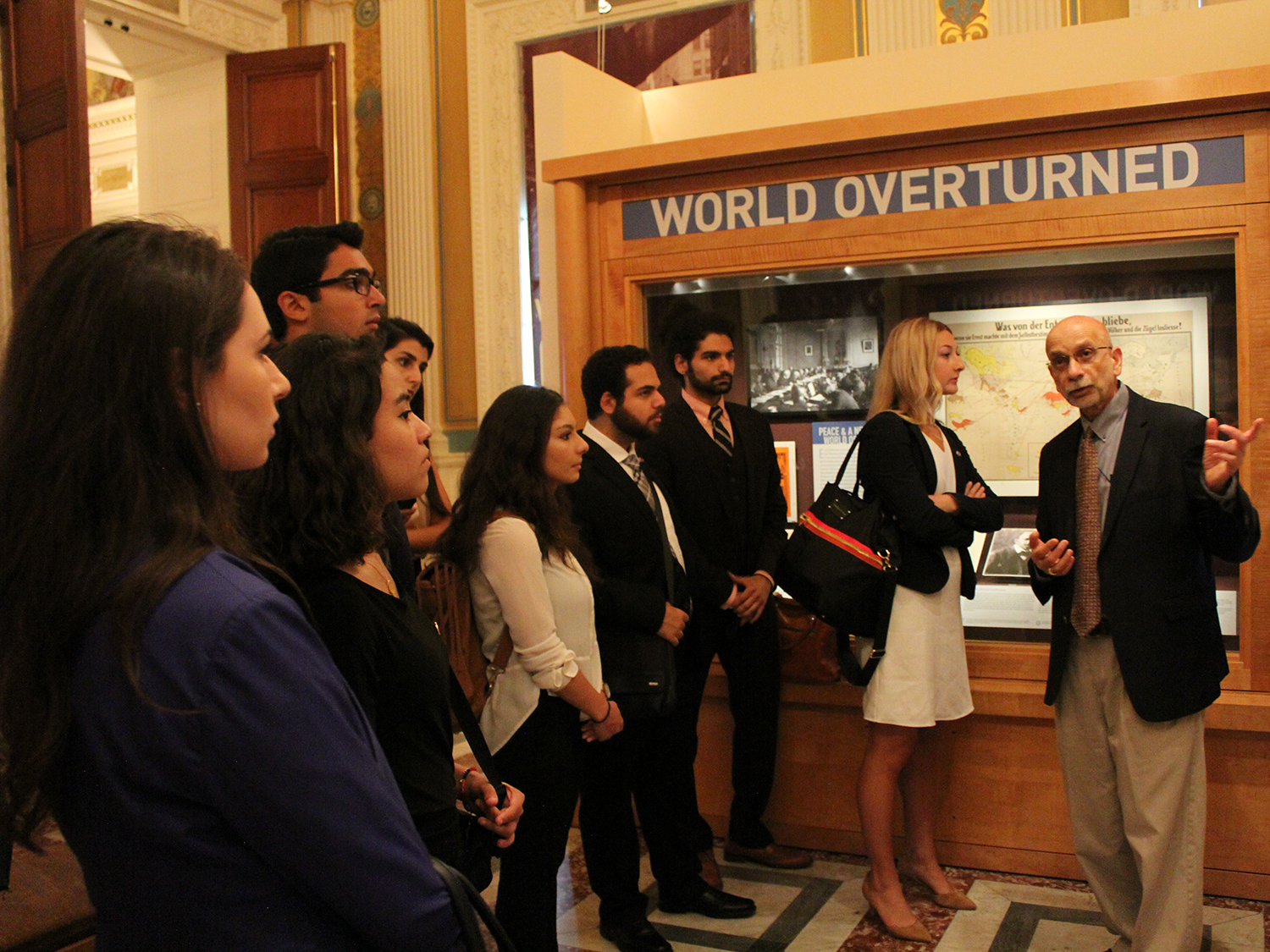 “This summer, our interns saw, firsthand, the impact of effective advocacy efforts in advancing core community priorities from strengthening the U.S.-Armenia relationship to ensuring Artsakh security and freedom to demanding justice for the Armenian Genocide,” remarked ANCA Programs Director Tereza Yerimyan, who ran the summer initiatives. “Each are exceptional ambassadors of the Armenian Cause who will serve as a credit to the communities and organizations they serve. Their professional growth and involvement in Armenian American organizations expands our reach and understanding of how we can advance our Cause through different avenues.”

The ANCA interns shared their favorite moments in a video, available on ANCA social media channels, and on YouTube: https://youtu.be/gt_-atfqjCg

Hailing from Indiana, Massachusetts, New Jersey, Virginia, Maryland, and different parts of California, this 12-person intern class experienced the different facets of Washington DC, from welcoming the President of Armenia on his first diplomatic visit to the US, to celebrating 100 years of U.S.-Armenian relations, to sharing our rich history and culture at the Smithsonian FolkLife Festival, to advocating community priorities on Capitol Hill, and participating in professional development workshops – all while experiencing the warmth and welcome of the local Armenian American community.

During their rigorous eight-week advocacy “boot camp,” interns learned to effectively communicate Armenian American priorities to Members of Congress and share updates with community advocates, encouraging them to take action. The Smithsonian FolkLife Festival’s Armenia: Creating Home Program was a two-week spectacular which brought Armenian foods, traditional hand-crafts, sculpture, music and dance center-stage in the nation’s capital. The festival also shared the history of the Armenian Genocide through films and documentaries like The Promise, and Intent to Destroy, supported through the ANCA Endowment Fund’s #KeepThePromise initiative.

Interns also had the opportunity to venture to Philadelphia to participate in the Hamazkayin Armenian Cultural and Educational Association’s ArtLinks Program, learning how to better share their Armenian heritage and history through photography, poetry, and dance and then returned to Washington DC to celebrate the 100th anniversary of the Homenetmen Armenian Scouting and Athletic Association at the Eastern Region Navasartian Games. The Soorp Khatch Armenian Church Senior Society, led by Mrs. Hakinkth Terpandjian, Mrs. Karine Sahagian, and Yeretsgin Maggie Aktavoukian taught interns time-honored Armenian recipes and celebrated community traditions at an ANCA Aramian House dinner.

“This summer has been one for the books, thanks to the ANCA,” explained LSI intern Chris Khachadour. “From meeting dozens of Members of Congress to reaching out to Armenians across the country, I enjoyed it all. I had the rare opportunity to celebrate the 100th anniversary of the First Republic of Armenia at the Senate and the Armenian Embassy to celebrating Armenian culture at the national mall as part of the Smithsonian Folk Life Festival. I will forever reflect on the people I met and the events I attended over the past 8 weeks.”

Victoria Messikian, who along with Chris Khachadour focused on expanding the ANCA’s Rapid Responder Program, concurred, “The ANCA Leo Sarkisian Internship met all of my high expectations and more. I had such a great time this summer speaking with Armenians from across the United States, working in a professional setting and applying my major every day, as well as advancing the Armenian Cause in our nation’s capital. I couldn’t have asked for a better and more productive way to spend my summer.”

Boston’s Antranig Kechejian and Fort Wayne, Indiana’s Adrienne Tazian-Schwartz brought their computer science backgrounds to the internship, working closely with IT Director Nerses Semerjian to strengthen the ANCA’s advocate outreach infrastructure. “This summer, the ANCA gave me the incredible opportunity to not only gain technical and professional experience, but make meaningful contributions to the Armenian Cause and lifelong friends,” explained Kechejian. “I would strongly recommend the Leo Sarkisian Internship program to any young, ambitious Armenian who has the drive to better themselves, and their community”.

Tazian-Schwartz explained, “The ANCA takes special care to mentor and enrich the lives of all of their interns. Because of my time working in Washington, I have a more secure future and feel confident in my professional abilities. Through the experience I gained coding the ANCA’s Salesforce-based advocacy database and training in the APEX software language, I am excited to pursue a career in computer programming after graduating next May.”

“This summer has far exceeded all my expectations,” explained Mikhanjian. “The amount of exposure to the professional Washington environment that we packed into eight weeks is remarkable, and I’m so grateful to have been a part of it. I’m so much more educated and involved in Armenian advocacy, and I can’t wait to use my experience in the next step of my career,” concluded Mikhanjian, who graduated Univesity of California Riverside in June.

“This internship has been an amazing opportunity to expand my knowledge of Hai Tahd [the Armenian Cause],” stated Bazikyan. “I’ve learned how our grassroots power has influenced national policy and am proud to be part of the change that is yet to come.”

Local Marylander and Georgetown University student Haik Voskerchian, who worked on U.S.-Armenia Double Tax treaty related advocacy efforts, remarked, “the ANCA internship has been a truly transformative experience. I have grown as an individual, an Armenian, and a professional here, and I wouldn’t have chosen to spend my summer in any other way.” Voskerchian noted that programs including the Hamazkayin’s ArtLinks and the Library of Congress Vartanants Day Lectures have shown him the broad appeal that Armenian issues have in U.S. society. “If anything, this experience has taught me that the preservation of Armenian culture and justice for Armenians isn’t just important to our community, but to the heritage of the world and to the new international order.”

Established in 1986 and named in memory of the late ANCA Eastern U.S. community leader who spearheaded Armenian American grassroots advocacy for more than four decades, the ANCA Leo Sarkisian Internship program now has hundreds of alumni across the world, spreading the message of truth and justice for the Armenian Genocide, freedom for Artsakh, and a secure, prosperous, and democratic Armenian homeland.

Launched in 2003, the ANCA Hovig Apo Saghdejian Capital Gateway Program helps secure permanent employment and professional internships in Washington, DC for young Armenian American professionals and students. Through the years, the ANCA has developed many relationships in and around Capitol Hill and identified a wide range of opportunities in the Washington, DC area. The CGP utilizes these resources and contacts to help candidates identify and secure jobs that fit their interests and needs.

The interns stay at the ANCA’s Aramian House, a landmark building in downtown Washington, DC’s Dupont Circle neighborhood which serves as the permanent home of the Leo Sarkisian Internship and Hovig Apo Saghdejian Capital Gateway Programs. The 2015 purchase of The Aramian House was made possible through a generous donation by the family of the late community leader and philanthropist Martha Aramian of Providence, Rhode Island. The Aramian family – led by sisters Sue and the late Margo and Martha – have long been among the most generous benefactors of ANCA programs as well as of charitable projects in the Armenian homeland and the Diaspora.