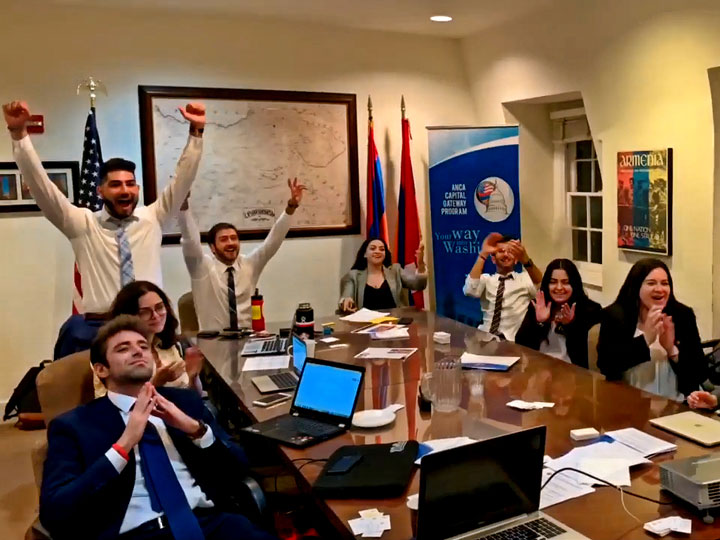 WASHINGTON, DC – Ask the participants in the Armenian National Committee of America (ANCA) Leo Sarkisian Internship and Maral Melkonian Avetisyan Fellowship about the favorite part of their two-month journey through the nation’s capital, and you’ll get answers as diverse as their backgrounds as university students from across the U.S. and Canada.

Now, back in their hometowns and campuses, preparing to begin the new academic year, one thing is certain: all are eager to apply their experiences and newfound insight to advance Armenian American priorities and empower new activists to join the Armenian Cause.

“What an amazing summer to have been in Washington, DC,” said ANCA Programs Director Sipan Ohannesian, who served as a coach and mentor to the interns, helping them expertly navigate the ways of Washington.  “With four legislative amendments impacting U.S. economic and political ties with Armenia and Artsakh, and over a dozen advanced seminars and workshops focusing on everything from our unique geopolitical challenges to future career opportunities – it was a non-stop summer of advocacy and learning. And, through it all, friendships were forged that will last a lifetime.”

For incoming Georgetown University law student Varant Anmahouni, a memorable summer moment was discussing the importance of two Artsakh-related pieces of legislation with Rep. Gus Bilirakis (R-FL) — himself a Greek American. “His embrace of our immediate cause was, of course, appreciated. But perhaps more striking was the genuine passion with which he explained the necessity of justice for wronged Christian communities throughout the region – sentiments he also expressed to the Hellenic community during a commemoration of Turkey’s illegal occupation of Cyprus,” said Anmahouni.  “This not only stood out as a rare case of moral consistency but also underscored the importance of cooperation among groups with similar struggles and existential threats.”

For Montclair State University Finance major Roubina Bozoian, the fast-paced nature of the summer offered an adrenaline rush.  “My favorite part was when we got the early morning notification that we were needed on the Hill hours later to rally support for the Sherman-Cox Letter to save U.S. aid to Artsakh,” said Bozoian. “Congress was out of session, which meant ensuring our community’s voices were heard in time would be no easy task.  But in the end, the community’s letters and calls – and a lot of door-knocking and face-to-face advocacy – paid off with over 89 House members co-signing the letter.”

Arranging a meeting and discussing community concerns with Rep. Josh Gottheimer (D-NJ), who represents Nairi Diratsouian’s alma mater, Ramapo College, was a highlight for the Psychology major.  “Subsequently we ran into Alexandria Ocasio-Cortez and I had the opportunity to discuss U.S. policy on the Armenian Genocide and thank her for recent co-sponsorship of H.Res.296,” explained Diratsouian.

Harvard University Government and Music major Mary Galstian appreciated the educational component of the ANCA summer program. “A favorite was a conversation with former U.S. Ambassador to Armenia John Evans on topics ranging from his diplomatic career and the current state of Artsakh to challenging the morally questionable U.S. position on the Armenian Genocide, and, more broadly, US-Armenian foreign policy.  Amb. Evans is not afraid to speak the truth when it comes to Armenian justice, inspiring many policymakers to uphold high moral principles,” said Galstian.

Political Science major Hakop Hajibekyan enjoyed the ANCA outing to the Congressional Baseball Game, where our team mingled with Members of Congress in a more casual setting. “One Member that stood out above all for me was Congressman Jim Costa,” said Hajibekyan.  “Congressman Costa and I sat next to each other at America’s favorite past time and talked about Armenia, Artsakh, and everyday politics in the United States. Part of what this internship taught me is no matter how much fun you are having or where your life takes you, you always have the opportunity to further the Armenian Cause.”

For McGill University Anthropology and Political Science major Karin Kassabian, a Canadian new to American politics, a favorite moment was sitting down with the chief of staff of a Member of Congress who traditionally opposes Armenian American concerns.  “Armed with the training and facts the ANCA staff had provided, I was able to effectively engage the staffer on the importance of pro-Armenia initiatives, reminding him of Armenia’s political situation and realities.  In the end, the U.S. Representative supported us on that particular issue,” remarked Kassabian.

California State University Fullerton Political Science major Greg Mikhanjian said a memory from the first week of the ANCA internship as the most impactful.  “After a long day on Capitol Hill, we were all at the ANCA office watching the votes on the Speier and Cox Amendments securing additional U.S. aid to Armenia and Artsakh. And then the gavel struck, and the celebration started – making all the hard work worth it,” noted Mikhanjian.

For Wesleyan Government and Russian, East European, and Eurasian Studies (REES) major Lucine Poturyan, the inaugural Maral Melkonian Avetisyan Fellow, the greatest moment of the internship was meeting Speaker Nancy Pelosi (D-CA). “The women in the group had gone to an event that Politico was hosting for female chiefs of staff, and we left feeling empowered and ready to make a change,” said Poturyan.  “Later that day, we met Speaker Pelosi in the Capitol and had a moment to discuss U.S. policy on the Armenian Genocide and encourage her to bring the resolution (H.Res.296) up for a full floor vote. And we made the same pitch to the Speaker exactly a week later at the Congressional Baseball Game,” concluded Poturyan.

“Meeting with the Armenian community in Richmond, Virginia stands out to me,” said Merrimack College International Relations major Daron Pogharian.  “Seeing how emotional some of the veteran members became when they saw the “new generation” singing and dancing with them to the songs of old was quite moving. The joy of sharing that experience with them, however, had to be tempered with a serious underlying point: it will be up to us to continue bearing the timeless torch of Armenian advocacy,” explained Pogharian.

Established in 1986, the ANCA Leo Sarkisian Summer Internship program provides student leaders and activists an opportunity to participate in an eight-week intensive program designed to give them the tools necessary to effectively advance issues of concern to the Armenian American community on the federal, state and local level.  Named in memory of the late ANCA Eastern U.S. community leader who spearheaded grassroots activism to advance the Armenian Cause for more than four decades, the Leo Sarkisian program now has hundreds of alumni across the world, spreading the message of truth and justice for the Armenian Genocide, freedom for Artsakh, and a secure, prosperous, and democratic Armenian homeland.

In 2019, the ANCA inaugurated the Maral Melkonian Avetisyan Fellowship, a living legacy to the devoted youth leader whose community activism and commitment to the Armenian homeland continue to inspire new generations of young Armenian Americans.  During the eight-week Washington, DC program, interns live at the ANCA Aramian House, located a short distance from the ANCA offices.

Applications are already open for the 2020 Leo Sarkisian Internship and Maral Melkonian Avetisyan Fellowship, which will run concurrently from June 15th to August 7th. The application deadline is March 1, 2020.  To learn more and apply, visit anca.org/internship.