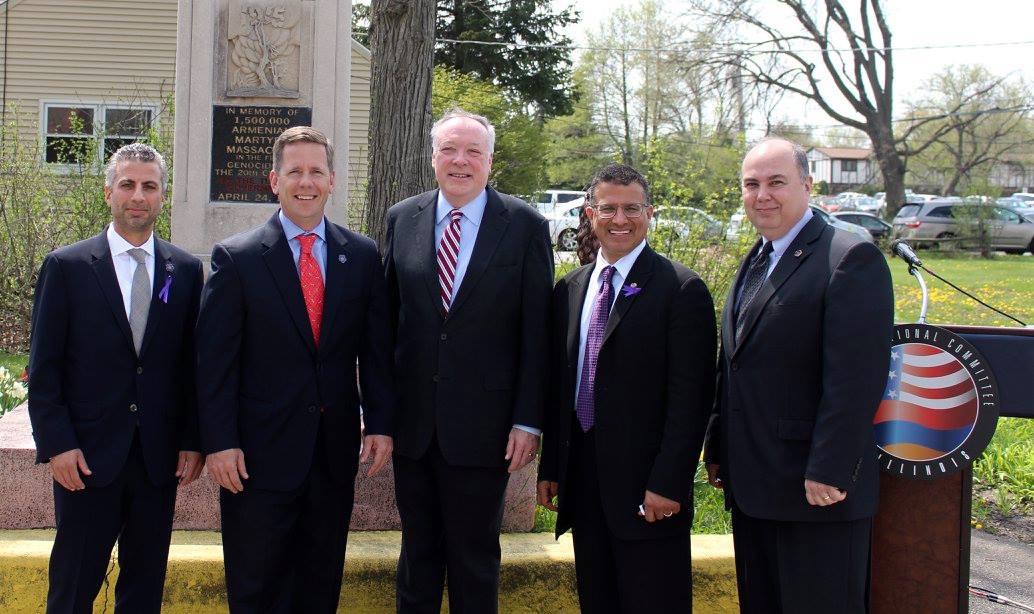 (ARMENIAN WEEKLY, May 3) GLENVIEW, Ill.—On Sun., April 24, more than 500 members and clergy of the greater Chicago Armenian community joined together at the All Saints Armenian Church in Glenview, to commemorate the 101st anniversary of the Armenian Genocide. The event opened with the Divine Liturgy, following by a short program by the Armenian National Committee of Illinois (ANC-Il) at the monument, located on the church grounds, dedicated to the 1.5 million Holy Armenian Martyrs.

In his remarks, Killian said that we must not only remember the genocide, but as Armenians, it is a duty and privilege to pursue a just resolution to this long-open wound in Armenian history. He commented, “Whereas commemoration at its core is a personal experience, seeking justice is our collective battle.” Killian went on to explain recent efforts to continue to distort and rewrite history by Turkey and Azerbaijan: the FactCheckArmenia campaign; Erdogan’s support of ISIS to continue persecution of Kurds, Yezidis, and Christian minorities in the Middle East; and Aliyev’s military offensive against Nagorno-Karabagh that specifically targeted civilian populated areas. He asserted, “Over 100 years have passed since the Armenian Genocide but the same motivations to create a pan-Turkic empire have not subsided within the Turkish power base.”

The program concluded with the singing of the beautiful and haunting memorial to our Holy Martyrs, “Hanchetsek,” which translates as rest for the dead, during which the crowd placed red carnations upon the genocide monument.