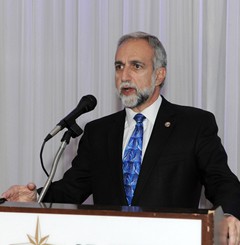 WASHINGTON, DC – The Commission on Security and Cooperation in Europe, also known as the Helsinki Commission, will hold an unprecedented Congressional hearing on the costs and consequences of Armenian Genocide denial.

The hearing, titled: “A Century of Denial: The Armenian Genocide and the Ongoing Quest for Justice,” will be held on Thursday, April 23rd at 1:30 pm in room 2175 of the Rayburn House Office Building.

In announcing the hearing, the Commission’s Chairman Chris Smith (R-NJ) issued an “appeal to the President to recognize the genocide of the Armenians,” adding that, “on the centenary of this tragedy we should join the German government and Pope Francis in speaking this word of truth. I also appeal to the Turkish government to recognize the genocide and issue a genuine apology. As mass atrocities unfold in Syria and Iraq, the world needs Turkey to engage constructively with its neighbors. The Turkish government can do this only after it honestly faces its own past.”

Hachikian will, in his testimony, raise five direct costs of Armenian Genocide denial: 1) the moral burden of mass murder denied, as recently expressed so powerfully by Pope Francis, 2) the dangerous global precedent of a genocide committed with impunity, 3) the threat that Turkey’s denials represent to Armenia’s security, 4) the serious obstacle that Ankara’s denials represent to those seeking the reform of Turkish society, and 5) the impact of denial upon the ongoing destruction of Christian religious heritage within the borders of present-day Turkey. He will stress that: “If we are to end the cycle of genocide – and no one is more committed to this cause than our community – we must elevate America’s and all the world’s response to genocide from a political calculation to a moral imperative.”

The Commission’s announcement reads as follows: “On the 100th anniversary of the first genocide of the modern era, Armenians are still fighting for recognition of the genocidal nature of the massacres that began in 1915 and resulted in the death of as many as 1.5 million people. The government of Turkey continues to deny the genocide and actively punishes those who recognize it. The hearing will examine denialism by the Government of Turkey and the decades-long effort to seek accountability. The hearing will also provide an opportunity to assess potential countercurrents in Turkish society that could move the Government of Turkey toward recognition, and explore what the United States and other countries can do to help bring about recognition and eventually, reconciliation.”

The following witnesses are scheduled to testify:

** Mr. Van Z. Krikorian, Co-Chairman, Board of Trustees of the Armenian Assembly of America

The hearing will be webcast live.