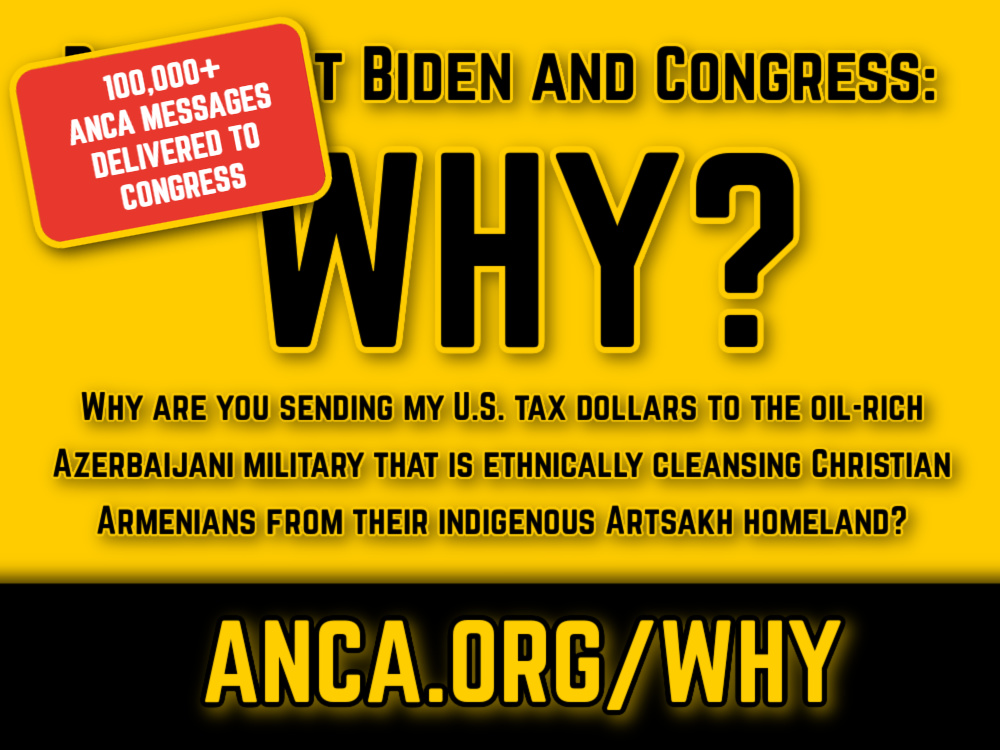 Over the past week, Armenian National Committee of America (ANCA) advocates from all fifty states delivered over 100,000 targeted Rapid Responder messages to U.S. legislators – raising alarms about Azerbaijan’s ongoing ethnic-cleansing of Armenians from the Berdzor (Lachin) corridor and demanding an immediate end to all U.S. military aid to the oil-rich Aliyev regime.

“President Biden was wrong when he greenlighted U.S. military aid to Baku on the eve of April 24th last year, and he’s wrong today, as his administration – amid renewed Azerbaijani ethnic-cleansing of Artsakh – continues to materially abet and morally embolden the Aliyev regime’s racist and violent genocidal aspirations,” said ANCA IT Director Nerses Semerjian, who designed the proprietary architecture of the ANCA’s Rapid Responder program. “We are encouraged by the ever-growing participation of Rapid Responders within our community and especially among our many non-Armenian allies and coalition partners.”

The letters sent to elected officials ask one simple question:  “Why are you sending my U.S. tax dollars to the oil-rich Azerbaijani military that is ethnically cleansing Christian Armenians from their indigenous Artsakh homeland?  “

Pro-Artsakh advocates can participate in the ANCA campaign by visiting http://anca.org/why

This latest ANCA campaign comes in the wake of Azerbaijan’s ethnic-cleansing of Armenian residents of Aghavno and Berdzor – located in the strategic Berdzor/Lachin corridor connecting Armenia and Artsakh.  The depopulation of the region is part of President Aliyev’s genocidal drive to eliminate Armenians from their ancient homeland. The corridor is Artsakh’s lifeline to Armenia and the world, serving as the primary artery for travel as well as communication, trade, and energy.  Aliyev’s proposed route from Armenia to Artsakh traverses primarily Azerbaijani-occupied territory, making travel unsafe for Armenians and impeding normal trade and communication.

A short explanatory on the importance of Berdzor, Aghavno, and the Lachin Corridor was prepared by the  Armenian National Committee of Artsakh and is available at: https://anca.org/assets/pdf/080822_LachinCorridor_Importance.pdf