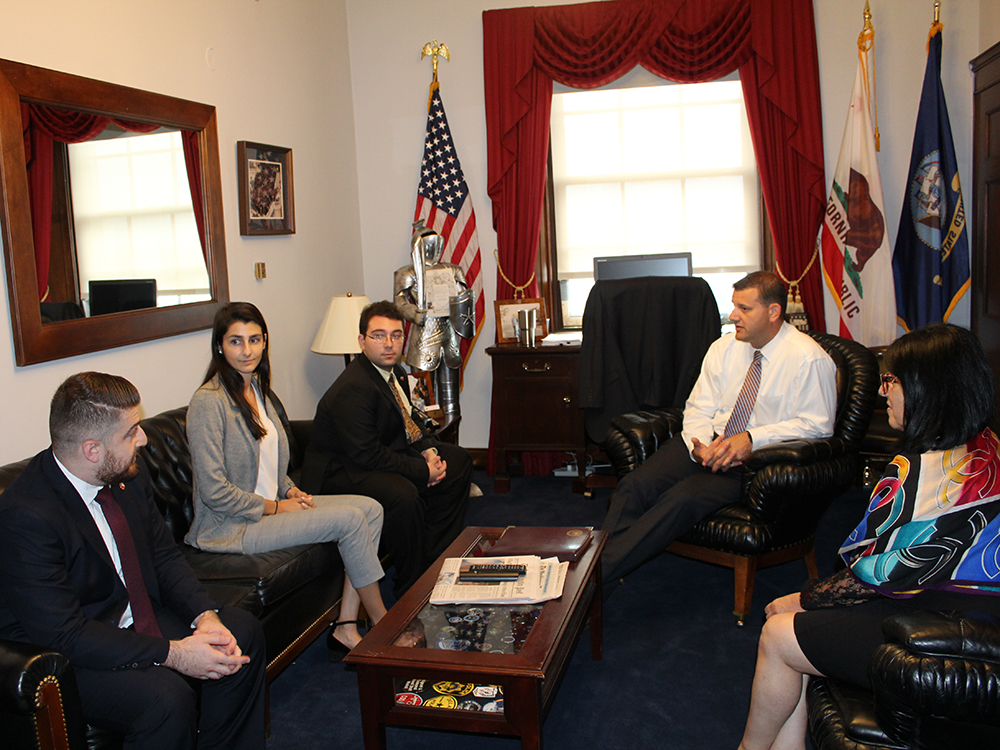 WASHINGTON, DC – Armenian Americans visiting Washington, DC for the centennial of the First Armenian Republic and the Smithsonian’s landmark Armenia: Creating Home program took to Capitol Hill today to advance the Armenian National Committee of America’s (ANCA) policy priorities – a qualitative strengthening of U.S.-Armenian relations, security and status for the independent Artsakh Republic, and justice for the Armenian Genocide.
]

The advocacy day is a precursor to nationwide meetings scheduled in Congressional districts across the U.S. during “August recess” when Senators and Representatives reconnect with constituents through local meetings and events.

“We were pleased to be able to arrange face-to-face Congressional advocacy opportunities for so many Armenians from around the Eastern United States who gathered this week in Washington for the Smithsonian Folklife Festival and the Centennial of the First Armenian Republic,” said ANCA National Board member Greg Bedian, who travelled from Chicago to lead advocacy teams from throughout the region.

“It’s great to be in our nation’s capital with so many Armenians from across the Western United States – celebrating the first century of U.S.-Armenia relations, visiting the Smithsonian’s remarkable Armenia: Creating Home program, and sharing our policy priorities with our elected officials,” said ANCA Western Region Communications Coordinator Dickran Khodanian, who, along with Government Affairs Coordinator Serob Abrahamian and Community Development Coordinator Simon Maghakyan traveled to Washington, DC to join in constituent meetings.

Photos from the meetings are available on the ANCA Facebook page at:
https://www.facebook.com/pg/ancagrassroots/photos/?tab=album&album_id=10155817040466859

ANCA advocacy day was part of a three-day Capitol Hill celebration of a century of U.S.-Armenia friendship, which was launched on Tuesday evening with a special Congressional reception headlined by Armenia President Armen Sarkissian. June 28th will feature the planned unveiling of Armen Garo’s (Garegin Pastermadjian) bust at the Armenian Embassy followed by a reception honoring President Sarkissian. Pastermadjian served as the first ambassador to the U.S. from the First Republic of Armenia between 1919 and 1920.

The events will culminate in the kick-off of the 2018 Smithsonian Folklife Festival on Thursday, June 28th, where Armenian culture and history take center-stage along with Catalonia. “Armenia: Creating Home” will be a weeklong exploration of Armenian culture – its influences, contributions, and exchange with diaspora communities throughout the United States. Over a million attendees are expected at the Smithsonian festival, held at Washington, DC’s famed “National Mall” from June 27–July 1 and July 4–8, 2018, which will include over 150 presentations and panels on Armenian music, food, craft, dance, and film, showcasing traditional practices which create “home,” both in concept and in form.

The ANCA recently tweeted about the ANCA Endowment’s sponsorship of the Smithsonian Folklife Festival’s Cultures of Survival programming, which includes multiple narrative sessions and screenings of the film The Promise and Intent to Destroy.