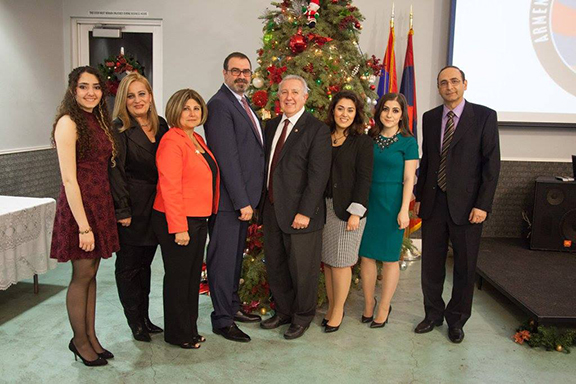 “We have very significant objectives and goals to achieve in the coming year. There is a tremendous amount of responsibility and work to be done, but with the support we enjoy from all those in attendance, we feel confident that we will build on our success and learn from our setbacks and hopefully build an organization that is more productive, active, relevant and engaged and one that you can depend on and be proud of in the coming 2016 year” stated ANCA Glendale Chairman Zareh Adjemian.

The evening’s program included welcoming remarks on behalf of the ANCA Glendale Board. Honorees throughout the night included ANCA Glendale Interns for their work and exceptional development throughout the year, Glendale City Clerk Ardy Kassakhian for his years of dedication to the community and civil service and Ascencia for their relentless dedication to ending homelessness within the city of Glendale.

Mayor Ara Najarian noted “It was my pleasure to cap off the Holiday season by attending ANCA Glendale’s Christmas reception. It was an event well attended by a broad swath of elected officials, community leaders and ANCA members and volunteers. The ANCA continues to be the premiere grass roots organization in Glendale concerned with community issues.”