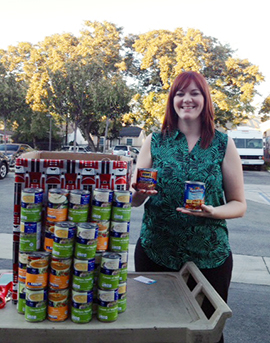 GLENDALE—The Armenian National Committee of America- Glendale Chapter (ANCA- Glendale) hosted a canned food drive in conjunction with their annual Christmas Party in which all proceeds were donated to the Salvation Army Glendale Corps. The evening brought together the organization’s dedicated supports, volunteers, and activists ranging from elected State and City officials, to sister organizations and community-based partners. By the end of the evening, the donation box was filled with canned goods and pantry items in reflection of the community inspired event the ANCA- Glendale sought to create.

“We are thrilled by the active participation of our guests and their attention to our canned food drive initiative,” stated ANCA- Glendale Community Outreach Coordinator, Tigranna Zakaryan. “As an organization we are keen on mobilizing the social service aspect of our work and this event not only gave us the opportunity to do just that, but it also shed light on the commitment of our supporters to engage in the livelihood of their local community.”

The Salvation Army Glendale provides meal services, a food pantry for families, housing for the homeless, and an open enrollment after school program for youth. Its services extend to residents within all demographics of Glendale and continues to thrive based on donation programs and fundraising efforts.

“Around the holidays we experience a dramatic increase in donations but as soon as this period ends, we are hit the hardest between the months of January and February due to the plummet of donations goods,” stated the Volunteer Coordinator for the Glendale Salvation Army Rachel Ryen. “We are grateful for the attention and outreach efforts of the ANCA-Glendale, and look forward to building upon our relationship as community leaders throughout the entirety of 2015.”

In the upcoming months, the Salvation Army Glendale will host two canned food drives to support their work: a “Love Drive” in February, and in collaboration with the Glendale Post Office, an event in March called “Stamp Out Homelessness.” Volunteers with Armenian language fluency are welcome and highly encouraged to participate.

For more information or if you are interested in getting involved, please contact ANCA- Glendale Community Outreach Coordinator Tigranna Zakaryan at tigranna@ancaglendale.org or Salvation Army Glendale Volunteer Coordinator Rachael Ryen at rachel.ryen@usw.salvationarmy.org