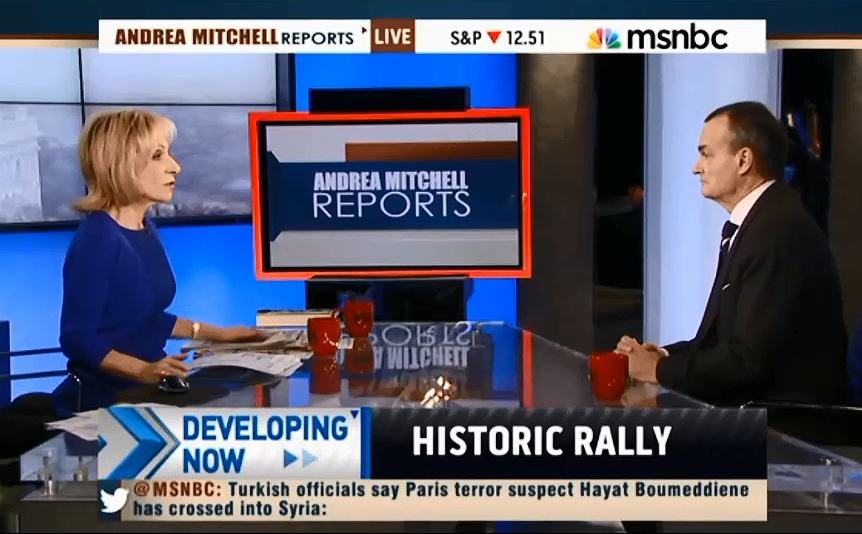 Washington, DC – The Ambassador of France to the United States has clarified, to leaders of the Armenian National Committee of America (ANCA), remarks he made earlier this week on the MSNBC show Andrea Mitchell Reports that could have been misinterpreted as giving legitimacy to the denial of the Armenian Genocide.

“I am aware that some of my recent declarations have been misinterpreted as giving legitimacy to the denial of the Armenian Genocide,” Amb. Araud told the ANCA. “Nothing could further from me. Not only does France recognize officially the Armenian Genocide but I have been myself bred in a city – Marseilles – with a vibrant Armenian community where I had a lot of friends. I have always been personally convinced that the sufferings inflicted to the Armenians in the Ottoman Empire constituted the first genocide in the modern history. I hope this message will dispel any doubt that you could have on this topic.”

“We welcome Ambassador Araud’s clarification of his comments regarding the Armenian Genocide,” remarked ANCA Communications Director Elizabeth Chouldjian. “Under President Francois Hollande and previous leaders, France has been a forceful and effective advocate in the global campaign to end Turkey’s denial of the Armenian Genocide. In this year of the Armenian Genocide centennial, their vigilance and active leadership is all the more critical in the pursuit of justice for this crime.”

The controversy over Ambassador Araud’s comments on the Armenian Genocide arose over an appearance he made on the Andrea Mitchell Reports show on MSNBC on January 12, 2015. On that show, host Andrea Mitchell began a conversation about free speech in which she remarked, “The tradition of free speech… it all began in France during the 1700’s and 18th century. But there are laws in France, laws that say you cannot deny the Holocaust, laws that say you cannot deny the Armenian Genocide. So why is it permissible to be as provocative as these anti-Muslim cartoons were. This is a debate we are having journalistically here in the United States as well,” Mitchell added.

Video of the Andrea Mitchell Reports interview is available here.

Moments after Ambassador Araud’s comments, the ANCA social media pages erupted with concerns and calls from Armenian Americans and elected officials alike, demanding a clarification. Similar concerns were shared by the French Armenian community, prompting a strongly worded letter by the Bureau Francais de la Cause Armenienne (BFCA – ANC France) to French Foreign Minister Laurent Fabius asking for an immediate explanation. The text of the BFCA letter (in French) is attached.

France officially recognized the Armenian Genocide in 2001 with the adoption of law 2001-70. Last year, on April 24th, President Francois Hollande joined the French Armenian community’s commemoration, offering powerful remarks condemning this crime and calling for the end of Turkey’s denial. President Hollande will be travelling to Armenia on April 24th 2015 to participate in Genocide centennial activities.

Photo: French Ambassador to the U.S. Gerard Araud speaking with Andrea Mitchell on January 12, 2015. Amb. Araud later clarified references he had made regarding the Armenian Genocide in a statement to the ANCA.