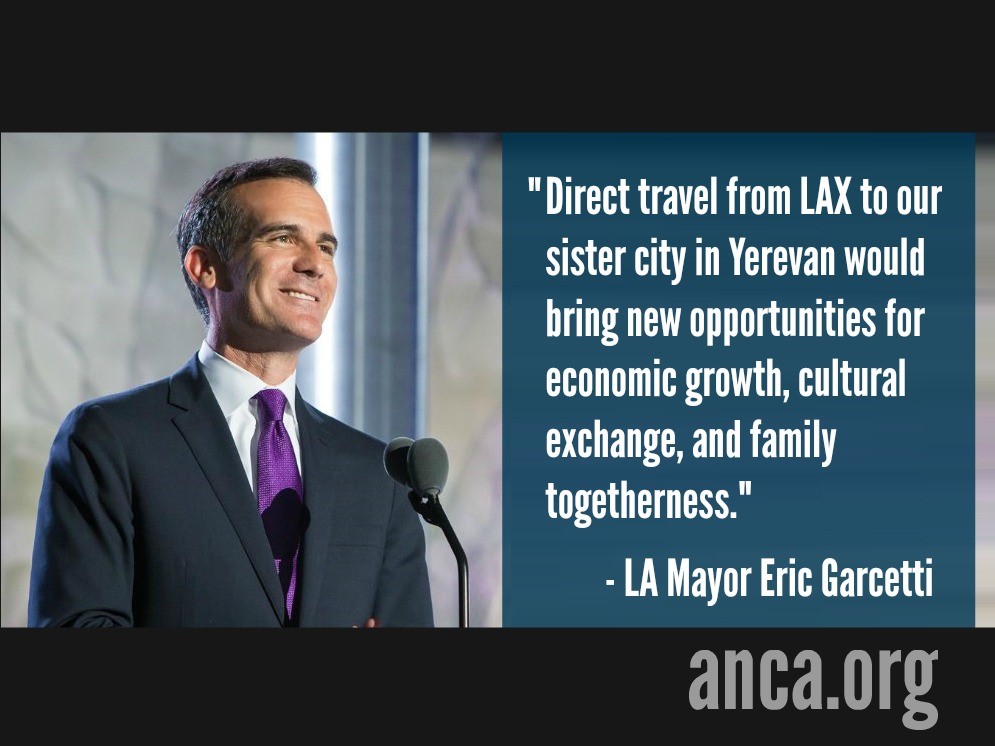 Washington, DC – The Armenian National Committee of America (ANCA) is continuing its engagement with key government, business, and civil society stakeholders in both Armenia and the United States to establish non-stop flights between Los Angeles International Airport (LAX) and Zvartnots International Airport (EVN) in Yerevan, Armenia with a U.S. carrier.

Zanku Armenian, who is leading the ANCA’s effort and Zareh Sinanyan, Glendale, California City Council Member recently traveled to Yerevan to discuss with officials the practical steps necessary to establish this proposed flight route. Pasadena Mayor Terry Tornek was also in Yerevan on an official visit at the same time, arranged by the ANCA Pasadena chapter. Tornek and Sinanyan serve together on the Burbank Hollywood Airport Commission, as President and Vice President, respectively. The meetings in Yerevan build on discussions ANCA officials had earlier this year with LAX CEO Deborah Flint.

Los Angeles is home to the largest concentration of Armenian-Americans in the United States. This ambitious undertaking to establish a global direct link between Los Angeles and Yerevan comes at a time when LAX is going through a massive $14 billion dollar makeover, turning it into a world-class airport — while the Southern California region also prepares to host the Olympic Games in 2028. LAX is already the number one destination airport in the country, with more flights originating and ending there than any other airport.

“L.A. has strong and lasting bonds with the people of Armenia,” said Mayor Eric Garcetti. “Direct travel from LAX to our sister city in Yerevan would bring new opportunities for economic growth, cultural exchange, and family togetherness.”

“We see an eagerness on the part of all officials to work with the ANCA to explore this creative initiative,” said Mr. Armenian, “because linking the largest Armenian-American diaspora community in the United States with Armenia will boost tourism and business opportunities in both Los Angeles and Armenia.”

In Yerevan, consultations began with the Chairman of the State Revenue Committee, Vardan Harutyunyan. He welcomed the positive economic impact this flight would have on both regions. In addition to pledging his support, Mr. Harutyunyan encouraged continued direct contacts with government officials in Yerevan, including helping to bring appropriate stakeholders in Armenia together to further evaluate the financial feasibility of this endeavor.

Discussions were also held with Sergey Avetisyan, Director General of Civil Aviation for Armenia. Mr. Avetisyan reiterated that establishing non-stop airline service with the U.S. has long been a goal, especially as passenger traffic to Yerevan continues to grow at a rapid pace year-over-year. Mr. Avetisyan acknowledged that all the technical pre-conditions already exist for Armenia to accept the type of large aircraft it would take to make such a long journey. This includes the Boeing 777 aircraft which currently already lands at Zvartnots Airport. Mr. Avetisyan also expressed confidence that any additional levels of security certification required by international and U.S. authorities to allow for non-stop flights between Armenia and the U.S. could easily be met, as Armenia already maintains a high degree of security at its airport in Yerevan.

The group also met with Andranik Shkhyan, Deputy General Manager at Zvartnots International Airport, who was also enthusiastic about establishing non-stop US-Armenia airline service. He advised that he was also taking active steps to promote this effort by sharing relevant information with certain U.S. carriers. Mr. Shkhyan pledged to collaborate with the ANCA to further promote this non-stop flight goal within aviation circles to attract possible new airline service.

Lastly, a meeting was held with Zarmine Zeitountsian, Chairperson of the State Committee for Tourism, which is part of the Ministry of Economic Development and Investments of the Republic of Armenia. Ms. Zeitountsian also welcomed the creation of non-stop airline service with the U.S. and offered the full support of her office in pursuing this effort, as it aligns with the Committee’s mission to promote increased tourism to Armenia.

“This round of direct meetings with Armenian government officials in Yerevan was an important step in laying the groundwork for future steps that will need to be taken,” said Zanku Armenian of the ANCA. “The next critical steps include the need for a detailed financial feasibility study and other economic impact studies that will be used in discussions with possible investors and U.S. carriers that could serve the new route,” Armenian continued.

While the meetings were being held in Armenia, the ANCA also briefed members of the U.S. Congressional delegation that visited Armenia and Artsakh the following week. These and previous congressional briefings intend to secure support from various Members of Congress who can help with the appropriate U.S. federal agencies that would need to be involved in this process.

The ANCA plans to continue pursuing this bold initiative working with relevant government officials in the United States and Armenia. The ANCA’s effort aims to ensure a methodical, integrated and professional approach between the government and private sectors that is necessary to attract the serious interest of U.S. carriers.