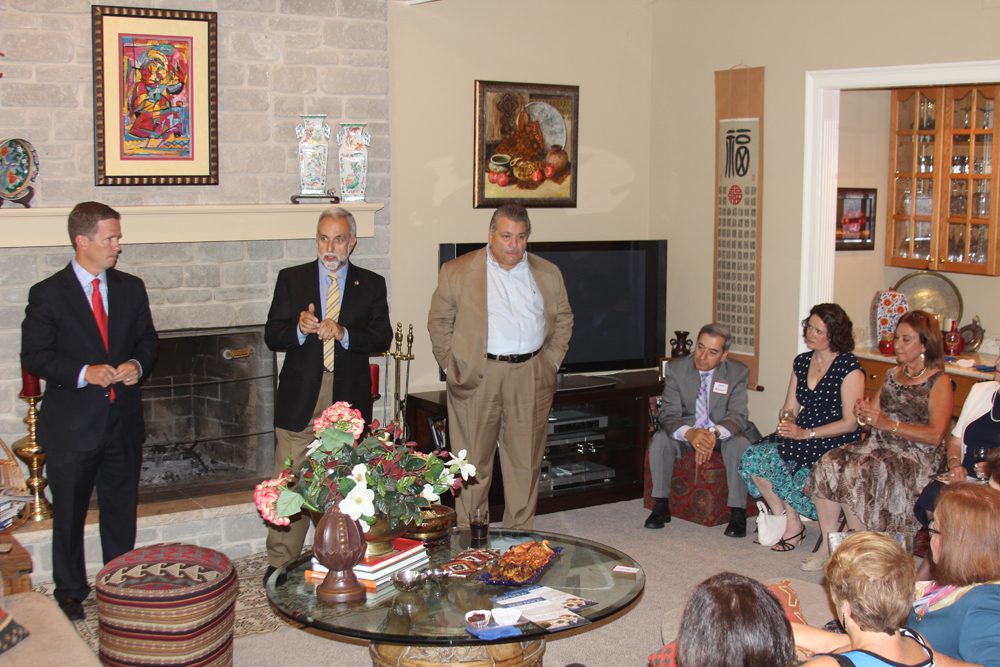 WASHINGTON, DC – With the 2014 Congressional elections less than 40 days away, the Armenian National Committee of America (ANCA) has endorsed longtime Armenian American issues supporter Robert Dold in his bid to reclaim his seat in Illinois’ 10th Congressional District.

“The ANCA is proud to endorse Robert Dold as the clear choice to represent the 10th Congressional District’s views and values related to Armenian American concerns,” said ANCA Chairman Ken Hachikian, who lives in the district. “We look forward to sharing his excellent responses to the ANCA Candidate Questionnaire as broadly as possible and to ensuring that our community makes an informed pro-Dold decision on Election Day.”

“Mr. Dold has been a strong advocate of issues important to Armenian Americans and has proven to be a compassionate crusader for human rights and a tireless advocate for justice,” explained ANC Illinois Chairman Mike Demirjian. “He is honest, reliable, and willing to work with us on tough issues that matter to the Armenian community.”

Dold’s responses to the ANCA 2014 Candidate Questionnaire restated his unequivocal support for Armenian Genocide recognition and restitution by Turkey, Nagorno Karabakh’s right to independence and U.S. support for the beleaguered Armenian and other Christian communities in the Middle East.

Asked if he would support legislation advancing a truthful and just resolution of the Armenian Genocide, Dold’s response was a clear and concise, “Yes, Turkey must acknowledge this tremendous crime without reservation and make full restitution.” Dold went on to call for Turkey’s “immediate return” of all confiscated Armenian, Greek and Syriac religious properties.

Referring to Artsakh as a “beacon of democracy,” Dold noted “I absolutely support self-determination by the Nagorno Karabakh to advance their own security and democratic development.” Dold argued to zero-out military aid to Azerbaijan “as long as it remains aggressive in its approach to Nagorno-Karabakh an Armenia.”

Commenting on the dire situation of Christian and other at-risk communities in the Middle East, Dold noted that they need “the full support of the United states, European Union and United Nations.”

Dold’s complete responses to the 2014 ANCA Candidate Questionnaire are available at: http://www.anca.org/election2014/Dold_R-IL-10.pdf

Dold, who served as Republican Vice-Chair of the Congressional Armenian Caucus, completed his first term in the U.S. House of Representatives in 2012 with an “A+” rating from the ANCA for his consistent support and leadership on issues of concern to the Armenian American community. He joined long-time Armenian Genocide Resolution lead sponsor Adam Schiff (D-CA) in spearheading this key human rights legislation (H.Res.304) in the 112th Congress. He spoke out against Secretary Hillary Clinton’s misrepresentation of the Armenian Genocide as a matter for “historical debate,” joining with over 60 of his colleagues in co-signing a letter of protest regarding her statements at a State Department Town Hall meeting. He was also an early supporter of a measure calling on Turkey to return stolen Christian properties to their rightful owners (H.Res.306), which was adopted by the House of Representatives in December of 2011.

In a statement offered in memory of the victims of the Azerbaijani pogroms against Armenians in Sumgait, Baku and Kirovabad in 2012, Rep. Dold noted “I stand with the Armenian community around the world to remember all those who were taken from their homes and from their families – simply because of their ethnic background. As we remember those who lost their lives in Sumgait, we must continue to guard against all discrimination, oppression, and targeted violence against ethnic groups around the world.”