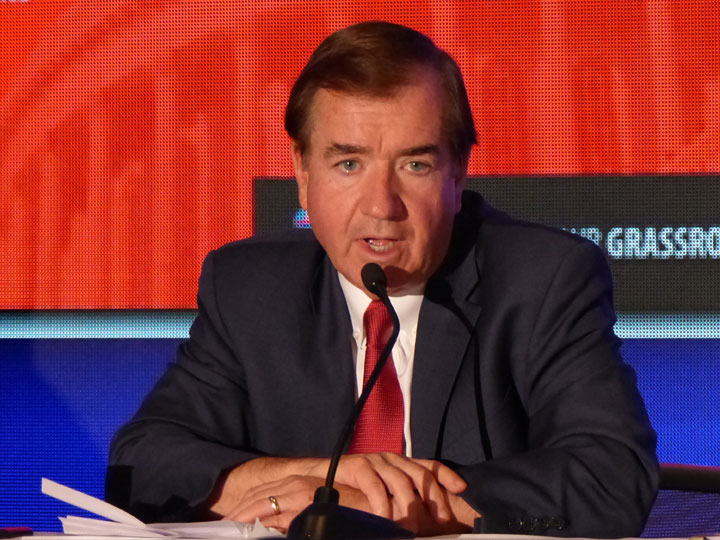 WASHINGTON, DC – Congressman Ed Royce (R-CA), Chairman of the House Foreign Affairs Committee has called the Royce-Engel proposals the “first order of business” regarding Artsakh peace process, renewing his drive for the timely implementation these three ANCA-backed cease-fire monitoring initiatives to hold Azerbaijan accountable for its cross-border attacks into both Armenia and Artsakh, reported the Armenian National Committee of America (ANCA).

Chairman Royce reaffirmed his strong support for these life-saving initiatives during his remarks, alongside Congressman Adam Schiff (D-CA), at an ANCA-Western Region Grassroots Conference panel titled, “Politics in Action: Congress on our Side,” moderated by Politico’s Senior Politics Editor Charlie Mahtesian.

Speaking about the deployment of gunfire locator systems along the line of contact, one of the key elements of the Royce-Engel plan, Chairman Royce noted: “We will introduce equipment that can pick up the direction of artillery shells or mortars and attach responsibility to where they’re being fired from,” stressing that: “It seems to me that’s the first order of business.”

“We echo Chairman Royce’s powerful call for the Royce-Engel proposals – three accountability-driven initiatives, backed by the Armenian side but rejected by Azerbaijan – that will, when implemented, confirm what everyone already knows – namely that Ilham Aliyev is behind every new cross-border attack and military escalation,” said Aram Hamparian, Executive Director of the ANCA. “Strengthening the cease-fire is, as Chairman Royce said, clearly the first order of business, because, without peace on the ground, we will never reach a durable and democratic peace at the negotiating table.”

Video excerpts of Rep. Royce’s remarks, first broadcast live on Facebook by Asbarez, is available at:

The Royce-Engel proposals, which Chairman Royce launched in partnership with the Ranking Democrat on the House Foreign Affairs Committee, Rep. Eliot Engel (D-NY), enjoy broad bipartisan Congressional support, has been endorsed by the U.S. State Department, backed by the OSCE, and accepted by both Armenia and Artsakh, are only opposed by Azerbaijan, which continues to obstruct their implementation.

The three common-sense elements of the Royce-Engel plan are:

— An agreement from all sides not to deploy snipers, heavy arms, or new weaponry along the line of contact.

— The placement of OSCE-monitored, advanced gunfire-locator systems and sound-ranging equipment to determine the source of attacks along the line of contact.