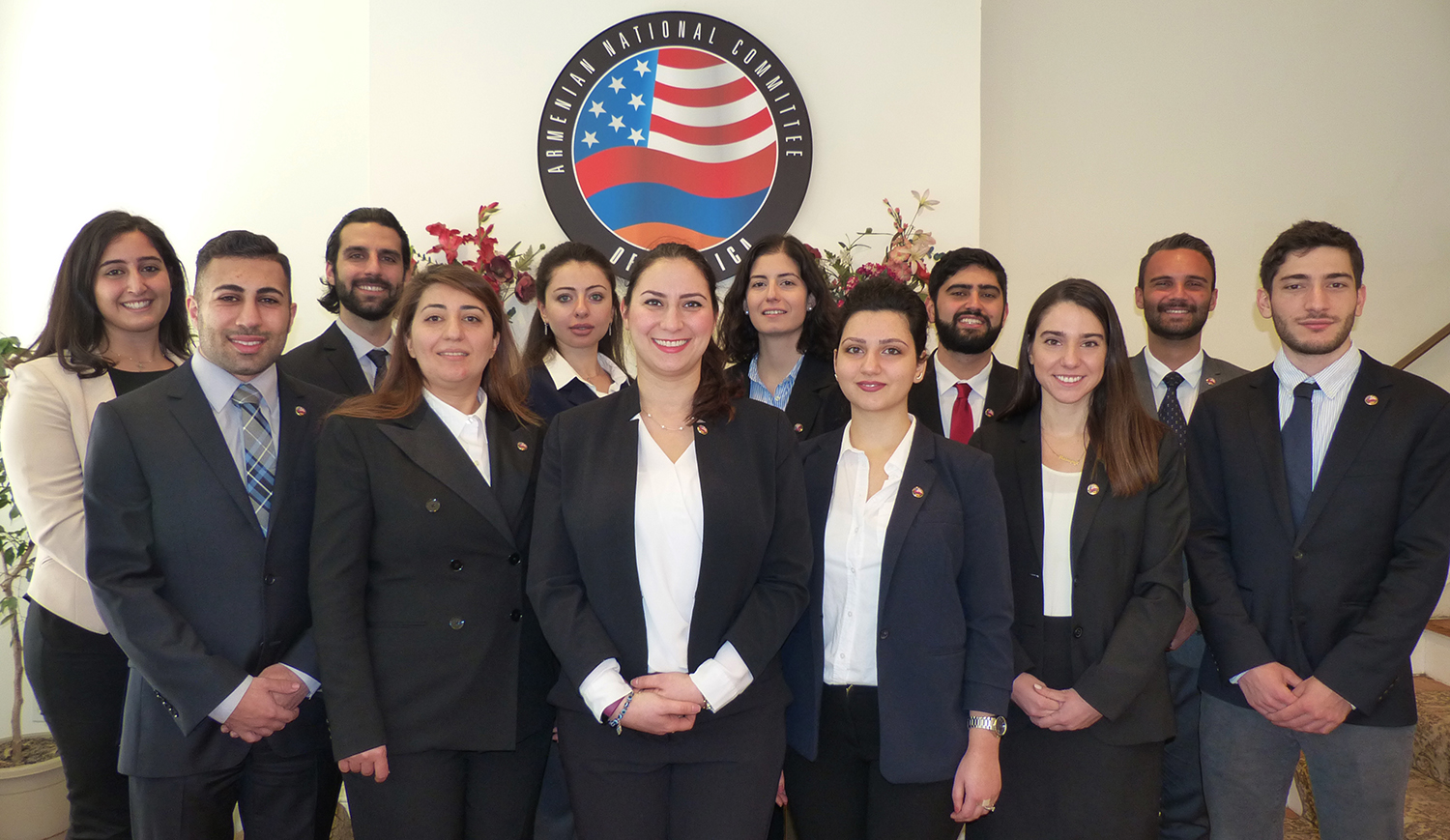 WASHINGTON, DC – A record class of eleven graduates from top universities across the United States, Australia, Canada, and Armenia have arrived in Washington, DC as the Armenian National Committee of America (ANCA) kicks off its Winter 2019 session of the Hovig Apo Saghdejian Capital Gateway Program (CGP). This is the largest class of fellows in the program’s 16-year history.

These highly educated, ambitious and articulate young professionals, with backgrounds in fields ranging from political science and international relations to economics and environmental studies, are now part of the robust community of Armenian Americans in the public policy, political, government, communications, and international development worlds of the nation’s capital.

“We are impressed by the incredible talent of our largest ever class of Fellows and eager to help these goal-oriented graduates start their careers in our nation’s capital,” remarked ANCA CGP Director Tereza Yerimyan. “We are looking forward to our expanded seminar series – led by program alumni – and to the full array of career services offered by our staff and the many DC-area professionals who volunteer their time to help the next generation.”

Yerimyan kicked off the Winter 2019 CGP session with a day-long orientation briefing capped by an alumni mixer event led by the CGP Advisory Committee (CGPAC). Current fellows participated in a “speed networking” environment, meeting with over 20 program alumni who are now working on Capitol Hill, at think tanks, and in consulting and development companies throughout Washington, DC.

Yerimyan and the CGPAC have been providing targeted guidance to the fellows through intensive seminars on resume development, cover letter writing, interviewing and networking skills. The fellows have already been applying lessons learned as they begin their job search process.  The CGPAC will also be launching a career development series, open to program alumni and DC-based Armenian American professionals, sharing the expertise of international development, government, and consulting sector leaders on career expansion opportunities.

Alex Avaneszadeh received a Bachelor of Arts degree in Political Science and International Relations at California Lutheran University. He aims to enter the international diplomacy field, with the goal of working at the United Nations and focusing on geopolitics in the Middle East and the Caucasus. Alex previously served as a Congressional intern on Capitol Hill, and a civil society intern at the Eurasia Partnership Foundation in Yerevan, Armenia. He is also a professional musician and researcher of ethnomusicology, which he uses as a tool for community engagement and cultural education.

Bianca Bernardi received a Bachelor of Arts degree in Political Science from Fordham University, with a minor in Philosophy. She aims to enter the legal field, with a concentration on international law. Bianca previously volunteered and worked as a legal assistant in Yerevan, Armenia.

Alexander Galitsky received a Bachelor of Political, Economic and Social Sciences (Hon I) at the University of Sydney, Australia. He aims to become a government relations specialist, and is exploring opportunities in international development. Alex previously served as a research assistant with the Armenian National Committee of Australia, the Armenian Ministry of Diaspora, and a range of NGOs across Australia and Armenia. Through those experiences, Alex has developed experience in the fields of advocacy, research & analysis, and community relations.

Natalie Manukian received a Bachelor of Arts degree in Economics and Environmental Studies at McGill University. She aims to work at the intersection of environmental advocacy, social policy, and sustainable design solutions that address both climate change and urbanization. Natalie previously worked as the communications coordinator for a Canadian inter-university team competing in the 2018 Solar Decathlon China. Most recently, she interned at the American University of Armenia’s Communications Department and at the Urban Foundation for Sustainable Development in Yerevan, Armenia.

Mikael Matossian received a Bachelor of Science degree in Environmental Science at the University of California, Los Angeles, and a Master of Science degree in Energy Science, Technology & Policy at Carnegie Mellon University. He aims to work at the intersection of energy technology and policy in the international development space. Mikael previously worked at the United Nations Development Program’s Office of Information Management & Technology in Copenhagen, Denmark and served as a CivicSpark AmeriCorps Fellow at the City of Santa Monica, CA.

Marc Papazian received a Bachelor of Arts degree in Economics and East Asian Studies at Harvard University. He aims to work in foreign policy. Marc previously worked as a product manager at A3Ventures, the American Automobile Association (AAA)’s innovation lab, in San Francisco, CA. Prior to that, he served as the deputy chief of staff to the CEO of the company.

Allen Sarkissian received a Bachelor of Science degree in Business Administration with a concentration in Finance at San Diego State University. He aims to work on management in the real estate or technology industries. Allen previously worked as an assistant account manager at Global Business Management in Los Angeles, CA. He also worked as an account manager at WineWorks, a custom wine incubator, and assistant general manager for the National Opera Theater of Armenia in Yerevan, Armenia.

Karoun Tcholakian received a Bachelor of Arts degree in International Relations, with minors in Arabic and Human Rights from Grand Valley State University. She aims to work with vulnerable communities, towards achieving her long-term career goal of translating in the Middle East. Karoun previously volunteered in Lebanon with Salam, an NGO that provides assistance to Syrian refugees and low-income Lebanese families. She recently got off the campaign trail with Congresswoman Sharice Davids in Kansas.

Mane Voskanyan received a Bachelor of Arts degree in Economics Department at the French University in Armenia.  She aims to identify and implement innovative technology solutions that align with corporate goals. Mane is a highly motivated data analyst with strong computer skills.

Launched in 2003, the ANCA Hovig Apo Saghdejian Capital Gateway Program (CGP) helps secure permanent employment and professional internships in Washington, DC for young Armenian American professionals and students. Through the years, the ANCA has developed many relationships in and around Capitol Hill and identified a wide range of opportunities in the Washington, DC area.  The CGP utilizes these resources and contacts to help candidates identify and secure jobs that fit their interests and needs.

The Program is named after Hovig Apo Saghdejian, a beloved young community leader who lost his life in a tragic car accident and whose eternal memory continues to inspire new generations of Armenian Americans.  His family generously established the Hovig Apo Saghdejian Memorial Fund in his memory and, over the past decade, has played a vital role in the expansion of the program. Substantial support has also been provided by the Kirk Kerkorian’s Lincy Foundation, Gerry Cafesjian, Julian and Annette Setian, the Norman K. Miller Charitable Fund, Frank and Barbara Hekimian, and the Armenian American Veterans Post of Milford, Massachusetts.

Program fellows and interns stay at the ANCA’s Aramian House, made possible through a generous donation by the family of the late community leader and philanthropist Martha Aramian of Providence, R.I. The Aramian family – led by sisters Sue, the late Margo, and the late Martha – have long been among the most generous benefactors of ANCA programs as well as of charitable projects in the Armenian homeland and the diaspora.