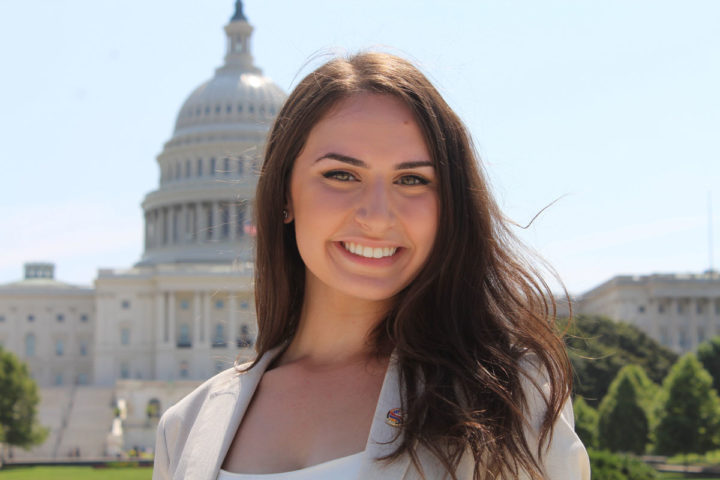 NEW YORK, NY – Armenian National Committee of America’s Eastern Region will recognize the Eastern region interns from the 2018 Leo Sarkisian Summer Internship program – Antranig Kechejian (MA), Victoria Messikian (NJ), and Adrienne Tazian-Schwartz (IN) – at the 12th annual ANCA Eastern Region gala on Saturday, October 13 at the Grand Hyatt Hotel in New York City. This year’s gala will include a cocktail hour and silent auction at 6:00 p.m. and dinner and program at 7:30 p.m.

Founded in 1986, the ANCA LSI program is named in memory of the late ANCA Eastern region community leader Leo Sarkisian. LSI provides students from both the Western and Eastern U.S. and Canada with an opportunity to participate in an eight-week intensive program in Washington, D.C., designed to give them the tools to advance issues of concern to the Armenian American community on the federal, state and local level. Now in it’s 32nd year, the program has hundreds of alumni across the world.

“We are looking forward to honoring our youth at this year’s gala. They are the next generation of activists and we are so proud of the work they and past interns did during their program and continue to do,” commented Steve Mesrobian, ANCA Eastern Region chairman. “All past interns are invited to attend and reflect on what a remarkable program the ANCA offers for our youth to see what their advocacy efforts can produce.”

Kechejian (MA), Messikian (NJ) and Tazian-Schwartz (IN) joined three other interns from the Western Region, U.S. as they experienced the many facets of Washington D.C. From welcoming the President of Armenia in his first diplomatic visit to the U.S. to celebrating 100 years of U.S.-Armenia relations to attending the Smithsonian’s FolkLife Festival to advocating on Capitol Hill, the interns learned how to effectively communicate Armenian American priorities to members of Congress among others.

Aside from their group efforts, the interns also worked on their own projects throughout the eight-week program. Kechejian and Tazian-Schwartz worked closely with ANCA IT Director Nerses Semerjian to strengthen the ANCA’s advocate outreach infrastructure. Messikian worked alongside Chris Khachadour (an intern from the Western region) on expanding the ANCA’s Rapid Responder Program.

Messikian will join ANCA Programs Director Tereza Yerimyan in speaking about the program and it’s impact at this year’s gala. This year will mark the first year that the ANCA Eastern Region will recognize its interns, but will make it an annual tradition at the gala.

“It is certainly an honor to be part of this year’s annual gala and celebrate our efforts alongside my fellow interns and the Eastern Region. Our time in our nation’s capital was incredible and the tools we acquired will no doubt impact the work we do back home for years to come,” said Messikian, LSI Class of 2018.

For more information about this year’s gala and to purchase tickets, please visit www.ancaef.org/gala or call 201-788-5425.