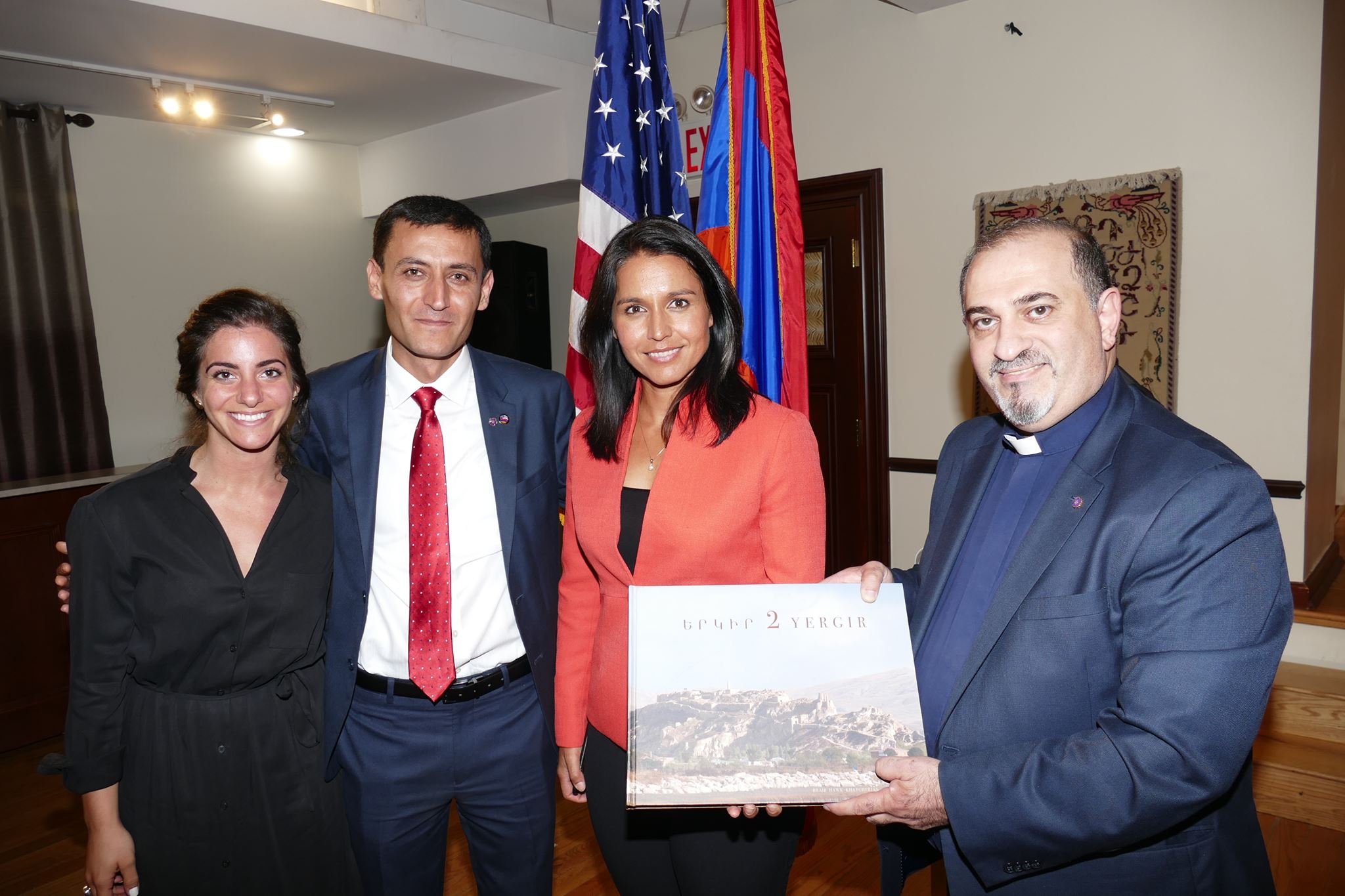 Rep. Gabbard Meets with the East Coast Armenian-American community Ahead of Her Upcoming Congressional Visit to Armenia

The New York community gathering follows an earlier meeting held in Los Angeles organized by ANCA Western Region. In August, Rep. Gabbard co-sponsored H.Res.220, which among other matters, calls for the “proper commemoration and consistent condemnation of the Armenian Genocide,” and has joined the Congressional Armenian Caucus.

“Considering Congresswoman Tulsi Gabbard’s principled approach to human rights and foreign policy issues, coupled with her deep knowledge about the Middle East, it is no surprise to the Armenian-Americans that she stands on the right side of the history and raises her voice on issues important to our community,” noted ANCA Eastern Region’s (ANCA-ER) Community Outreach and Communications Director Dr. Artur Martirosyan. “We are encouraged by Rep. Tulsi Gabbard’s expressed interest in Armenian-American policy priorities, especially as it comes to the self-determination and independence for Artsakh Republic, truth and justice for the Armenian Genocide, and stronger U.S.-Armenia strategic partnership.”

Rev. Fr. Mesrob Lakissian, pastor of St. Illuminators’ Cathedral, offered opening remarks and a prayer in the memory of all the innocent victims of the 9/11 terrorist attacks. In her remarks and subsequent Q&A session, Rep. Gabbard touched upon the current state and future prospects of U.S.-Armenia strategic partnership, the ongoing security challenges in Armenia and Artsakh, Turkish government’s denialism of the Armenian Genocide as well as the Turkish blockade against Armenia. She shared news of her upcoming Congressional delegation trip that she sees as an opportunity to learn more about Armenia, its history, culture, current regional geopolitical challenges, etc. Rep. Gabbard also shared her work in fighting for the protection of Christians, Yezidis, and other minorities in the Middle East as well as the re-affirmation and international condemnation of the Armenian Genocide.

“The Armenian National Committee of America has done great work in helping to shed light on the need for the United States and the global community to recognize the genocide committed against the Armenian people. I’m grateful to hear from Armenians both at home and abroad about their interests and concerns, and how best we can work together,” said Congresswoman Tulsi Gabbard. The event concluded with closing remarks offered by Martirosyan, who wished Congresswoman safe and enjoyable travels to Armenia with the hope that she will convey back her impressions regarding her trip to the region.

Tulsi Gabbard grew up in Hawaii and was elected to the Hawaii State Legislature in 2002 when she was just 21 years old, becoming the youngest person ever elected in the state. A year later, she joined the Hawai‘i Army National Guard to serve Hawaii and our country. In 2004, Tulsi volunteered to deploy with her fellow soldiers, becoming the first state official to voluntarily step down from public office to serve in a war zone. She served two tours of duty in the Middle East, and she continues her service as a Major in the Army National Guard. In between her two tours, Tulsi served in the U.S. Senate as a legislative aide to Senator Daniel Akaka (D-Hawaii), where she advised him on energy independence, homeland security, the environment, and veteran issues. While working for Senator Akaka in 2007, Tulsi graduated from the Accelerated Officer Candidate School at the Alabama Military Academy, where she was the first woman to finish as the distinguished honor graduate in the Academy’s 50-year history. Tulsi was commissioned as a Second Lieutenant and assigned to the 29th Brigade Special Troops Battalion of the Hawaiʻi Army National Guard—this time to serve as the Military Police Platoon Leader.

In 2010, Tulsi Gabbard was elected to the Honolulu City Council, serving as Chair of the Safety, Economic Development, and Government Affairs Committee and Vice Chair of the Budget Committee. Tulsi was elected in 2012 to the United States House of Representatives, serving Hawaii’s 2nd District. She is one of the first two female combat veterans to ever serve in the U.S. Congress, and its first Hindu member.

Now in her third term in Congress, Gabbard serves on both the House Armed Services Committee and House Foreign Affairs Committee.

The ANCA-ER is the largest and most influential Armenian-American grassroots advocacy organization in the Eastern United States. Working in coordination with a network of local ANCs and advocates around the country, the ANCA-ER advances the concerns of the Armenian American community on a broad range of issues.