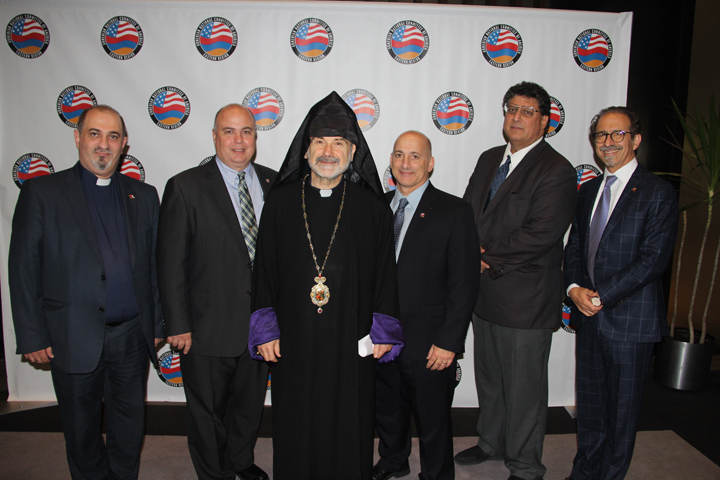 NEW YORK, NY – Hundreds of community leaders and grassroots advocates from throughout the Eastern United States gathered together at the 12th annual Armenian National Committee of America Eastern Region’s Gala on Saturday, October 13, 2018 at the Grand Hyatt in New York City to mark 100 years of Armenian-American political advocacy, celebrating the year’s progress and honoring those whose work significantly impacted the Armenian Cause.

This year’s honorees included Oscar-winning director Terry George and producer Dr. Eric Esrailian for their work on the film “The Promise,” and community activist and educator Ken Sarajian. Also recognized were the 2018 ANCA Leo Sarkisian Internship participants Antranig Kechejian, Victoria Messikian and Adrienne Tazian-Schwartz.
Special guests included H.E. Mher Margaryan, Armenia’s Permanent Representative to the United Nations, Mr. Robert Avetisyan, Republic of Artsakh’s Permanent Representative to the United States and Dr. Khatchig Mouradian, Armenian Revolutionary Federation Bureau Member.
Sarah Leah Whitson, Executive Director of the Middle East and North Africa (MENA) Division for Human Rights Watch served as master of ceremonies for the gala. Following the singing of the national anthems of the U,S. and Armenia by Hooshere Bezdikian and the invocation by His Grace Bishop Anoushavan Tanielian, Prelate, Whitson noted how 2018 marked the 100th anniversary of the formation of the American Committee for the Independence of Armenia, the forerunner of the ANCA, in 1918. She highlighted that among the ANCA’s strengths today was the broad diversity of its supporters; its ability to unify people across multiple generations, from varied geographic and professional backgrounds, and from across the political spectrum to work for Hai Tahd, the Armenian Cause.

“On behalf of the ANCA Eastern Region board, I would like to congratulate all of the honorees and thank all those who attended and who helped make our 12th annual gala such a success, particularly our gala committees” said Audrey Mardoian, ANCA Eastern Region board member. “We were heartened by the large number of youth who attended, and are confident that the future of Hai Tahd work is in good hands,” she concluded.

George and Dr. Esrailian helped fulfill the vision of the late Kirk Kerkorian – educating the public about the perseverance of the Armenian nation through the internationally recognized film, “The Promise.” Furthering their initiative, the proceeds of the film were used to establish The Promise Institute for Human Rights at UCLA School of Law. In their remarks, both George and Dr. Esrailian commended the ANCA on its help in promoting the film.

In his remarks, George said, “We have endured so much together… the Irish, the Rwandans, the Armenians…That suffering defined our people and it defined us as we traveled around the world. And you look now and the diaspora of the Irish and the diaspora of the Armenians are some of the strongest cultures and people around the world… That feeling of community is what drove me, along with Eric and all of our crew to make this film. We created something that is a learning tool that is eternal… it’s there to teach our children and to teach people who don’t know. One of the most gratifying things about making this film is when people come up afterwards and say I didn’t know this happened… because we are spreading the word… about what happened in the past, but what can’t happen again in the future.”

In his videotaped message accepting the award, Dr. Esrailian, discussed the pressure and obstacles they had to overcome when filming “The Promise.” He thanked George and all who made the film possible, spotlighting Kirk Kerkorian who he called the “dearest hero of the Armenian nation… for making it all possible.”

“The film has truly exceeded our expectations. There has been an overwhelming amount of attention and awareness of the Armenian Genocide since the launch of the film. And we were able to create a movement to keep the promise, to never forget the Armenian Genocide and to hopefully shine a light and prevent future atrocities,” Dr. Esrailian said.

The Vahan Cardashian Award is given annually to an ANCA-ER activist or supporter who demonstrates longstanding accomplishments on behalf of the Armenian Cause. This year, the ANCA-ER honored Ken Sarajian, an educator and life-long Hai Tahd activist. Along with building key congressional relationships throughout the years, he more recently joined Shant Mardirossian to promote a new Armenian Genocide curriculum at the New Jersey Council of Social Studies, educating teachers on the life-saving efforts of Near East Relief during the Armenian Genocide. Sarajian continues to work diligently within the Armenian community and in his chosen field of public education to promote civic activism and awareness.

In his comments, Sarajian recognized activists of the past such as Leo Sarkisian and those of the present saying, “This is us doing this stuff together. It is about the people we meet. If we ever think it’s about what we do, we’re wrong… it’s about why we do it… this is us. It’s not just me. It’s what you guys do. So this is my journey. I am a storyteller who tells our story now. Whether it’s in the classroom, Congress or the state legislature, the story is not just about what happened 100 years ago, it’s about what’s happening today as the genocide continues…”

Audrey Mardoian, ANCA ER board member delivered the ANCA Eastern Region’s message. She opened her remarks asking those present to rise and join in a moment of silence in memory of 27-year-old ANCA activist Movses Ter-Oganesyan, who passed away earlier in the week, and for 2016 Cardashian Award recipient Levon Palian, who passed away in September.

In her comments, Mardoian discussed many of the ANCA’s accomplishments; highlighting the work of local ANC’s such as Merrimack Valley’s Armenian Genocide education program, which was implemented at 50 area high schools. She reminded the audience of the upcoming elections in November, urging them to vote for ANCA-endorsed candidates.

Mardoian then introduced Victoria Messikian, who spoke on behalf of 2018 Leo Sarkisian summer interns: Boston University junior Antranig Kechejian, Fordham University junior Victoria Messikian, and Indiana University senior Adrienne Tazian-Schwartz. Messikian thanked the ANCA for having the opportunity to learn about the many facets of Hai Tahd during the Washington, DC-based internship, pledging that the next generation of ANCA activists is ready for the challenge. Following her comments, Tereza Yerimyan, Director of the ANCA Hovig Apo Saghdejian Capital Gateway Program and Leo Sarkisian Summer Internship Program, presented awards to the interns recognizing their participation in the program.

In his remarks, George Aghjayan, Chair of the ANCA Eastern Region Endowment Fund, stressed the importance of ANCA programs such as the Leo Sarkisian and Capitol Gateway, its expanding genocide education efforts and numerous other ANCA initiatives. He noted how the ANCA is preparing the next generation of ANC activists, and urged donors to continue and expand their support by contributing to the endowment fund.

The final speaker of the evening was ANCA National Board Chair Raffi Hamparian. Hamparian reflected on the impact that Cardashian honoree Ken Sarajian had on his own life as a youth in New Jersey, inspiring him to become a Hai Tahd activist. He outlined numerous important initiatives currently being pursued in Washington, DC, including support for demining efforts and a rehabilitation center in Artsakh, implementing stronger peace-keeping measures along the Line of Contact in Artsakh, increased U.S. funding for schools in Armenia, support for reforestation in Armenia, and pursuit of justice for the Armenian Genocide.

The evening also featured a silent auction, featuring numerous items donated from local Armenian and non- Armenian businesses and individuals, as well as organizations such as AYF Camp Haiastan and the ACAA Cruise Committee. Included in the items was a signed original script of the film “The Promise,” items autographed by Serj Tankian, sports memorabilia and many more.
For more information about this year’s gala, please visit www.ancaef.org/gala.