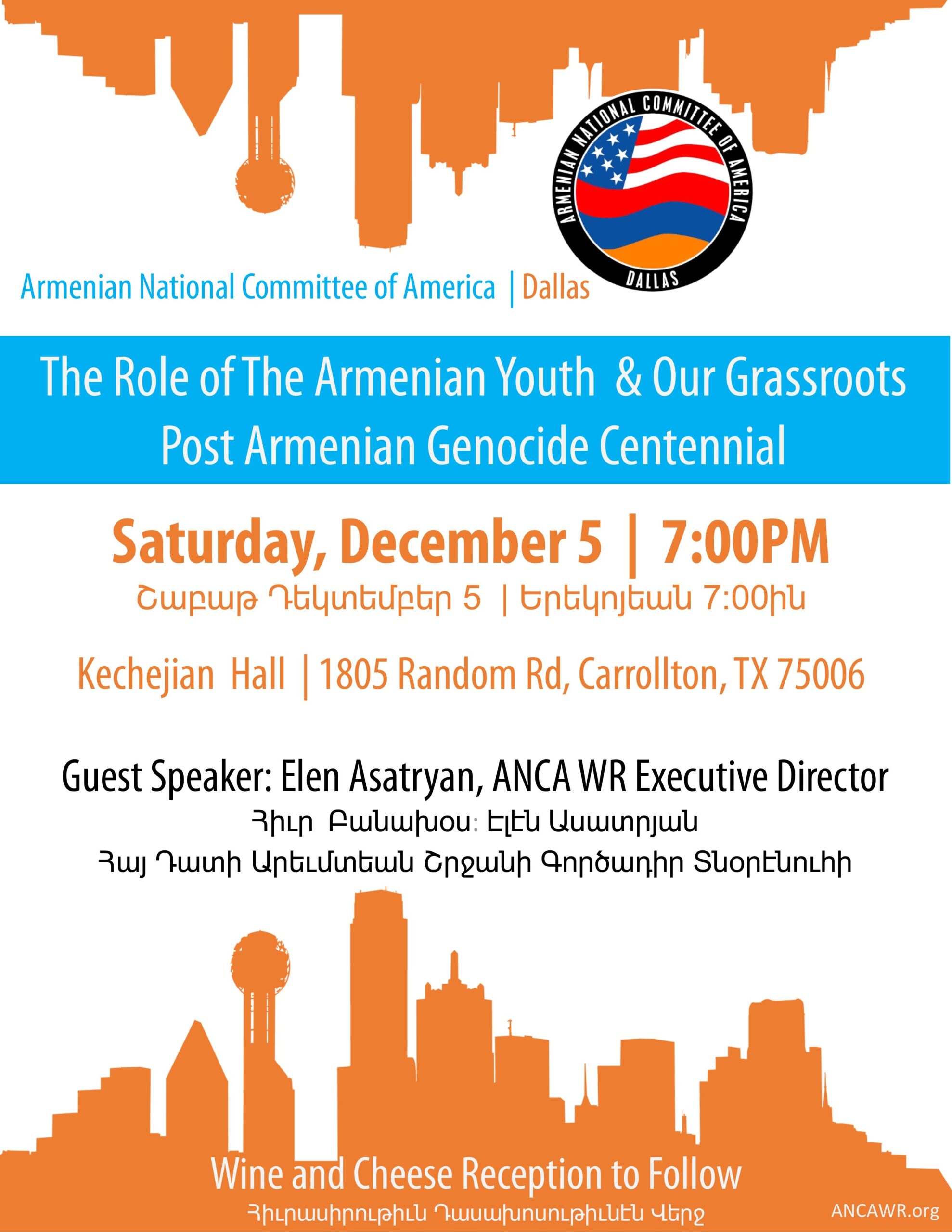 The Dallas chapter of the Armenian National Committee of America, established earlier this year, announced this week its first community event to discuss the role of grassroots and Armenian youth in the era of post-Centennial activism.

Expected to draw a diverse group of community members interested in learning about Armenian activism past this Centennial year of the Armenian Genocide, the Saturday, December 5 event will take place at the Dallas area Kechejian Hall (1805 Random Road, Carrollton, TX 75006). Keynote speaker Elen Asatryan, Executive Director of the Armenian National Committee of America, Western Region (ANCA-WR) will discuss regional priorities and strategies for engaging the Armenian American community in the democratic process. ANCA-Dallas Board Directors will speak about the broader commitment to Armenian issues, including ensuring security and peace for Armenia and Artsakh.

“This meet-and-greet is crucial for our Texas community, as it will be a learning experience for strengthening our ongoing activist efforts in Texas,” remarked ANCA-Dallas chair Lucia Nazarian. “Our Dallas community has been a dynamic cultural, religious and educational contributor in Northern Texas, and time is ripe to also strengthen our grassroots activism and amplify our voice in the political process. Texas Armenians demonstrated earlier this year that our united voice can defeat anti-Armenian propaganda in the state legislature and advance awareness of the Armenian Genocide despite the strong presence of Turkish and Azerbaijani lobbies. We have to work together for truth and justice.”

ANCA-Dallas is a chapter of ANCA-WR, the largest and most influential Armenian American grassroots advocacy organization in the Western United States. Working in coordination with a network of offices, chapters, and supporters throughout the Western United States and affiliated organizations around the country, the ANCA-WR advances the concerns of the Armenian American community on a broad range of issues.

Since its founding in 2015, ANCA-Dallas has co-organized Advocacy Day in Austin, helped pass Texas House Resolution 1541 in praise of Near East Relief 1915-1930 efforts to save “Armenians threatened with genocide in Turkey,” helped defeat anti-Armenian resolutions in the Texas legislature, and hosted an information booth at the annual Dallas ArmeniaFest in October.