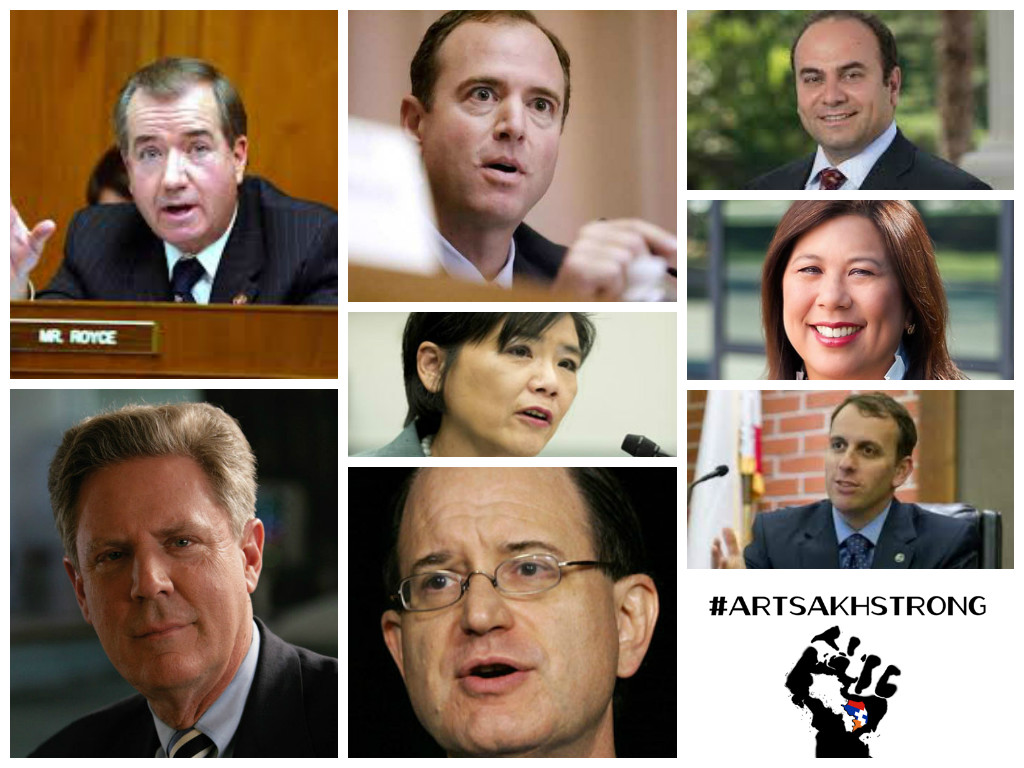 WASHINGTON, DC – Members of Congress continue condemning Azerbaijan’s latest escalation of anti-Armenian aggression, in the form of its introduction of surface-to-air missiles in a fatal attack this week on an unarmed helicopter flying over Nagorno Karabakh, reported the Armenian National Committee of America (ANCA).

“The downing of an Armenian helicopter today is an indefensible aggressive action that threatens to undermine the fragile ceasefire and plunge the region back into violence,” House Foreign Affairs Committee Chairman Ed Royce (R-CA) announced, just hours after the November 12th Azerbaijani attack. “Azerbaijan must immediately cease all such attacks and provocations and commit to concrete progress in the Minsk Group talks.”

Congressional Armenian Caucus Co-Chair Frank Pallone (D-NJ) noted that he was “outraged and saddened” and called for immediate U.S. action to hold Azerbaijan accountable for their action. “I encourage President Obama to formally condemn this deadly attack,” said Rep. Pallone. “I am also calling for the cessation of any military assistance to Azerbaijan and the strengthening of Section 907 of the FREEDOM Support Act, which restricts aid to Azerbaijan based on its aggression toward Nagorno Karabakh and Armenia.”

Rep. Adam Schiff (D-CA) noted that “The apparent shoot down of an unarmed helicopter over the territory of the NKR, demonstrates Azerbaijan’s callous disregard for human life and its willingness to engage in provocative acts of violence to distract from its domestic problems. This horrendous conduct threatens to destabilize the entire region.”

In a statement issued earlier today, Rep, Judy Chu explained “I am deeply troubled by the latest evidence of Azerbaijan’s continued aggression with their attack on an apparently unarmed helicopter. The people in Nagorno Karabakh deserve and desire peace, but Azerbaijan’s disregard for the 1994 cease fire threatens both sides with conflict.”

In less than two hours, the AYF Western US, Eastern US and Canada-led effort generated over 2,500 unique tweets viewed over 500,000 times on Twitter. Facebook and Instagram participation was robust as well. Participants were creative with their messaging, focusing on Artsakh history and the escalating campaign of Azerbaijani aggression. An AYF infographic on the helicopter attack called on the “international community to pursue sanctions on Azerbaijan.”

Support for the targeted online awareness campaign continues with a growing number of activists contacting their Members of Congress to condemn the attack by visiting the ANCA’s action center – www.anca.org/stopaliyev

California State Legislators Speak out Against the Attack

“My thoughts and prayers are with the families of Major Sergey Sahakyan, and the 2 members of the Artsakh Air Force who perished today,” said Assemblyperson Adrin Nazarian. “It is unconscionable that the Azerbaijani Armed Forces would shoot down an unarmed helicopter, during a routine exercise, in an unprovoked attack against Artsakh. In order to regain peace in the region, Azerbaijan needs to prove themselves as an equal partner of peace and immediately cease all aggregation against the people of Nagorno-Karabakh.”

CA Board of Equalization Member and Controller Elect Betty Yee shared her concerns regarding the most recent attack. “When life is threatened anywhere and citizens are left in fear, the possibility of peace becomes less hopeful. I join my elected colleagues around the world in denouncing this act of violence against Armenia. May peace reign within the borders, and may violence against any people and nation be condemned.”

Assemblymember Marc Levine tweeted, “If shown to be true, this unprovoked attack has the potential to destabilize an already unstable situation.”

Hamparian was forceful in his responses to weak Organization for Security and Cooperation in Europe (OSCE) and State Department responses to the helicopter shooting:

“The OSCE’s public response once again falls back into the deeply flawed pattern of placing equal blame on both sides for hostility that all the world knows is being directed by one man – Ilham Aliyev, the President of Azerbaijan.”