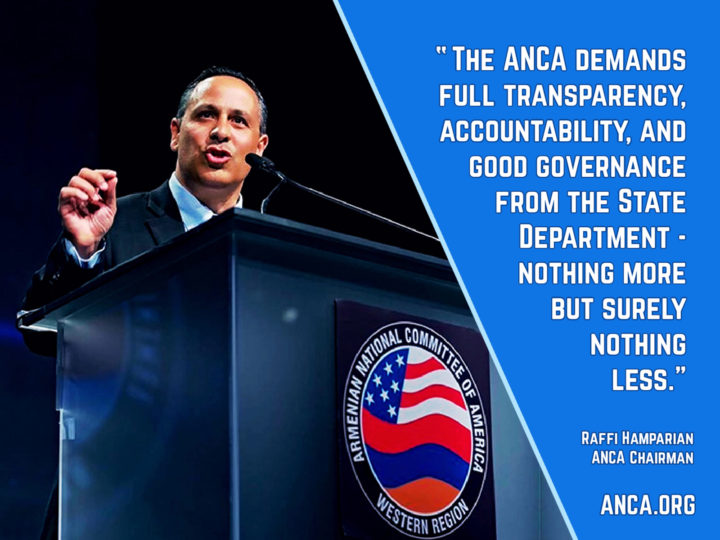 The Armenian National Committee of America (ANCA) is calling on key committees in the U.S. Senate and House to exercise their Congressional oversight responsibilities over the U.S. State Department and related agencies through investigations into system-wide failures of U.S. policy on U.S.-Armenia bilateral and regional relations.

“The ANCA demands full transparency, accountability and good governance from the State Department, nothing more but surely nothing less,” said ANCA Chairman Raffi Hamparian. “It is clear – from the State Department’s serious, system-wide failings prior to, during, and after Azerbaijan’s attack on Artsakh – that Congress needs to conduct a deep-dive investigation – shining a long overdue spotlight into this diplomatic disaster, holding those responsible to account.”

In October 7, 2021 letters to Senate Foreign Relations Committee Chair Bob Menendez (D-NJ), House Foreign Affairs Committee Chair Greg Meeks (D-NY) and key Committee members, ANCA Chairman Raffi Hamparian called for the inquiry into “multiple, fundamental, and repeated failures of U.S. bilateral relations with the Republic of Armenia and regional diplomacy prior to, during, and after Azerbaijan’s attack last September against the Republic of Artsakh and its ongoing attacks and occupation of Armenia.” The called-for investigation would review the conduct of the U.S. State Department and U.S. Agency for International Development with regard to shortcomings in a broad array of areas outlined by Hamparian, including:

— Failures to adequately prevent violations of Section 907 of the FREEDOM Support Act and other U.S. laws related to U.S. military aid to Azerbaijan.

— Failures to hold U.S. manufacturers, the Turkish government, and private sector stakeholders responsible for violations of U.S. laws related to the discovery of U.S. parts in Turkish drones deployed by Azerbaijan.

— Failures to confront Turkey or hold its leaders accountable for recruiting foreign terrorist fighters, including jihadists from Syria, to fight with Azerbaijani forces against Artsakh.

— Failures to confront Azerbaijan or to hold its leaders accountable for using cluster bombs, white phosphorous, and other prohibited munitions against Artsakh.

— Failures to confront Azerbaijan or to hold its leaders accountable for illegally holding, abusing, and even causing the deaths of Armenian Prisoners of War.

— Failures to confront Azerbaijan or to hold its leaders accountable for invading and occupying sovereign Armenian territory.

— Failures of the U.S. Co-Chair of the OSCE Minsk Group to adequately represent U.S. interests in a peaceful resolution of Artsakh-related status and security issues.

— Failures regarding U.S. government foreknowledge and/or fore-warning of Azerbaijan’s attack.

— Failures to provide anything approaching adequate levels of humanitarian assistance to the over 100,000 Armenians ethnically-cleansed from their indigenous Artsakh homeland.

The ANCA Chairman called specific attention to the effects of these diplomatic failures on the Organization for Security and Cooperation in Europe (OSCE) Minsk Group efforts to negotiate a peaceful settlement of the Artsakh (Nagorno Karabakh) crisis. “Failings of U.S. engagement have only invited malign actors – most notably Turkey – to violently project power into the Caucasus in a way that undermines U.S. interests and runs counter to our American values,” emphasized Hamparian.

The full text of the ANCA’s letter is available here.