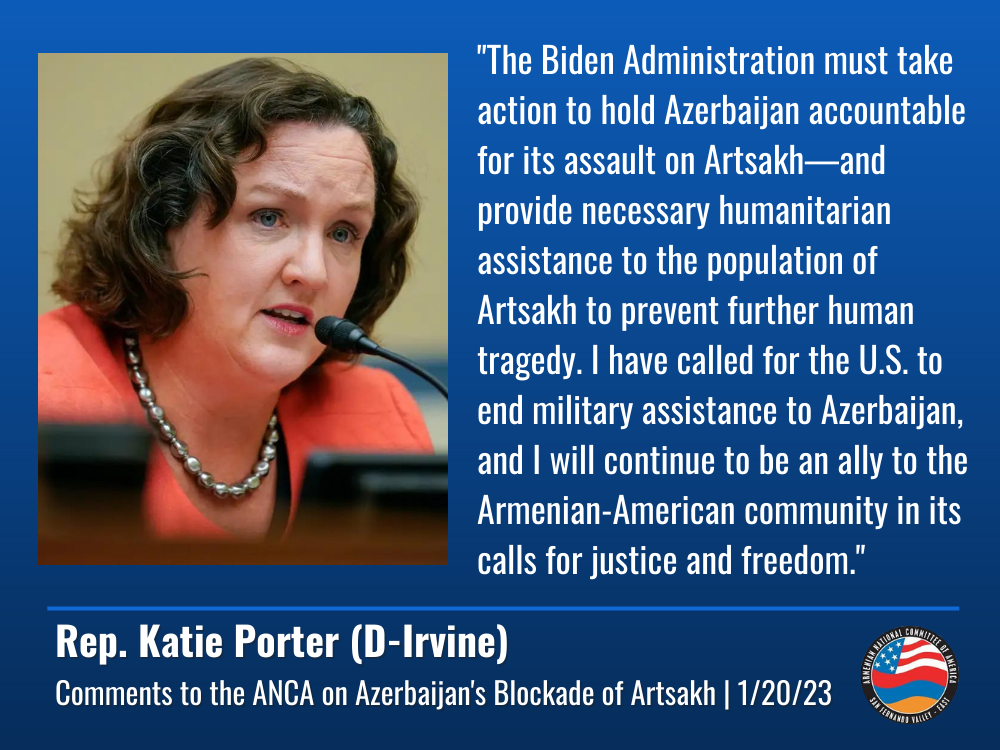 The need to hold Azerbaijan accountable for its 40-day blockade of the Republic of Artsakh, and ensure the provision of U.S. humanitarian assistance to its besieged population were discussed during an hour-long meeting with Congresswoman Katie Porter (D-Irvine) in a California state-wide ANCA meeting hosted by ANCA Orange County, with the participation of the Armenian National Committee of Artsakh (ANC-Artsakh) and ANCA National Board members and staff.

The meeting served as an opportunity to brief Congresswoman Porter on the unfolding humanitarian crisis in Artsakh, and the urgent need for the Biden Administration to sanction Azerbaijan for its brazen act of aggression, starting with cutting all military aid to the genocidal Aliyev regime. ANCA California leaders also called for an emergency U.S. aid airlift to Artsakh and to prepare wide-scale humanitarian assistance in Armenia for transport once the road to Artsakh is opened.

“I stand with the Armenian-American community in condemning Azerbaijan’s cruel and inhumane blockade of Artsakh,” said Congresswoman Katie Porter. “The Biden Administration must take action to hold Azerbaijan accountable for its assault on Artsakh—and provide necessary humanitarian assistance to the population of Artsakh to prevent further human tragedy.  I have called for the U.S. to end military assistance to Azerbaijan, and I will continue to be an ally to the Armenian-American community in its calls for justice and freedom.”

The briefing was led by ANCA Orange County, with Dr. Kev Abazajian offering opening remarks thanking Rep. Porter for her friendship and support of the Armenian-American community in the face of Azerbaijan’s unabated pattern of aggression against the Armenian people. ANCA Orange County was joined by leaders from across the ANCA family in California, including the ANCA’s San Francisco, Sacramento, Fresno, San Fernando Valley, Glendale, Burbank, La Crescenta, Pasadena, Hollywood, and San Gabriel Valley chapters. ANCA National Board Members Zanku Armenian and Aida Dimejian participated in the meeting, along with ANCA Government Affairs Director Tereza Yerimyan and Programs Director Alex Galitsky.

“As this humanitarian crisis worsens by the day, the ANCA along with its network of grassroots activists across the country remains committed to engaging with Congressional representatives to demand the Biden Administration take urgent action to end Azerbaijan’s blockade,” remarked ANCA National Board Member Zanku Armenian.

“Congresswoman Porter has been a powerful voice for her Armenian constituents throughout her time in office,” remarked National Board Member Aida Dimejian. “As a champion for human rights with a track record of ensuring oversight and accountability in U.S. foreign policy – Rep. Porter is a natural ally in our community’s efforts to end Washington’s emboldenment of Azerbaijan’s authoritarian regime.”

The meeting also included a briefing by Gev Iskajyan, who moved to Artsakh from California to serve as executive director of ANC-Artsakh.  Iskajyan explained that this blockade is nothing short of an attempt to ethnically cleanse Artsakh’s indigenous Armenian population, and reiterated the need for immediate action to prevent a humanitarian catastrophe. “Azerbaijan is not phased by words of condemnation – it’s time the U.S. imposed material costs on Azerbaijan for its unabated aggression against the Armenian people,” remarked Iskajyan. “We look forward to working with Congresswoman Porter to pursue accountability measures that make clear to Azerbaijan its attempts to impose its will on the people of Artsakh through coercion and intimidation will not be accepted.”

Rep. Katie Porter was first elected to the U.S. Congress in 2018, representing south-central Orange County – including Anaheim, Irvine, Tustin, and Laguna Niguel. Congresswoman Porter is an active member of the Congressional Armenian Caucus and has supported a range of legislative initiatives to hold Azerbaijan accountable for its human rights abuses, war crimes, and ongoing detention of Armenian prisoners of war. She recently announced her decision to run for California’s U.S. Senate seat in 2024, currently held by Senator Dianne Feinstein.

“In these trying times for our community and nation, we are grateful for Congresswoman Porter’s unwavering support for the Armenian-American community,” remarked ANCA Orange County Chair Violet Bulujian-Franklin. “We look forward to continuing to work with Rep. Porter to pursue the enforcement of Section 907 restrictions on military assistance to Azerbaijan, and to facilitate emergency humanitarian relief to Artsakh’s besieged population.”

Since the first day of the blockade, the ANCA has been working with the White House, State Department, and Congressional leaders – urging them to stop U.S. military assistance to Azerbaijan and to send emergency humanitarian assistance to Artsakh. Thousands have already used the ANCA online portal – anca.org/blockade – to call, tweet, and write the White House and Congressional leaders to immediately address this enfolding Artsakh humanitarian crisis.