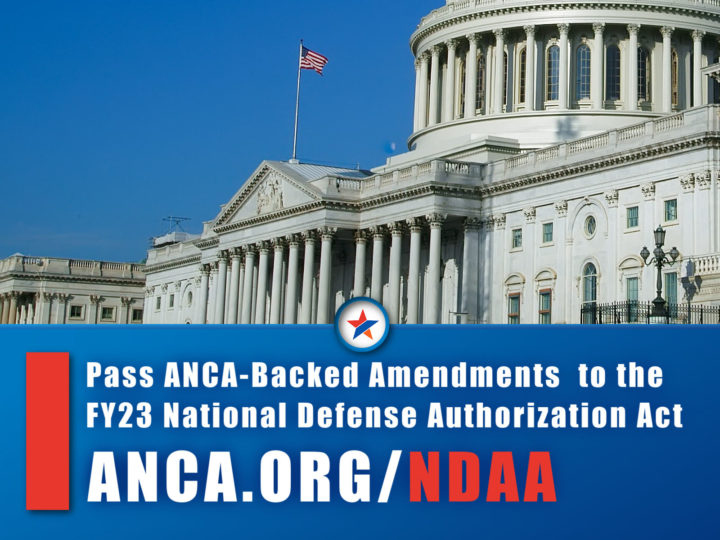 The Armenian National Committee of America (ANCA) is mobilizing on Capitol Hill and in Congressional districts across America to hold Azerbaijan and Turkey accountable for their ethnic cleansing of Artsakh and ongoing attacks on Armenia – backing a series of targeted amendments to the Fiscal Year (FY) 2023 National Defense Authorization Act (NDAA – H.R.7900) to cut military aid to Baku, stop F-16 sales to Ankara, and return Armenian POWs.

The ANCA is leading a nationwide grassroots effort – anca.org/ndaa – to secure cosponsors for each of the amendments, which are set to be considered by the House Rules Committee as early as Tuesday, July 12th. The full U.S. House will have the opportunity to vote on each of the amendments ruled in order, either separately or grouped together “en bloc,” during consideration of H.R.7900. Amendments with strong, bipartisan backing are generally considered more favorably by the Rules Committee.

“With President Biden recklessly approving yet another twelve months of military aid to the oil-rich Aliyev regime, it’s up to you to get Congress to stop our U.S. tax dollars from financing Azerbaijan’s ethnic-cleansing of Artsakh and aggression against Armenia,” said ANCA Executive Director Aram Hamparian. “Take action today at www.anca.org/NDAA.”

The seven pro-Artsakh/Armenia amendments to the NDAA Bill are the following:

Amendment #992: Introduced by Rep. Jackie Speier (D-CA), the amendment directs the Secretary of Defense, in coordination with the Secretary of State, to document details of the waiver requirements to Section 907 of the Freedom Support Act and report on whether security assistance to the government of Azerbaijan undermines efforts toward a peaceful settlement between Armenia and Azerbaijan. Current cosponsors of the amendment include Representatives Judy Chu (D-CA), Frank Pallone (D-NJ), Adam Schiff (D-CA), and Dina Titus (D-NV).

Amendment #837: Spearheaded by Representatives Tony Cardenas (D-CA) and Brad Sherman (D-CA), the amendment calls for a report by the State Department and Defense Department that would detail the use of U.S. parts in Turkish drones used by Azerbaijan against Armenia and Artsakh; Azerbaijan’s use of white phosphorous, cluster bombs and other prohibited munitions deployed against Artsakh; Turkey’s and Azerbaijan’s recruitment of foreign terrorist fighters during the 2020 Artsakh war. Current cosponsors of the amendment include Representatives Gus Bilirakis (R-FL), Judy Chu (D-CA), Andy Levin (D-MI), Zoe Lofgren (D-CA), Frank Pallone (D-NJ), Adam Schiff (D-CA), Dina Titus (D-NV), and David Valadao (R-CA).

The ANCA has prepared a series of briefing papers on the ANCA-backed NDAA amendments, available here: