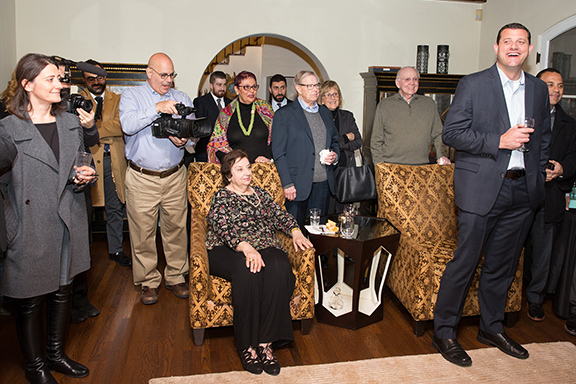 The gathering – chaired by Adour and Arsho Aghjayan – featured remarks by Dr. Alina Dorian regarding the life-transforming work of the Baroness Cox Rehabilitation Center in Stepanakert, Artsakh’s capital. Dr. Dorian serves as the Principal of the Rose and Alex Pilibos Armenian School and is Assistant Professor at the UCLA Department of Community Health Sciences. She is an internationally respected public health expert who authored Artsakh’s first National Health Plan in the mid-1990s and has extensive experience in the Republic.

“We are proud of Congressman Valadao’s principled leadership in support of the Republic of Artsakh,” said ANCA Chairman Raffi Hamparian, who was joined by his wife Dr. Mireille Hamparian in hosting the gathering. “The ANCA is doing all we can – during what promises to be a highly competitive election season – to ensure that Representative Valadao returns to Congress as a senior appropriator, ready to engage effectively with his House colleagues on issues of concern to his numerous Armenian American constituents.”

“The National Organization of Republican Armenians (NORA) has no higher electoral priority this cycle than helping to re-elect Congressman Valadao,” said NORA leader Aram Gaboudian. “David Valadao has always been there for our community, and we’re proud to stand with David, today and in the months and years to come.”

Dr. Dorian shared insights about the invaluable work of the Lady Cox Rehabilitation Center, first established in 2000 through a partnership of local health officials and then-Speaker of United Kingdom’s House of Lords, Baroness Caroline Cox (a trained nurse).

“It’s not just a Center,” said Dr. Dorian. “A center connotes walls and a building – a box. The Lady Cox Rehabilitation program thinks outside of the box – actually it’s created an environment where there is no box – serving the people in their homes and villages throughout Artsakh.”

The Baroness Cox Rehabilitation Center provides high-quality, specialized medical care each year to approximately 1,000 local and regional patients, and has treated over 15,000 to date. Among those receiving treatment – both at the Center and in their homes – are patients with spinal cord injuries, elderly stroke victims, and infants and children born with disabilities, such as cerebral palsy and spina bifida. The Lady Cox Center sends trained rehabilitation nurses to communities across Artsakh, serving those who do not have access to the Stepanakert location. The Center strives to dispel cultural stigmas, many rooted in the Soviet-era, associated with disabilities, and works – via speech, occupational and other therapies – to ensure that its patients are given the opportunity to live happy and fulfilling lives.

A brief video of the daily workings of the Lady Cox Rehabilitation Center is available at:

Hailing from California’s 21st Congressional District, which includes a large portion of the San Joaquin Valley, including towns around the City of Fresno, Congressman Valadao has consistently earned an “A” rating on the ANCA’s Congressional Report Card for his active representation of the Central Valley’s growing Armenian American community.

Congressman Valadao is a member of the influential House Appropriations Committee, where he successfully worked with the ANCA to ensure that U.S. aid continues to be used to de-mine the Republic of Artsakh – which was littered by lethal mines and unexploded Azerbaijani ordnance. Thanks to Congressman Valadao, last year the U.S. House of Representatives adopted a Federal Fiscal Year 2018 State-Foreign Operations Appropriations bill that fully supports continued U.S. support for demining work in Artsakh.

Thanks to the efforts of the ANCA and the leadership of Senator Patrick Leahy (D-VT), former Senator Mark Kirk (R-IL), Congressional Armenian Caucus Co-Chair Frank Pallone (D-NJ) and former Republican Co-Chair Joe Knollenberg (R-MI) – the U.S. has provided millions in funding to The HALO Trust, which has successfully demined approximately 97% of Artsakh. Over the last 16 years, the HALO Trust has destroyed over 8,733 anti-personnel mines, 2,584 anti-tank landmines, 180,858 small arms ammunition, 12,423 cluster bombs and 48,572 other explosive items. Amy Currin, who serves as HALO Trust’s Head of Development, provided an outstanding presentation to the Congressman and to those in attendance on the life-saving de-mining efforts of HALO’s front-line employees in Artsakh.

The ANCA’s efforts to secure direct U.S. assistance to Artsakh date back to May 1, 1997, when Congressman Brad Sherman (D-CA) offered an amendment, as a member of the House Foreign Affairs Committee, to the Foreign Policy Reform Act, to authorize direct U.S. funding for Artsakh. While the Sherman amendment failed, it set the stage for the ANCA’s work later that same year with then-senior appropriator Congressman Knollenberg , who successfully worked to ensure that the House Appropriations Committee approved a Foreign Aid bill (Public Law 105-118) that ultimately led to the allocation of $12 million in Federal Fiscal Year 1998 aid for Artsakh.

Congressman Valadao, who was born and raised in the small town of Hanford, California, was elected to the California State Assembly in 2010. Shortly thereafter, he sought and won the race to represent the constituents of California’s 21st Congressional District in the U.S. House of Representatives. Congressman Valadao’s family emigrated to the United States in 1969 from the Azores Islands in Portugal. Like his father, the Congressman runs a dairy farm in addition to managing over 1,000 acres of farmland in Kings and western Tulare County, on which Valadao and his family grow alfalfa, corn, and wheat as dairy feedstock.