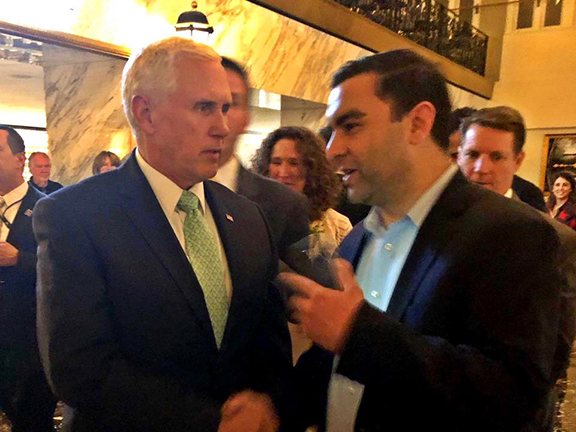 WASHINGTON—Armenian National Committee of America’s Government Affairs Director Raffi Karakashian called for honest American remembrance of the Armenian Genocide, during a one-on-one discussion with Vice President Mike Pence that also touched on the Trump-Pence Administration’s continuing efforts to protect and preserve Christian minorities and other at-risk populations across the Middle East.

Karakashian briefly spoke with the Vice President on March 14, per a post on the ANCA’s social media platforms.

ANCA-Indiana advocate Zohrab Tazian and the ANCA staff in Washington, DC have engaged with Vice President Pence since his first election to the U.S. House of Representatives in 2000. The ANCA, which, in 2005, welcomed his votes in the House Foreign Affairs Committee for the Armenian Genocide resolutions H.Con.Res.195 and H.Res.316, expressed sharp disappointment at his Committee votes against similar measures, H.Res.106 and H.Res.252 in 2007 and 2010, respectively. In both 2007 and 2010, during remarks before the Foreign Affairs Committee, he reaffirmed the historical fact of the Armenian Genocide, but explained that he would oppose the resolutions because he felt Turkey’s response would be harmful to U.S. interests.

In October of 2017, at an In Defense of Christians (IDC) dinner co-sponsored by the ANCA, Vice President Pence announced a new U.S. policy of directly providing U.S. humanitarian assistance to Christians and other persecuted communities across the Middle East. “We will no longer rely on the United Nations alone to assist persecuted Christians and minorities in the wake of genocide and the atrocities of terrorist groups,” announced Vice-President Pence. “The United States will work hand-in-hand from this day forward with faith-based groups and private organizations to help those who are persecuted for their faith. […] We stand with those who suffer for their faith because that’s what Americans have always done, because the common bond of our humanity demands a strong response.”

The ANCA – mindful of the challenges facing the Armenian community in Syria – joined with the Knights of Columbus and IDC and other organizations in welcoming this policy shift. “Direct U.S. assistance to the Middle East’s at-risk Christian and other vulnerable communities through faith-based and private organizations represents a common-sense solution to fill major aid-delivery gaps that have left vast refugee and IDP populations, including Armenians, without any meaningful international assistance,” stated Executive Director Aram Hamparian, following the October, 2017 announcement. “We look forward to working with USAID and Armenian Church and local community leaders to address this issue as quickly and efficiently as possible.”a