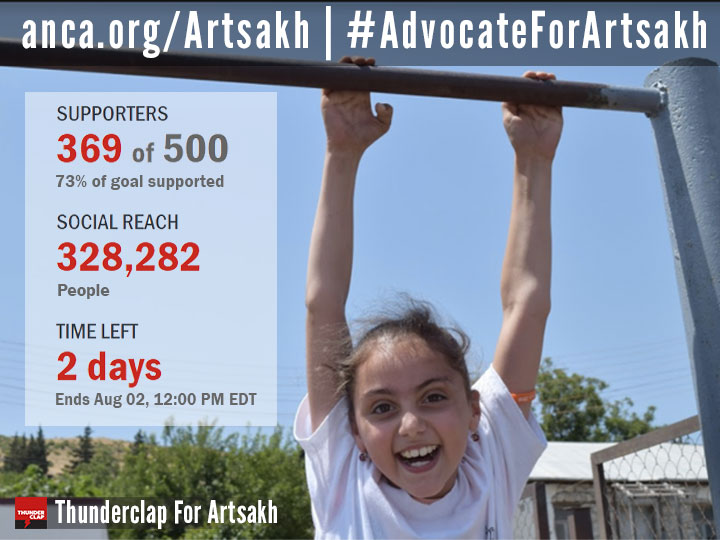 “We are so happy that hundreds of advocates have already signed on to better Artsakh’s future through this Thunderclap. With over 70% percent of our initial goal reached, we look forward to meeting and exceeding our initial target of a 500,000 social media reach by August 2nd,” said Marie Papazian, Taleen Simonian and Mari Tikoyan, members of the ANCA Leo Sarkisian Internship and Hovig Apo Saghdejian Capital Gateway Program summer team, which developed the effort.

A simple how-to video to register your support for the ANCA Thunderclap is available below:

Through the ANCA Thunderclap page – anca.org/Artsakh – users allow a one-time pro-Artsakh message on their Facebook, Twitter, and/or Tumblr accounts, scheduled to be posted on August 2nd at 12:00 noon EST. By sharing the pre-written post, each participant spreads the message to their unique group of friends and followers, with the aim of making the pro-Artsakh message go viral.

Then, on the day the campaign launches, Artsakh supporters will be guided to the ANCA’s “Quick Connect” page, directly connecting participants to their U.S. Senators, so that they can speak to a staff member or leave a message. All Quick Connect participants will have a one-time email sent on their behalf to their Senators and Representatives as well.

The three pillars of the campaign reflect the ANCA’s pro-Artsakh advocacy priorities:

1) Safety: Demining Artsakh allows its residents – especially kids – to live free from dangerous explosions. The HALO Trust has already de-mined over 97% of Artsakh with U.S. assistance and private support. The ANCA continues to press Senate and House leaders to help finish the project by including funding in the Fiscal Year 2018 foreign aid bill.

2) Security: Securing Artsakh’s borders is crucial in protecting its citizens and promoting a peaceful resolution that will help keep the region safe and free. House Foreign Affairs Committee Chairman Ed Royce (R-CA) and Ranking Democrat Eliot Engel (D-NY) have been joined by over 100 of their House colleagues in calling for the removal of snipers, expansion of monitors and the deployment of gun-locator systems. Armenia and the Republic of Nagorno Karabakh (Artsakh) have agreed to the provisions; Azerbaijan has not.

3) Rehabilitation: Providing desperately needed rehabilitation services, through U.S. funding for the Lady Cox Rehabilitation Center, will restore health and hope for those suffering with disabilities. The ANCA has called for a specific allocation of U.S. assistance to the center as part of the Fiscal Year 2018 foreign aid bill.

To learn more about the campaign watch the ANCA video:

The Thunderclap has been used by government agencies, including the White House, and a broad range of policy and rights organizations to bring awareness to a variety of social issues.

Hours Left to ‘Thunderclap’ for Artsakh!

(ARMENIAN WEEKLY) Just a few days ago, an Azerbaijani anti-tank landmine blew up a truck carrying Artsakh soldiers in the Martuni region. Thankfully, no serious injuries were reported, but there are no guarantees that the next landmine will not be deadly.

That is why taking a moment to #AdvocateForArtsakh, by adding your voice to the ANCA Thunderclap campaign, is so crucial. Simply visit anca.org/Artsakh.

With the Aug. 2 deadline only hours away, now is the time to take action! We have successfully surpassed our initial goal of 500 advocates, but there is still so much more to be done. By promoting and sharing our Thunderclap, you can help expand our social reach by hundreds of thousands.

At its core, this is a humanitarian effort. It is for children who cannot advocate for themselves, for at-risk residents who need medical care, and for those who fear losing their homes and families to Azerbaijani aggression. Through our efforts, we hope to secure freedom and security for all of those in Artsakh.

The Thunderclap launches Wednesday at noon EST, encouraging friends and family to use the Armenian National Committee of America’s (ANCA) “Quick Connect” page to be directly connected to their U.S. Senators so that they can share a pro-Artsakh message with Senate staff members or leave a message. All Quick Connect participants will also have a one-time email sent on their behalf to their Senators and Representatives as well.

#AdvocateForArtsakh has been a central focus of the ANCA Leo Sarkisian Internship and Hovig Apo Saghdejian Capital Gateway Program summer team. The team appreciates the opportunity to work with each individual advocate to leverage a united voice and social media reach to help Armenians in need.

Now, the baton is passed to you…

Join the ANCA in advocating for a better and brighter Artsakh: anca.org/Artsakh