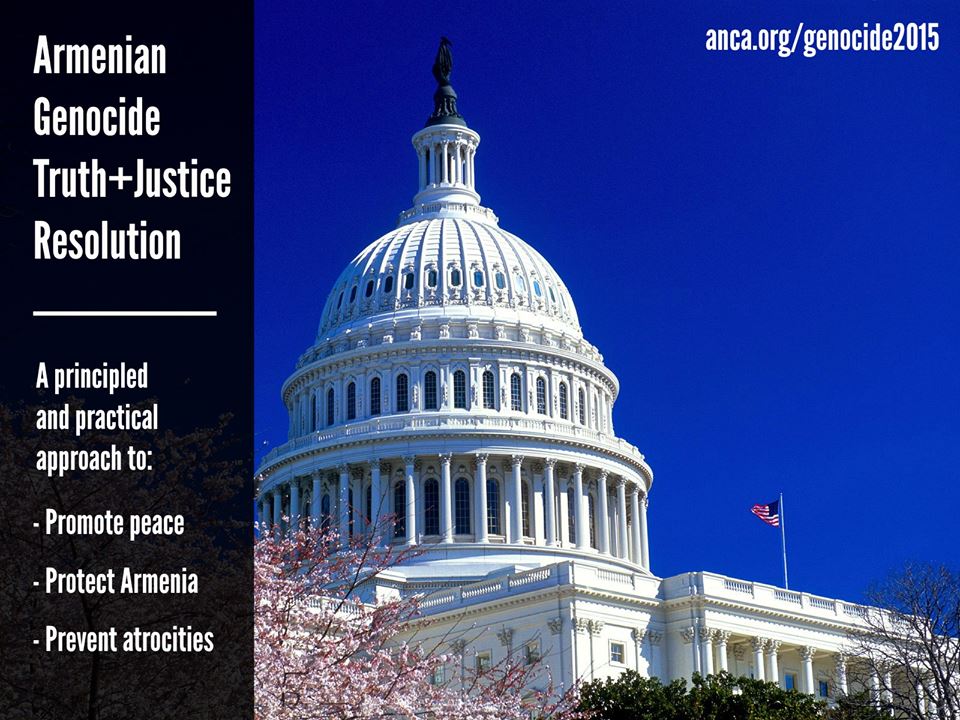 WASHINGTON, DC – A broad spectrum of veteran and freshmen House Members are adding their voices to the global call for truth and justice, as support for passage of the Armenian Genocide Resolution (H.Res.154) continues to grow, reported the Armenian National Committee of America (ANCA).

During a press conference held in conjunction with the introduction of H.Res. 154 last week, Representatives Anna Eshoo and Jackie Speier offered powerful personal calls for U.S. reaffirmation of the Armenian Genocide. “I am of both Armenian and Assyrian descent,” said Rep. Eshoo. “I know the stories. I lost family in the Genocide,” she explained, as she went on to share her concerns about the ongoing horrors in the Middle East visited on Christian communities today. “History does repeat itself. Today, we are seeing the elimination of Christians across the Middle East. And so, history is repeating itself. The Armenian Genocide took place because Armenians were Christians – they had a mark on them. The Christians in the Middle East today are suffering at the hands of yet others who seek to exterminate them.”

Rep. Jackie Speier explained, “I am a proud Armenian American. I am also a pained Armenian American because our Congress has not seen fit to do the very least that we can do in recognizing the Armenian Genocide. This is the 100th anniversary. Certainly after 100 years we can recognize a fact and pass a resolution condemning the act.”

Rep. Sherman: “Genocide denial is not just the last step of a genocide, it is the first step in the next genocide.”

“This is a genocide that Senator Barack Obama recognized, that Senator Kerry recognized, that UN Ambassador, Ms. Power, recognized and wrote the book on. And it’s time for both the Executive branch and legislative branch to do the same.” stated House Foreign Affairs Committee senior member Brad Sherman (D-CA). “We need to show the Government of Turkey that we cannot be cawed. That we cannot ignore history; because Genocide denial is not just the last step of a genocide, it is the first step in the next genocide.”

“I think it is important that the world community, that the United States, Turkey, acknowledge the atrocities that occurred – the genocide,” stated Michigan Freshman Republican David Trott. “I am new to this Congress. I have only been here a few months, but it is hard for me to fathom why we are still debating and discussing this topic. We need to move forward with this resolution. I am a proud sponsor of it.”

Southern California Congresswoman Judy Chu remembered her meetings with 104-year-old Armenian Genocide survivor Joseph Manjikian, who has since passed away, but remains a steadfast reminder of the horrors of the past and the need to speak truthfully about that crime. “With the Armenian genocide centennial quickly approaching, we must stand shoulder to shoulder with the Armenian American community and on the side of justice,” said Rep. Chu. “We will not give up until our country stands on the side of history.”

Fellow Ocean State Congressman James Langevin, noted “A century has passed since more than one million Armenians lost their lives in a senseless campaign of violence, and yet the Armenian people worldwide are still waiting for universal acknowledgement of the genocide committed against them. I am proud to support the Armenian Genocide Truth and Justice Resolution, and I will continue to back these efforts to honor the victims and give the Armenian community the support and peace of mind that they deserve.”

Central Valley, California Congressman Costa countered detractors who would argue the timing of the resolution. “Next month will be the 100th anniversary of the start of the Armenian genocide. Acknowledging this atrocity would finally allow a fair, just, and comprehensive international resolution of this crime against humanity. […] The time is now! Congress and the President should go on record acknowledging this atrocity once and for all.”

The Armenian Genocide Truth and Justice Act (H.Res.154), spearheaded by Congressional Armenian Caucus Co-Chair Robert Dold, Adam Schiff, David Valadao and Congressional Armenian Caucus Co-Chair Frank Pallone reflects and reinforces previous U.S. affirmation of the Armenian Genocide as a crime of genocide, citing the U.S. Government’s May 28, 1951 written statement to the International Court of Justice regarding the Convention on the Prevention and Punishment of the Crime of Genocide, President Ronald Reagan’s April 22, 1981 Proclamation and Congressional adoption of Armenian Genocide legislation in 1975 and 1984. The resolution calls on the President to work toward equitable, constructive, stable, and durable Armenian – Turkish relations based upon the Republic of Turkey’s full acknowledgment of the facts and ongoing consequences of the Armenian Genocide, and a fair, just, and comprehensive international resolution of this crime against humanity.