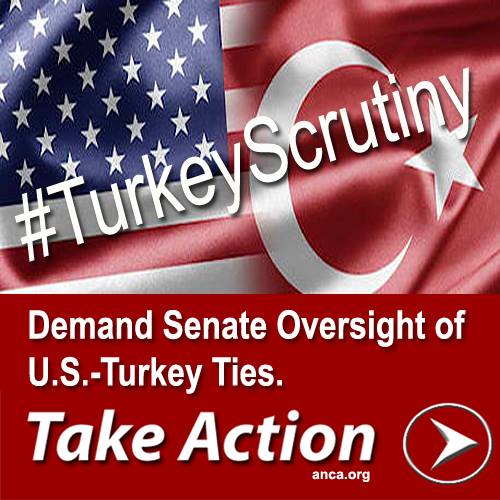 (ANCA) Ask for Close Senate Scrutiny of Next U.S. Ambassador to Turkey
President Obama’s Nominee will be America’s Envoy in Turkey on April 24, 2015

On Tuesday, July 15th, the Senate Foreign Relations Committee is set to begin consideration of President Obama’s nominee as the next U.S. Ambassador to Turkey, John R. Bass.

Please contact your U.S. Senators TODAY to ensure that Mr. Bass is given the opportunity to respond, under oath, to direct questions regarding Turkey’s denial of truth and obstruction of justice for the Armenian Genocide.

Send a free WebFax to your Senators today and encourage them to reach out to their Senate Foreign Relations Committee colleagues to attend the upcoming Ambassadorial confirmation hearing and ask questions concerning State Department policy on:

3) Turkey’s widely reported role in the March 21, 2014 extremist attack on the Armenian town of Kessab in Syria.

4) Turkey’s refusal to return thousands of stolen Christian church properties on the territory of Turkey and the portion of Cyprus occupied by the Turkish military.

Sending a free ANCA WebMail is easy. Just type in your ZIP code and follow the simple instructions. You’ll have the opportunity to customize your letter any way you like.