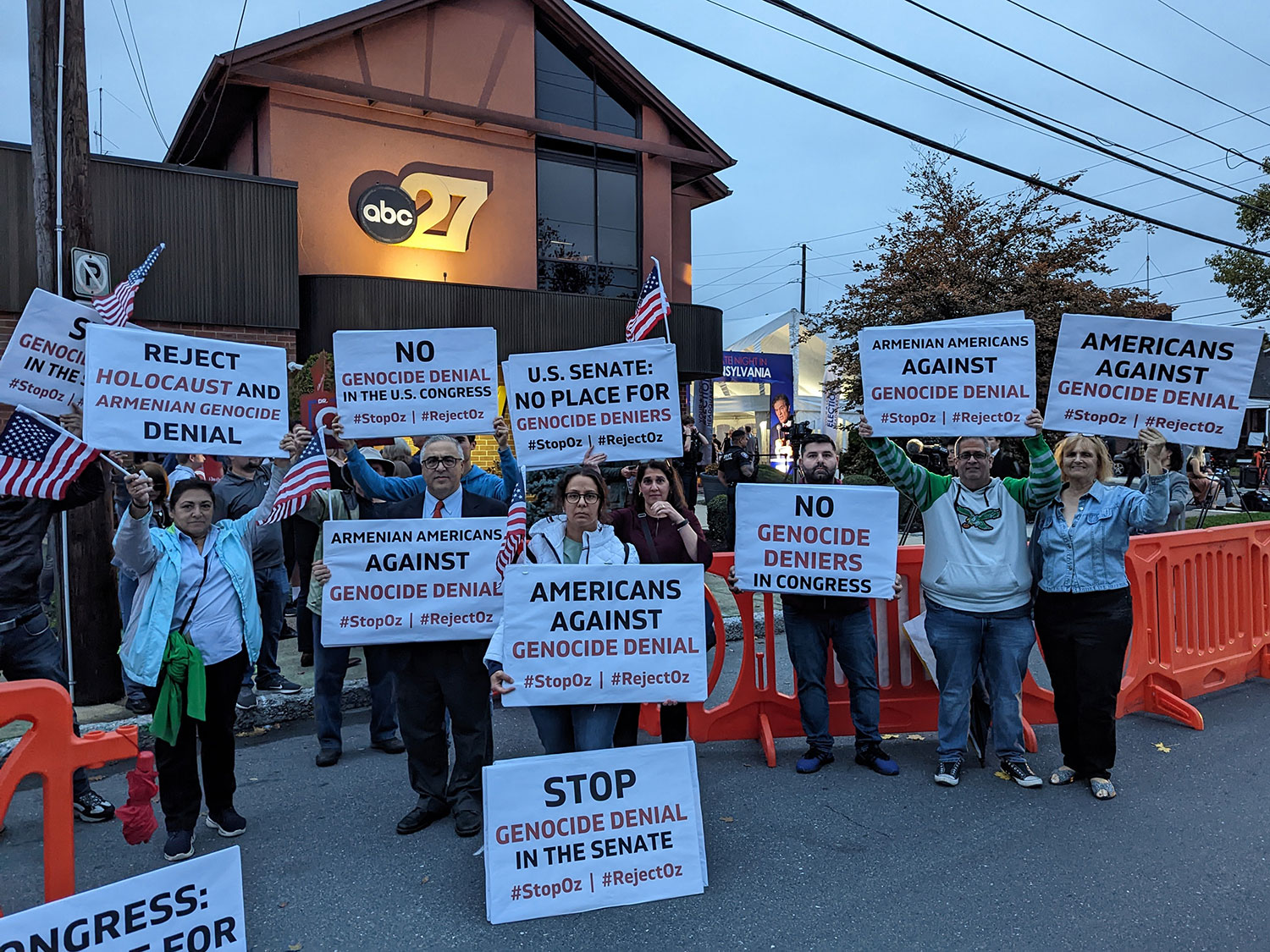 Armenian Americans again called on Pennsylvania Senate candidate Dr. Mehmet Oz to end his complicity in Turkey’s Armenian Genocide denial, at a protest organized by the ANC of Pennsylvania (ANC-PA), timed with the televised debate between Dr. Oz and his opponent, Pennsylvania Lieutenant Governor John Fetterman.

Protesters shared their concerns with local, national, and international media in the run-up to the debate, noting Dr. Oz’s refusal to properly characterize the Armenian Genocide, his close ties with Turkey’s dictator Recep Erdogan, and concerns that a Dr. Oz victory would open the door to foreign influence in the U.S. Senate.

ANCA Executive Director Aram Hamparian told the Philadelphia Inquirer’s Julia Terruso that “we’re worried that the unanimity that took us 50-60 years to secure will be rolled back.”  Hamparian was referencing the 2019 unanimous U.S. Senate vote recognizing the Armenian Genocide.  The ANC-PA protest was also covered by MSNBC and the local York Dispatch, in addition to British, Japanese, and Korean television.

The protest in Harrisburg was the ANC-PA’s latest effort to call attention to Dr. Oz’s Genocide denial. Just a week earlier, a coalition of Armenian, Jewish, Greek, and Kurdish Americans, shared their concerns in a live-streamed demonstration at Dr. Oz’s headquarters in Huntingdon Valley, PA – organized by the ANCA national, Eastern US regional, and Pennsylvania local affiliates, Rabbi Shmuley Boteach – “America’s Rabbi,” – who leads the World Values Network, and the Hellenic American Leadership Council (HALC).

Earlier in October, a protest organized by Armenian and Jewish Americans, led by Rabbi Shmuley, forced the cancellation of a high-dollar fundraiser for Dr. Oz in Englewood, NJ.  Another protest, organized by the Armenian Youth Federation Western U.S. (AYF-WUS), took place on October 6th at the Lyon Air Museum in Santa Ana, where the AYF called on “the Dr. Oz for U.S. Senate Campaign to right its wrong, by fully and transparently recognizing the Armenian Genocide, and standing with the U.S. government in holding Turkey accountable for its atrocious crime.”

The ANCA has endorsed Dr. Oz’s opponent, Pennsylvania Lieutenant Governor John Fetterman, who issued a series of statements outlining his support for Armenian Genocide affirmation and education as well as a broad range of Armenian and Greek American concerns.  Lt. Governor Fetterman stated:

— “I also support the NDAA Amendment adopted in the House (Pappas Amendment) and introduced in the Senate (Menendez Amendment).  With regard to Greece & Cyprus, Sen. Menendez’s two pieces of landmark legislation that have passed into law – the Eastern Mediterranean Security and Energy Partnership Act of 2019 and the US-Greece Defense and Interparliamentary Partnership Act of 2022 – promote U.S. interests and values. I support the continued and full implementation of Senator Menendez’s legislation.”