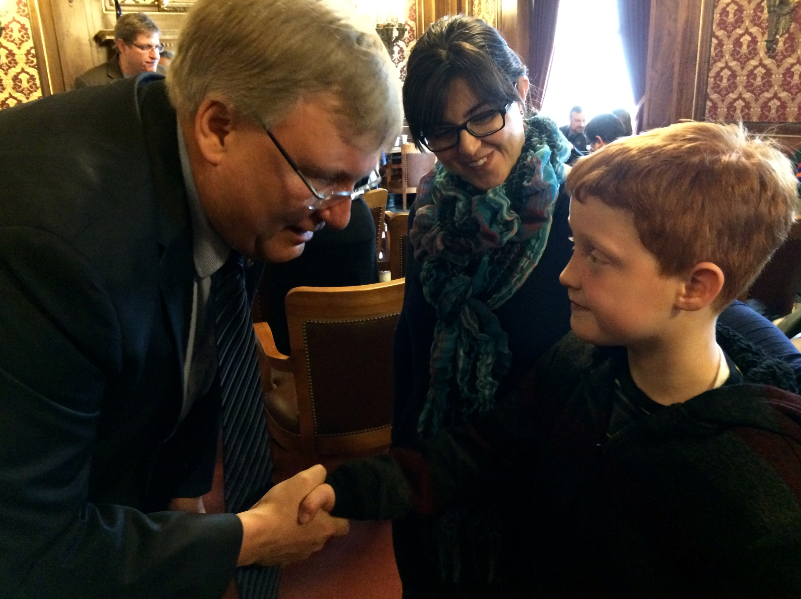 MADISON, Wis.—The Armenian National Committee (ANC) of Wisconsin paid tribute to the more than 1.5 million lives lost in the Armenian Genocide with a reception and program at the Wisconsin State Capitol in Madison on Wed., April 22.

The purpose of the event, which has been held for 15 years, is to thank the Wisconsin State Assembly and State Senate for adopting Armenian Genocide resolutions. Assembly Resolution 42, which was passed in 2000, and Senate Resolution 14, passed in 2002, designate April 24 of each year as the “Wisconsin Day of Remembrance for the Armenian Genocide of 1915 to 1923,” and pledge to continue to educate and promote awareness of Armenia and Armenian issues.

This year, the reception was particularly important, as the day before the Wisconsin State Senate passed Assembly Joint Resolution (AJR) 23. This new joint resolution designates April 24, 2015, as a Day of Remembrance for the 100th anniversary of the Armenian Genocide.

AJR 23 was a bipartisan effort, introduced by Representatives Weatherston, Barca, Bernier, Brandtjen, Goyke, Jacque, Kerkman, Kitchens, Mason, Murtha, Ohnstad, Petryk, Riemer, Ripp, Rodriguez, Schraa, Shankland, Skowronski, Spreitzer, C. Taylor, Tittl, and Zepnick, and Senators Wanggaard, Hansen, Harris Dodd, C. Larson, Lazich, Marklein, L. Taylor, and Wirch. Although this was purely a commemorative resolution, there was a strong effort from the Turkish Consulate in Chicago to pull the resolution. The consulate sent letters and made phone calls to the Wisconsin Assembly and Senate, but failed to prevent the Assembly from adopting the joint resolution on April 14. The consulate escalated its efforts by sending lobbyists to the Wisconsin Senate just days before their planned vote. Fortunately, through the efforts of constituents and ANC activists, the state senators received many phone calls on April 20 encouraging them to focus on the facts, reafﬁrm what they have been designating in other resolutions for years, and reject the Turkish pressure. On April 21, AJR 23 was added back to the agenda and passed with a unanimous voice vote.

In her remarks, ANC-WI chairperson Dr. Ani Saryan stressed that on the Centennial of our greatest tragedy we must take a moral stand for justice. “We must carry the tragedy of the genocide in our hearts and honor our dead, but cannot be bound by it. We must strive for peace, justice, and progress. By demanding a truthful and just resolution of the Armenian Genocide, we are saying ‘Never Again’ to all genocides,” Saryan said.

Saryan further noted that “to create a better tomorrow, we must choose the difficult path—not the path of hatred and wrath, because that is too easy, but the path of peace and, someday, forgiveness.” She invited the co-hosts of the event to share their experiences and thoughts. Rep. Barca, a longtime supporter of early resolutions and co-host of the event this year, noted that “unless you commemorate the past you’re condemned to repeat it.” Rep. Katrina Shankland said that with regards to commemorating the Armenian Genocide, “The time is always right to do what is right.” Event co-hosts, Representatives Mason and Ohnstad and Senators Hansen, Lazich, and Wanggaard, also made remarks.

Representatives, senators, staff members, and attendees from throughout the state of Wisconsin enjoyed a lavish buffet of Armenian mezze and desserts.