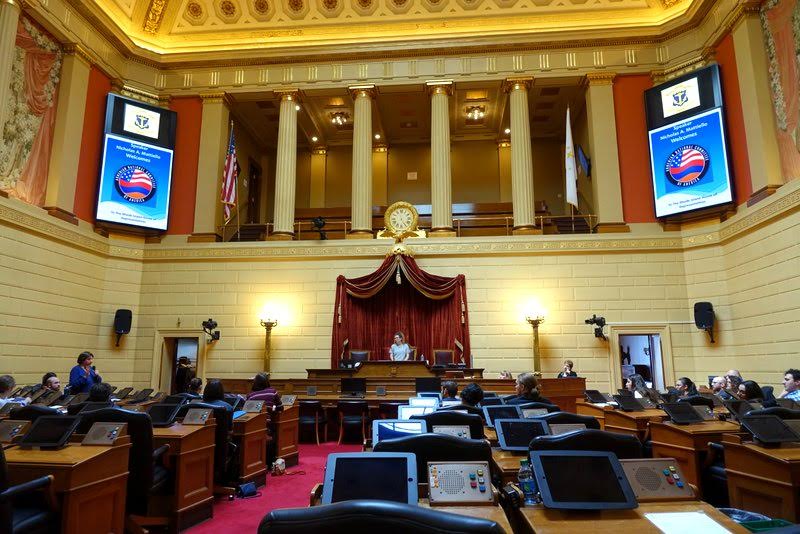 (ARMENIAN WEEKLY, May 23) PROVIDENCE, RI.— On May 13, the Armenian National Committee of Rhode Island (ANC-R.I.) held an instructional workshop for its current and prospective members. Participants from Rhode Island were joined by members of the Boston and Hartford ANC chapters, as well as members of the Armenian Youth Federation (AYF) Central Hai Tahd Council. In all, 22 participants were present for two sessions.

Mock Session of the R.I. House of Representatives

The morning session, which began at 10 a.m. in the House Chambers of the Rhode Island State House, had an external focus. The session was created to enhance members’ communication skills and to provide guidelines of the “dos and don’ts” when lobbying for legislation.

Throughout the session, each participant was designated as a State Representative and seated at a desk in the chambers. Each desk provided access to the Chamber’s microphone and sound system, as well as the electronic voting board.

Mayor Scott Avedisian of Warwick, R.I., who graciously attended the session while traveling between two college graduation ceremonies, led the gathering in reciting the Pledge of Allegiance and offered his remarks and best wishes. For purposes of the workshop, serving as Speaker of the House was State Rep. Katherine Kazarian (District 63), and serving as Majority Leader was State Rep. Aaron Regunberg (Dist 4). ANC-R.I. member Pauline Getzoyan served as the House Clerk.

During the mock session, the “Representatives” were asked to debate two bills. The “representatives” were not allowed to choose whether they would speak for or against each bill, rather they were told which side of the debate they had to support. The topic of the first bill focused on recognition of the Armenian Genocide, while the second bill addressed recognition of Artsakh’s Independence.

Following lunch, the workshop continued at the community center with Session two focusing on widening the ANC’s reach and increasing its footprint in communities. The participants formed three groups and were asked to discuss the following topics: effective lobbying, coalition building in the non-Armenian Community, press and public relations, and community outreach within the Armenian community. The groups reconvened at the end of the day to present their thoughts and provide suggestions related to each topic.

The ANC-R.I. thanks R.I. Speaker of the House Nick Matiello, George Varky Kaprielian (photographer), Mayor Avedisian, Rep. Kazarian, Rep. Regunberg, and the ANC Eastern Region staff for their roles in supporting this successful and productive workshop.