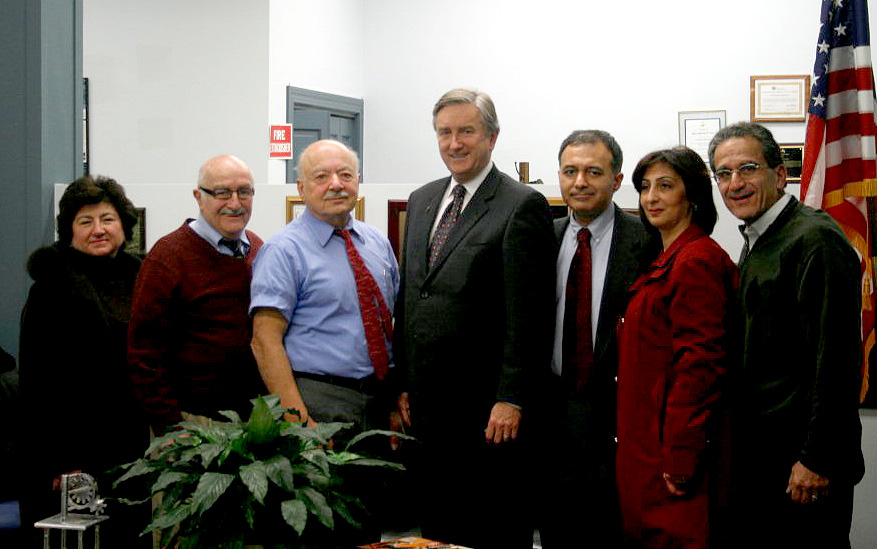 PEABODY, Mass.—Activists of the ANC-Merrimack Valley of Massachusetts had a successful meeting with Congressman John Tierney of the sixth district of the commonwealth on Monday, Dec. 16 in his district office in Peabody.

Activists Tom Vartabedian and Joe Dagdigian, as well as constituents Saro Khachikian, Ani Babaian, and Anahid Mardiros, brought forth a number of local and national issues concerning Armenian-Americans, which included the Armenian Genocide resolution, U.S. aid to Armenia, and the dire situation in Syria.

“I was pleased to meet with members of the Armenian National Committee this week to discuss the ongoing challenges that the Armenian community is experiencing. As a member of both the Congressional Armenian Caucus and the Congressional Human Rights Caucus, I remain committed to urging U.S. support for Armenia and its people and appreciate the ANC’s commitment to the same,” said Congressman John Tierney.

“Congressman Tierney has been a longtime supporter of our cause and our meeting confirmed his continued dedication and work for the betterment of Armenia and its people,” noted Ara Jeknavorian, ANC of Merrimack Valley co-chairman. “We appreciate his work as a member of the Congressional Armenian Caucus and we look forward to working with him in the near future on a number of issues.”

In addition to thanking Rep. Tierney for co-sponsoring House Resolution 227, the Armenian Genocide Truth and Justice Resolution, the group discussed the current status of Nagorno-Karabakh. “We alerted the Congressman about the continued Azerbaijani military buildup and threats to use force to resolve the status of Nargorno-Karabagh,” said Jeknavorian. “Rep. Tierney has visited the region in the past, so it was important for us that he is aware of the ongoing struggles that our brothers and sisters continue to face.”

The group also spoke about the upcoming initiatives and activities in the district including the implementation of genocide education classes at Peabody High School. “It is critical that we make every effort to teach our future generations about human rights issues and crimes against humanity, especially the history of our people,” said long-time activist Tom Vartabedian. “We are approaching the eve of the 100th anniversary of our genocide, and as part of our awareness activities, genocide education should be at the forefront.”

In preparation of the 100th anniversary of the genocide, the ANC of Merrimack Valley is working to display an exhibit commemorating the genocide at a world-renown museum or local university. “Congressman Tierney has indicated his strong support for the commemoration of the 100th anniversary of the genocide, both in Washington and locally, as well as his active participation with the Armenian caucus,” explained Jeknavorian. “We look forward to working closely with Rep. Tierney as well as Rep. Nikki Tsongas of the third district on these projects.”

Rep. Tierney has been serving the northern shores of Massachusetts, home to a large Armenian population, since 1997. Growing up in Salem, Mass., he created strong ties with the Armenian people at a young age and continued to educate himself about Armenian history from Armenian friends. Congressman Tierney continues to lend his support and attendance to the annual Armenian Genocide commemoration ceremony in Peabody, which was established by former mayor Peter Torigian.