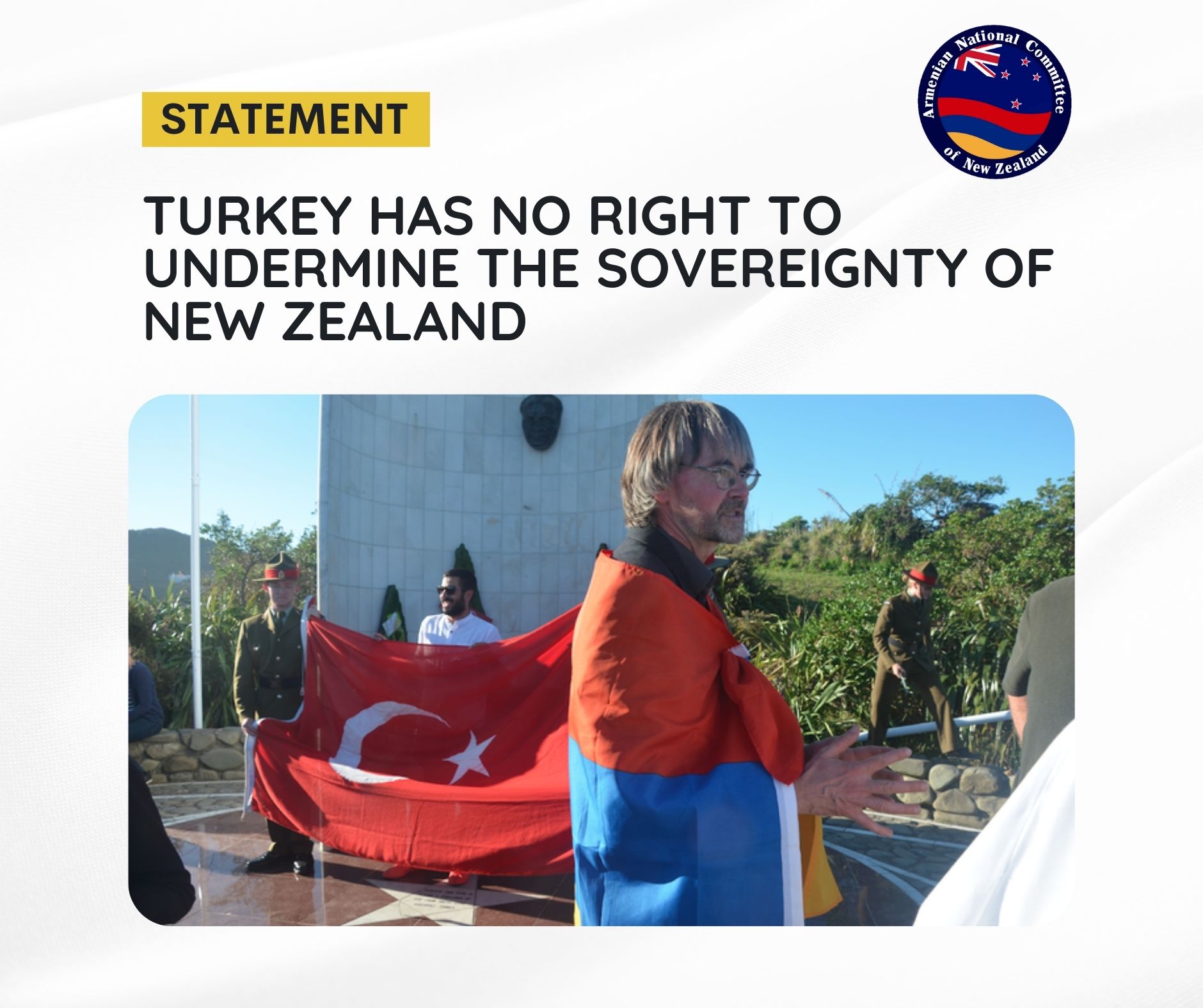 ANC-NZ statement: Turkey has no right to undermine the sovereignty of New Zealand 

The Armenian National Committee of New Zealand (ANC-NZ) condemns, in the strongest terms, any and all attempts by the authoritarian regime of Turkey and its foreign agents to restrict the freedoms and rights of New Zealand citizens in their homeland.

On 25th April 2022, Wellington Police prevented Mr. Richard Noble from silently protesting against the New Zealand Government’s lack of formal recognition of the extermination of over 1.5 million Armenians during the Armenian Genocide at the Ataturk Memorial on Wellington’s South Coast.

According to Mr. Noble, despite having conducted similar protests without incident for the past few years, Wellington Police on this occasion stated that they had been authorised by the Wellington City Council to trespass anyone with an Armenian flag on the request of the New Zealand Ministry of Foreign Affairs & Trade and the Turkish Embassy.

These actions are shameful and trample on the inalienable rights bestowed upon every citizen under the country’s Bill of Rights, which allows New Zealand to thrive as a Western democratic nation built upon the liberal values of truth, justice and freedom of expression.

We stand with Mr. Noble, a Wellington resident and citizen of New Zealand, whose constitutional right to freedom of speech was infringed upon due to the request of foreign dictatorship who similarly oppresses and restricts freedom of expression and speech within its own borders.

New Zealand is not Turkey, and it must be made known to Prime Minister Jacinda Arden, Foreign Minister Nanaia Mahuta and the Wellington City Council that there is no appetite for kowtowing to an authoritarian regime’s ongoing denialism of the Armenian Genocide and attempts to whitewash historical events that are internationally recognised as Genocide.

By allowing such incidents to take place, New Zealand authorities are continuing the denial of our nation’s history and the unique relationship that exists between ANZACs and survivors of the Armenian Genocide, as illustrated by author and historian James Robins, who documents Australia’s and New Zealand’s participation in the enormous post-war Armenian relief movement for the survivors of the genocide.

Given our reputation for upholding values of universal human rights, we must stand against and collectively denounce any attempts by foreign agents who seek to interfere, invade and undermine the sovereignty of New Zealand and its citizens.

We strongly welcome the support of New Zealand based human rights activists and lawyers, Douglas Ewen and Michael Bott, who have echoed these sentiments and denounced the disgraceful actions of Wellington based authorities as inappropriate.

Whilst Wellington City Council has denied preventing peaceful protests against Turkey, the ANC-NZ and broader Armenian-New Zealand community, call on Wellington Council to immediately investigate this matter appropriately and hold to account the foreign agencies and individuals responsible for suppressing Mr. Noble’s rights and freedoms.

Lastly, it is now well overdue for Prime Minister Arden and the New Zealand Government to take a firm and principled stand in making it clear to the authoritarian regime in Turkey that it will no longer countenance, or be a party to, the shameful use of the sacred graves of the ANZACs in Gallipoli as “hostages” in its long discredited attempted denial of the internationally recognised Armenian Genocide.