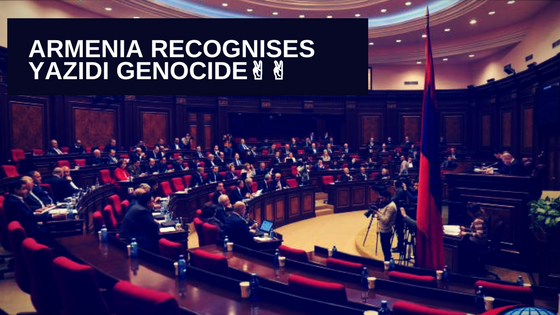 SYDNEY: The Armenian National Committee of Australia (ANC-AU) has welcomed the recognition of the Yezidi Genocide by the Parliament of the Republic of Armenia.

ANC-AU has written to Yazda Australia, congratulating the Yazidi-Australian community on this “historic recognition”.

“We thank the Armenian Parliament and the international Yazidi community on this historic recognition,” ANC-AU Executive Director, Haig Kayserian said.

“As a victim race of genocide ourselves, it is important all Armenians call out and condemn injustices suffered by fellow peoples, always. This step by the Parliament of the Republic of Armenia brings pride to Armenians around the world.”

Yazidi Genocide survivor and the UNODC Goodwill Ambassador for the dignity of Survivors of Human Trafficking, Nadia Murad said: “I am touched by today’s decision and I would like to express my gratitude to the people of Armenia and their representatives in Parliament. Acknowledgement of the Genocide means a lot to me and all the victims of genocide.”

Murad Ismael, the Yazda Executive Director, said: “The Yazidi genocide is the latest capital crime of our century, the world should recognise this crime and accept the fact it happened, not only recognise it but take the steps to stop it and adopt mechanisms to ensure it will not be repeated in the future.”

Yazda and Nadia Murad also extended their gratitude to the Republic of Armenia’s Standing Committee on Foreign Relations, to MP Rustam Makhmudyan (a Yazidi himself), leader of the RPA faction Vahram Baghdasaryan, leader of the ARF faction Armen Rustamyan, as well as the Tsarukyan and Yelk factions.