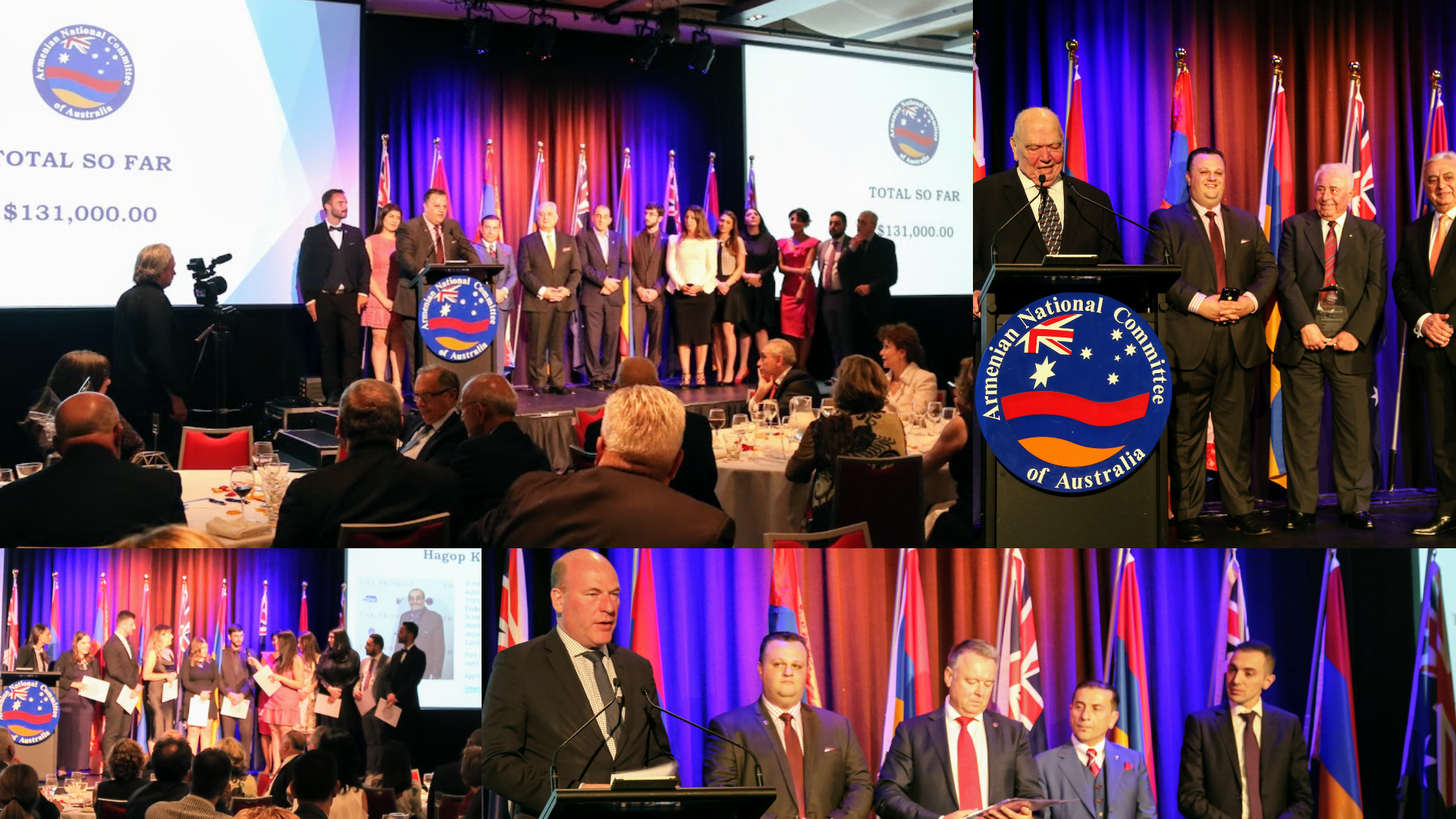 SYDNEY: The Armenian National Committee of Australia’s (ANC-AU) Annual Banquet raised a record $131,000 to advance advocacy of Armenian issues in Australian public affairs, as Professor Richard Hovannisian was honoured with the ANC-AU Freedom Award, while the Chair and Vice Chair of the Australia-Armenia Inter-Parliamentary Union, Trent Zimmerman MP and Joel Fitzgibbon MP received the Armenian Community’s Friend of the Year Award.

The event held The Concourse Civic Pavilion was presided over by Master of Ceremonies and legendary Armenian-Australian newsman, George Donikian. The guest list was headed by Professor Hovannisian from California, Members of Australia’s Federal Parliament, Members of the NSW State Parliament, Local Councillors, Media, Representatives of the Aboriginal, Jewish, Arab, Chinese, Assyrian, Indian and Greek communities, as well as Armenian clergy and community leaders.

Following a traditional Welcome to Country, delivered by Craig Madden of the Metropolitan Local Aboriginal Land Council, a video was introduced by ANC-AU Admin Assistant Michael Kolokossian, highlighting the success of this year’s ANC-AU Advocacy Week due to the launch of the inaugural Young Advocates Program.

ANC-AU Executive Director, Haig Kayserian then delivered his address to the audience, focusing on the collective role played by the grassroots in advancing issues of importance to Armenian-Australians.

“You are all part of the Armenian WE, along with the families and the membership you each represent. A WE united in our fight for truth and justice on the Armenian Genocide and the Republic of Artsakh, a sustainable Armenia and a thriving Armenian-Australian community. This all comes together at this event, because our work, the work of the Armenian National Committee, is the culmination of the Armenian WE.”

Kayserian added: “It was Isaac Newton, who once said: ‘If I have seen further, it is by standing on the shoulders of giants’. Ladies and gentlemen, standing on your shoulders, we feel like giants.”

The evening continued with the first honourees rising to the stage, in Federal MPs Trent Zimmerman and Joel Fitzgibbon.

The Chair and Vice-Chair of the Australia-Armenia Inter Parliamentary Union were instrumental in achieving the most significant advancement in Armenian Genocide recognition in Australia, which was featured in a video titled “House of Representatives: Breaking the Sound of Silence”. It details the Motion co-sponsored by the Member for North Sydney and the Member for Hunter, which was unanimously debated in favour of by Australia’s Lower House.

Both Zimmerman and Fitzgibbon were tremendously humbled after being named the Armenian Community’s Friends of the Year.

The audience watched a documentary on the lifetime achievements, in the field of Armenian Studies, after giving a standing ovation to Professor Richard Hovannisian; the recipient of the prestigious ANC-AU Freedom Award. The award reads: “In recognition for educating generations on Armenia’s modern history, including the Armenian Genocide and the Armenia’s First Republic, over many decades in Australia and beyond”, and was handed to him by ANC-AU Honorary Chair, Greg Soghomonian and former ANC-AU Chair, Vasgen Pailagian.

A running theme for the evening was the tremendous success of the first ever ANC-AU Youth Advocates Program, which had taken place earlier during this Advocacy Week. The majority of the young Armenians who participated in the Canberra program – practicing lobbying and debating in Australia’s Federal Parliament with Australia’s political leaders – were in attendance to receive their Participation Certificates from brothers, Dr. Tro Kortian, Dr. Vik Kortian and Mr. Khajaque Kortian. The Kortian family sponsored the Youth Advocates Program with the ANC-AU Internship Program’s Hagop Kortian Scholarship – in honour of their father; a founding force of the ANC-AU in Australia.

ANC-AU’s Olivia Dilanchian and Garineh Torossian interviewed some of the participants, including the visiting Chairs of ANC-AU Perth and ANC-AU Canberra, as well as the Chair of the Armenian National Committee of New Zealand (ANC-NZ).

One of the highlights of the night was a video covering ANC-AU’s shenanigans throughout 2018, titled “Riding Shotgun with ANC-AU”.

Bishop Haigazoun Najarian of the Armenian Apostolic Church, Reverend Hagop Sarkissian, NSW Armenia-Australia Parliamentary Friendship Group Chair and Vice Chair, Jonathan O’Dea MP and Walt Secord MLC were among the speakers who endorsed the activities of ANC-AU over the past 12 months.

Up and coming Armenian-Australian crooner, Johnny O’Han (Ohanes Ohanesian) helped entertain the audience with a set that included a tribute to the late French-Armenian maestro, Charles Aznavour. Donikian auctioned items that included an Aznavour-signed LP Record, a System of a Down-signed guitar which was introduced by band frontman Serj Tankian in a special video message, Parliamentary Wine signed by Premier Gladys Berejiklian who also had a video message for the audience, a Commemorated Rug made in the Republic of Artsakh, the four-volume Republic of Armenia books signed by Professor Richard Hovannisian, and sporting items including a signed Pele jersey and signed Cristiano Ronaldo boot.

The auction helped contribute to a record $131,000 being raised by Armenian-Australians in support of the advancement of Hai Tad in Australia.