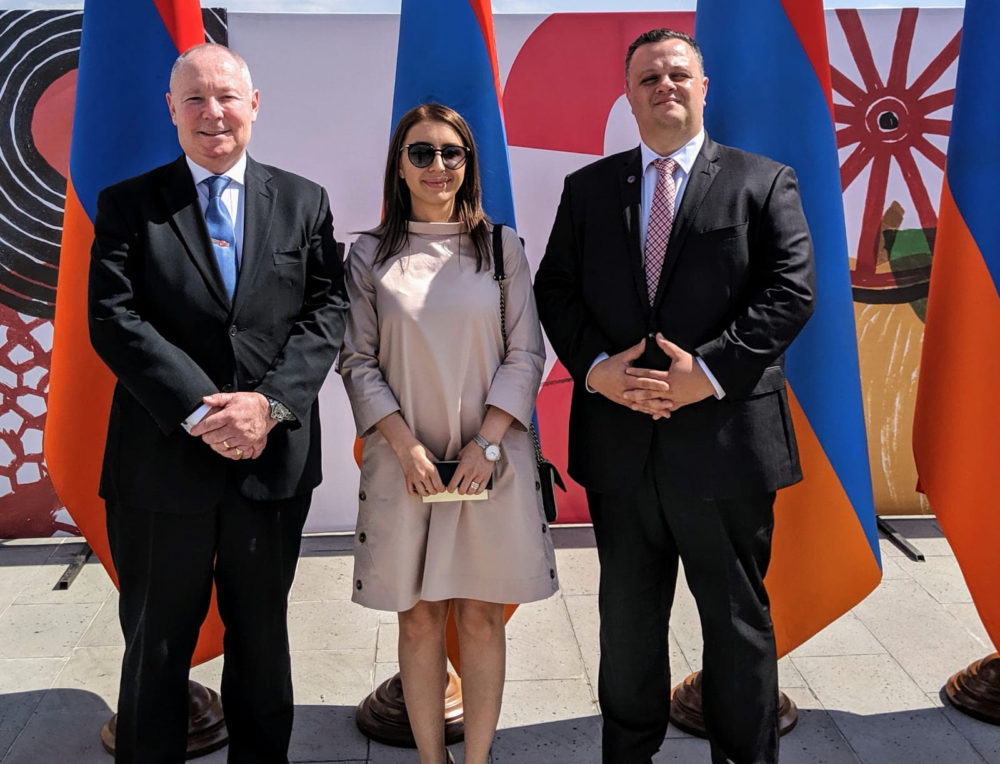 GYUMRI: Member of Parliament of Australia’s largest state of New South Wales, Dr. Hugh McDermott MP held a meeting with the Deputy Minister for Justice of the Republic of Armenia, Ms Kristinne Grigoryan, as the Armenian National Committee of Australia’s (ANC-AU) Australian Delegation to Armenia continued in the city of Gyumri.

Dr. McDermott is part of the NSW Parliament’s Committee on the Ombudsman, the Law Enforcement Conduct Commission and the Crime Commission, and had a distinguished pre-parliamentary career in law.

The current Member for the Western Sydney electorate of Prospect, Mr. McDermott completed his PhD in Law at King’s College, London in 2008, and has since worked in the United Kingdom in the area of labour rights, as a Commissioner of the International Commission for Labour Rights in Geneva, before his appointment as a commercial litigator with a law firm in the Cayman Islands specialising in financial crime, anti-money laundering and anti-corruption practices.

Prior to his entry into politics, he worked as NSW Senior Manager – Major Fraud and International Enforcement, with the Australian Securities and Investment Commission – an independent Australian government body that acts as Australia’s corporate regulator.

During their meeting, Armenia’s Deputy Minister for Justice Ms Grigoryan presented the judicial reforms process that was currently underway in Armenia, and the two exchanged ideas and experiences on fighting corruption.

During their fruitful one-hour discussion, Dr. McDermott offered his support and expertise as Armenia continued its transition towards the exemplary democracy of the Caucasus. Ms. Grigoryan declared her appreciation for the meeting and the offer for continued dialogue.

ANC-AU Executive Director Haig Kayserian said: “This meeting between Mr. McDermott and Ms Grigoryan was the kind of fruitful exchange we were hoping for between our Australian delegates and their Armenian counterparts.”

“They shared knowledge, experiences, and ideas while beginning a dialogue that could bring real benefits for both Australia and Armenia.”

Dr. McDermott, who is one of the inaugural signatories of the Australian Friends of Artsakh network, is part of the first Federal-led Australian Delegation to Armenia, organised by the Armenian National Committee of Australia.