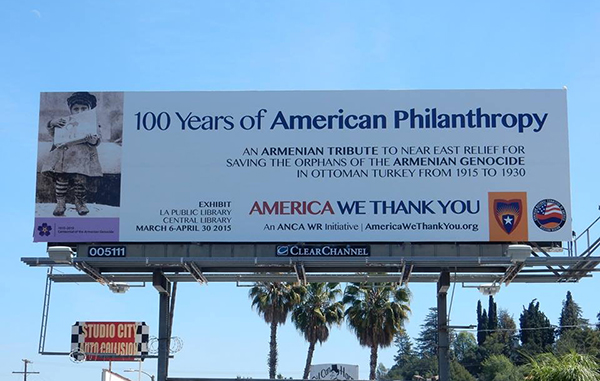 ‘America We Thank You’ Billboards Erected Across LA

LOS ANGELES—As Armenians gear up to commemorate the Armenian Genocide Centennial on April 24, residents all throughout Los Angeles, Armenian and non-Armenian alike, will be made aware of the unspeakable pain endured by their ancestors nearly 100 years ago.

During the last week of March, 21 billboards were erected in various cities throughout the County of Los Angeles paying tribute to the Near East Relief (NER), America’s very first non-governmental organization that was established in 1915 as a direct result of the Armenian Genocide. The NER became the ray of hope for a Nation that was buried in ashes and which was enduring deportation and genocide at the hands of the Ottoman Empire. The NER was an American-led relief campaign that helped save more than 132,000 orphans in the Near East during and in the aftermath of the Armenian Genocide.

In line with the various tribute activities that have been organized by the Armenian National Committee of America – Western Region’s (ANCA-WR) “America We Thank You” committee in the last year, the committee had been working for months with the Los Angeles Advertising Coalition to erect billboards throughout Los Angeles to raise awareness about NER’s pivotal role in helping save the Armenian Nation from annihilation and express the Armenian people’s collective gratitude for coming to the rescue of the hundreds of thousands of refugees and survivors in the Near East. Recognizing the immense importance of this historical reality and the significance of remembering the U.S.’s humanitarian role in this endeavor, the LA Advertising Coalition agreed to donate all 21 billboards in honor of the Armenian Genocide Centennial.

The eye-catching billboards, produced in two sizes, depict an archival photo of a young Armenian orphan child carrying a box of donated California figs as she stands in solitude, without a mother or father, in tethered orphan clothes. The billboards illustrate the shared pain of the Armenians that resulted from the genocide, as well as highlight the heroic efforts of the NER and American people with bold text that states:

The impressively sized color billboards also feature the Armenian Genocide Centennial Forget-Me-Not purple flower, the America We Thank You (AWTY) committee’s logo and insignia, and the ANCA-WR logo. Additionally, the billboards serve as an advertisement for AWTY’s ongoing event at the LA Public Library which currently houses Near East Foundation’s 28 panel traveling exhibit through the end of April. The billboards were designed by AWTY committee member and graphic artist Patrick Azadian and will be displayed for at least through the month of April and likely longer.

Billboards have been placed all throughout Los Angeles, ranging from different cities in the San Fernando Valley, to Sunland, and West Los Angeles. Specific locations of the billboards are listed below:

Many of these billboards overlook some of the busiest and most congested streets in Los Angeles. This is significant, as nearly 500,000 residents in Southern California are Armenian children and grandchildren of survivors. AWTY Co-Chair Hermineh Pakhanians stated, “What is most compelling about our billboards is that non-Armenians in Los Angeles will be informed about the first genocide of the 20th century, which is a vitally important part of our outreach objectives.” The billboards include the web address to AWTY’s website, where visitors can download each U.S. state’s contribution to the genocide relief efforts and learn historical information about the Armenian Genocide.

Stacy Miller, Executive Director of the Los Angeles Advertising Coalition who worked alongside the committee to bring this project to fruition stated, “A century ago, our country united to support and assist the victims of the first Genocide of the 20th century. In particular, the community of that era made a significant investment in educating Americans about the atrocities occurring to Armenians and others. Today, we are proud to continue this tradition and continue to educate and inform Americans from all walks of life about the Armenian Genocide and the important role America played in saving countless lives.”

“We sincerely thank the Los Angeles Advertising Coalition and all its affiliated groups for securing the generous donations that made the printing and billboard space costs of this important outreach project during the Centennial year possible. This gesture is a concrete expression of the City of Los Angeles’ solidarity with the Armenian people, which has been longstanding and continues to strengthen with each passing year,” concluded AWTY Co-Chair, Vanna Kitsinian, Esq.

AWTY’s website can be accessed by visiting www.AmericaWeThankYou.org. Updates on the committee’s ongoing activities can also be found at the AWTY Facebook page.