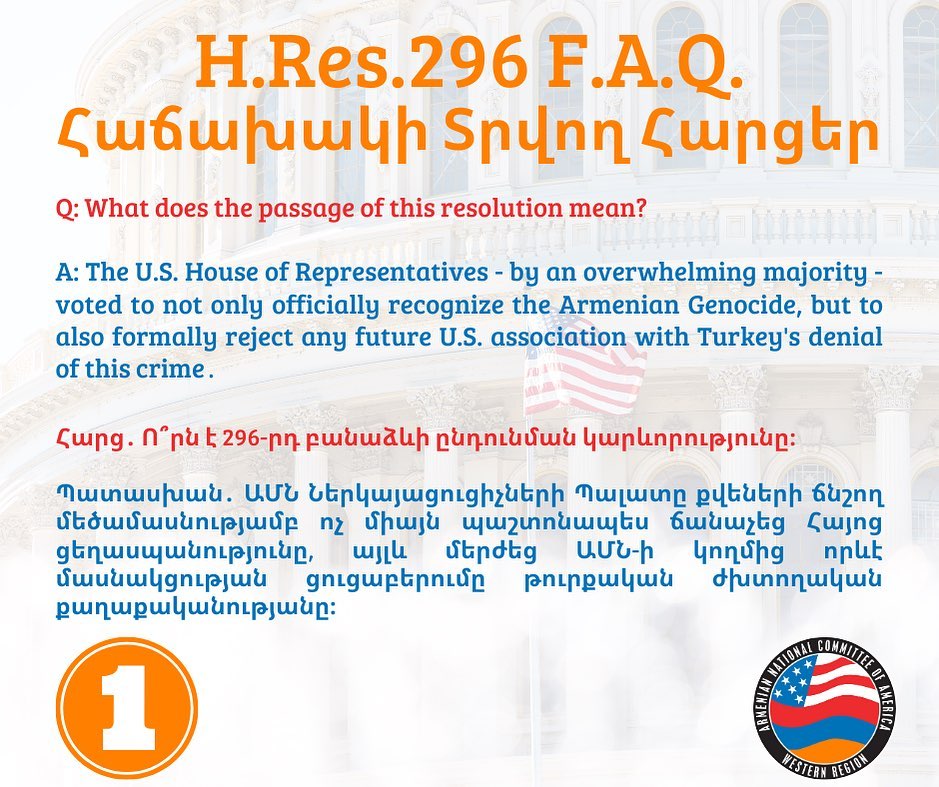 All Your Questions About H.Res.296 Answered

Q: What does the passage of this resolution mean?

A: The U.S. House of Representatives voted almost unanimously in a strong bipartisan vote of 405 to 11 (a) to officially recognize and commemorate the Armenian Genocide, (b) to reject Turkish efforts to associate the U.S. with Turkey’s denialist campaign, and (c) to encourage education about the Armenian Genocide and the U.S. humanitarian Near East Relief effort to rescue survivors․

From a grassroots political advocacy model, it was abundantly clear that passage wouldn’t be possible without the leadership initiative and tireless advocacy of the Armenian American community through the ANCA. For decades, the ANCA has steadily increased the effectiveness of our community’s advocacy, garnering support from our political allies, and seizing the opportunity to push the resolution at a time when U.S.-Turkey relations are at an all-time low. As the Administration stood silent on the issue, our strong allies and friends in Congress, including House Speaker Nancy Pelosi, Congressmembers Adam Schiff, Gus Bilirakis, Anna Eshoo, Jackie Speier, Brad Sherman, Eliot Engel, James McGovern, Frank Pallone, Steny Hoyer, and Chris Smith took the lead in getting the resolution to the floor and the votes secured from both sides of the aisle. We greatly appreciate their unwavering support and leadership in accomplishing this goal.

Q: Who else assisted with the passage of H.Res.296?

A: Coalition building has always been a priority for ANCA and ANCA-WR. A number of influential groups came out to voice their public support for the resolution, including the American Jewish Committee; Anti-Defamation League; Israeli-American Civic Action Network (ICAN); Hellenic American Leadership Council; American Hellenic Council; In Defense of Christians; A Demand For Action; and many others. We are grateful for their support and will continue building bridges and establish working relations with a diverse group of organizations that share our commitment to promoting human rights, historic truth and justice, genocide education, and standing strong against any form of denial.

Q: How does this help us pursue justice?

A: This is a vital step towards affirming the universal truth of the Genocide as we continue our march for justice. We now have an official policy position expressed by the U.S. House of Representatives as we move forward with our Divest Turkey initiative and strategies for reparations. This resolution unequivocally sets policy for the U.S. House of Representatives and is binding upon that body. The next steps will include working with the Senate and the Executive and Judicial branches to make sure every segment of our government is in lockstep with the Congress and the 49 U.S. States which have already recognized the Armenian Genocide. Even without those additional steps, however, the United States has finally joined the list of 30+ countries that have officially recognized the Armenian Genocide.

Q: Does the Resolution now go to the U.S. Senate?

A: No. This is a stand-alone resolution adopted by the U.S. House of Representatives. The Senate version of the resolution is S.Res.150, and its passage will be our next priority. Both resolutions establish the official policy of each chamber of Congress and set the tone and tenor of the U.S. Legislative branch of government. Neither resolution can be vetoed by the President as they do not require his signature in the first place.

Q: How supportive are Republicans and Democrats?

A: The Armenian Cause was never and can never be a partisan issue. It is above partisan politics, as witnessed by the overwhelming 405 “Yay” votes in the U.S. House of Representatives and bipartisan leadership in getting it done. The ANCA-WR is the largest and most influential nonpartisan Armenian American grassroots advocacy organization in the Western United States and works with elected officials from all parties to advance the Armenian Cause.

A: Continue spreading the word to raise awareness about this important issue by following us on social media and sharing our posts. Call and email your U.S. Senators encouraging them to co-sponsor S.Res.150 and vote in favor when brought to the floor. To make this process even easier, sign up as an ANCA Rapid Responder.

Q: What’s different about this resolution than the previous House bills that were passed?

A: Two different Armenian Genocide resolutions have passed in Congress, one in 1975 and another in 1984, but they were “Joint Resolutions” which required passage in both chambers to be fully ratified. Neither resolution made it to the Senate floor, and thus they were void. The current resolution was drafted as a stand-alone or “Simple” piece of legislation, which means it does not require either the signature of the President or passage in the Senate to be considered as policy. This is the first time that there has been an unequivocal policy-level affirmation by the U.S. Government of the Armenian Genocide and is made even stronger by the additional provisions rejecting Turkish denialism and promoting Genocide education.

Q: Was the resolution attached to the Turkey Sanctions bill?

A: The resolution was considered parallel to the sanctions bill, with many of the same supporters championing both measures since Turkey’s current actions in northern Syria mirror the ethnic cleansing that culminated with the Armenian Genocide in 1915. Between the passage of the resolution and the bill on sanctions punishing Turkey for its recent human rights abuses in northern Syria, the U.S. Congress is sending a clear message to Turkey that the United States will no longer be complicit in its escape of accountability for its crimes against humanity.

A: Continue pursuing re-affirmation and education of the Armenian Genocide in all educational institutions. Promote the Divest Turkey initiative to divest public pension funds from investments in Turkish government bonds and entities. We are adding additional dimensions to our advocacy work to include punishment and restitution for this crime against humanity. As U.S. citizens, we must demand that Turkey be sanctioned for its historical and continued atrocities and face consequences for a century of denial and obstruction of justice.