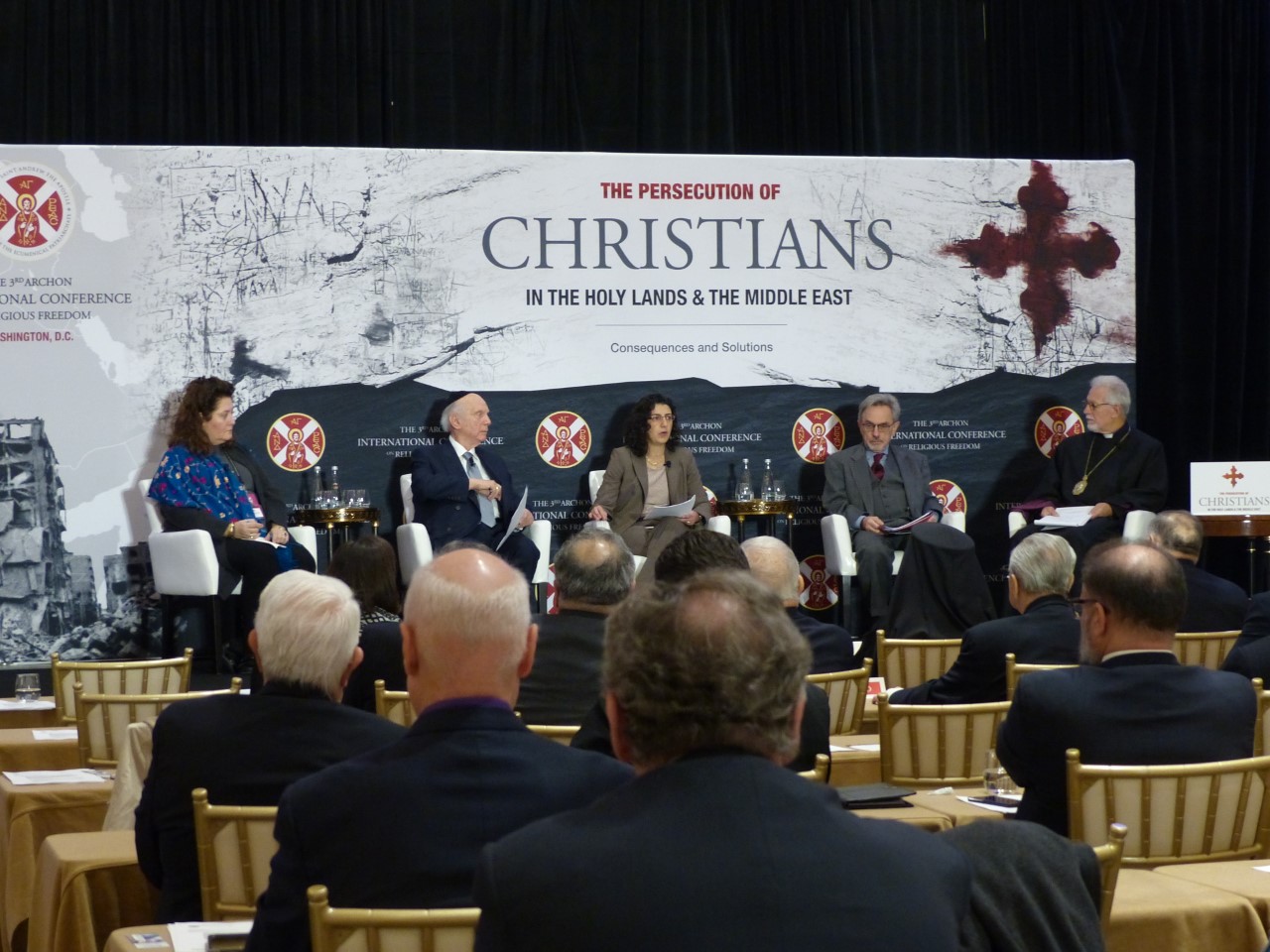 — Members of Congress, Religious Leaders and Advocates from Across the World Gather at Archon International Conference on Religious Freedom

Washington, DC – Kate Nahapetian, Executive Director of the Armenian Legal Center for Justice and Human Rights (ALC), spoke on a December 6th panel on the Protection of Sacred Sites and Property Rights at the Archon International Conference on Religious Freedom in Washington, DC organized by the Order of St. Andrew, Archons of the Ecumenical Patriarchate.

The overarching theme of this year’s discussions was, “Persecution of Christians in the Holy Lands and the Middle East: Consequences and Solutions.” Dr. Elizabeth Prodromou of Tufts University Fletcher School for Law & Diplomacy and a former Commissioner with the U.S. Commission on International Religious Freedom opened the conversation by highlighting the purpose of the frequent destruction of sacred sites, which “are designed to humiliate to remind [religious minorities] that they are second class citizens.”

In her opening remarks, Nahapetian outlined the historic weight of the issue, telling the audience that, “Property issues were integral to realizing the [Armenian] Genocide because if you dispossess the community, you ensure that they are impoverished and that they cannot resist the persecution. If you take away their religious sites, you ensure that they will not return.”

Other panelists, including Archbishop Vicken Aykazian, Ecumenical Director and Diocesan Legate of Diocese of the Armenian Church of America (Eastern), touched on the confiscation of church properties in Turkey pointing out that, “The Armenian Patriarchate in Jerusalem has 950 pieces of property in Constantinople, Smyrna and some parts of Asia Minor. [They] have been trying to get in touch with the Turkish authorities for the last ten years.” According to the Archbishop, to this day not a single piece has been given back.

In a similar vein, Nahapetian further noted that, “Of the over 2000 Armenian churches that existed before the Armenian Genocide, less than 50 of them are operational today in Turkey. Only three of those 50 are outside of Istanbul, and it’s no coincidence that there are very few Armenians outside of Istanbul.”

Nahapetian suggested several solutions to the issue, including creating third party arbitration for issues of religious minority property confiscation, as the court systems in offending countries like Turkey are frequently hostile to such claims and often mount numerous bureaucratic and judicial obstacles to pursuing them.

However, she also explained the frequent insufficiency of treaties in protecting religious minorities and their properties from politically motivated destruction and dispossession, reminding the audience that, “[Treaties protecting the Christian community] are not enough. Before the genocide there were treaties that protected the Christian community of the Ottoman Empire.”

Instead, Nahapetian offered another possible solution, “to document the properties to make them toxic for third party use.” She argued that even in the absence of proper legal remedies, which will inevitably take time to establish, “You can decrease the profit motive in using these properties by third parties who care…including corporations or other investors.” If these properties came with significant political consequence down the road, investing in them, “repurposing” them, would become too expensive an endeavor for third parties to undertake, increasing the incentive to voluntarily return them to the expelled communities.

Nahapetian went on to introduce the ALC’s long term project for doing just that, its Property Documentation Database, announced earlier this year, which catalogues stolen and confiscated properties in modern day Turkey. To submit documentation concerning stolen or lost properties from the Armenian Genocide, individuals can visit: https://armenianlegal.org/document-preservation-form/.

Other panelists included Ambassador Patrick Theros, Representative of the Greek Orthodox Patriarchate of Jerusalem in the United States and Rabbi Arthur Schneier, founder of the Appeal of Conscience Foundation. The panel was chaired by Dr. Anthony Limberakis Commander, Order of Saint Andrew, Archons of the Ecumenical Patriarchate.

Members of Congress from both the Senate and House Foreign Relations Committee, academics from across the country, and religious leaders and human rights advocates from the Greek, Armenian, Syriac and Coptic communities addressed other panels during the three day conference from December 4-6, 2017.

The Armenian Legal Center for Justice and Human Rights (ALC) fights to redress human rights violations emanating from the Armenian Genocide that continue to this day and undermine stability in a region that has for far too long been marred by policies founded on genocide, not human rights and justice. ALC promotes scholarship on the legal avenues for addressing the challenges emanating from the Armenian Genocide, in addition to pursuing cases in national and international courts, while promoting the protection of Armenian cultural heritage through the return of stolen properties and artifacts.

Video of the panel is available here: https://conference.archons.org/video-archive