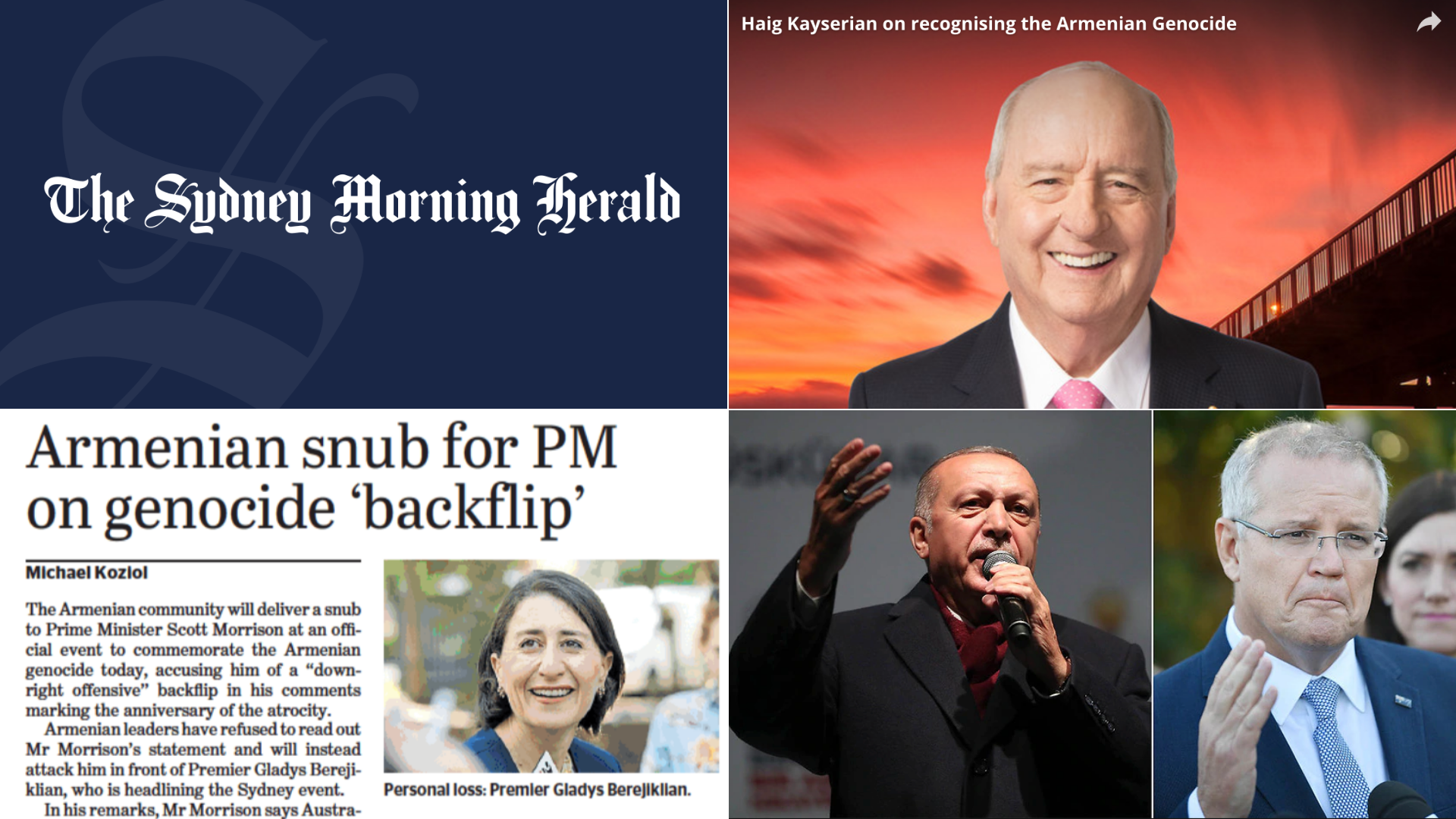 CANBERRA: Leading 2GB Radio broadcaster Alan Jones and an article in the Sydney Morning Herald have led a strong round of Australian media reaction to Prime Minister Scott Morrison’s backflip from his prior positioning on the Armenian Genocide – something that is being seen as an apparent bowing down to pressure from the Turkish State.

Alan Jones told Armenian National Committee of Australia (ANC-AU) Executive Director, Haig Kayserian on his 2GB Breakfast Program: “There’s no way in the world this bloke [Turkey President Recep Tayyip Erdogan] should be allowed in any way to influence Australian policy or what we have to say. We shouldn’t be pandering to him. It was a genocide all those years ago and the Armenian people are entitled to have respectful remembrance.”

Morrison’s statement to Armenian-Australians – marking the 104th anniversary of the systematic attempt to destroy the Armenian race – refers to the Armenian Genocide as “… the horrors that befell Armenian people at the end of the Ottoman Empire”.

In his speech to Parliament on 26th May 2011 – while in Opposition – Morrison had said: “Today, as a member of this House, I join others in this place, and in parliaments around the world, to place on record that I believe the Armenian genocide was one of the greatest crimes against humanity.”

He added: “Many countries have condemned the 1915 genocide at the hands of the Ottoman government. We do not seek to lay blame, this is not an indictment of the modern, secular, Turkish state that we know as a friend, but it is important that we recognise the Armenian genocide for what it was.”

ANC-AU was quoted in an article by Michael Koziol for the Sydney Morning Herald, which was titled “Armenian leaders snub Scott Morrison over ‘offensive backflip’ on genocide declaration”, referencing that the Prime Minister’s statement will not be read out at the National Armenian Genocide Commemoration in Sydney because it is not befitting the occasion to mischaracterise the events of 1915.

The article reads: “The Turkish government objects to the term “genocide”, despite widespread acceptance by historians and scholars… several Liberal MPs have pushed to change the Australian government’s position, including Trent Zimmerman – whose electorate contains a large Armenian population in the suburb of Willoughby – John Alexander, Stuart Robert, Tim Wilson, Craig Kelly and Eric Abetz.”

ANC-AU Executive Director, Haig Kayserian told the Sydney Morning Herald: “His backflip is downright offensive to the 50,000-plus Armenian-Australian community, who are mainly descendants of survivors of the Armenian genocide,” arguing Prime Minister Morrison was “equating it to a car accident” by calling it “horrors that befell the Armenian people” instead of “genocide”.

Alan Jones, who is the highest rating broadcaster on Australian radio, spoke accurately and at length about the Armenian Genocide on his radio program on the morning of 24th April 2019, which marks the 104th anniversary of the 1915 massacres.

Discussing Prime Minister Morrison’s statement, Jones said: “In a surprising statement to a commemoration event today, the Prime Minister says Australia joins with the Armenian Diaspora to mourn and remember the horrors that befell the Armenian people at the end of the Ottoman Empire.”

“Mr. Morrison has used the word genocide before, and the local Armenian community will refuse to read out his statement with a spokesman saying the backflip is downright offensive and equates the genocide to a car crash. I think the Armenian people are correct.”

Later in his program, Jones interviewed Kayserian, who said the Armenian-Australian community was “gutted”.

“What we were expecting from the Prime Minister is not something radical, we weren’t trying to put words in his mouth. It was basically asking him to say what he believed,” Kayserian said.

“However the tentacles of Turkish influence are so strong within the bureaucratic corridors of the Department of Foreign Affairs and Trade, that the speech they seem to have drafted for Scott Morrison is one that has completely gutted us and disappointed our community,” he added.

Alan Jones added: “Erdogan is not worth two bob. There’s no way in the world this bloke should be allowed in any way to influence Australian policy or what we have to say. We shouldn’t be pandering to him. It was a genocide all those years ago and the Armenian people are entitled to have respectful remembrance.”