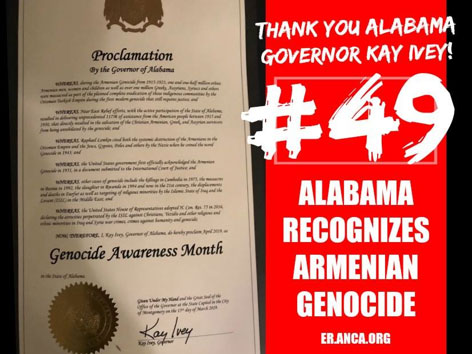 “We welcome this proclamation by Governor Ivey, making Alabama the 49th state in the union to officially re-affirm this international crime against humanity,” said ANCA-ER Board Chairman Steve Mesrobian. “This proclamation serves as a powerful reminder that truth about genocides should never be held hostage to the denial of its perpetrators and those who continue to profit from that crime. We salute the Alabama Armenian community and our ANCA coalition partners who together stand united in our efforts to create awareness about the Armenian Genocide and prevent future such atrocities,” said Mesrobian.

“I am so proud of the work that the ANC of Alabama and our friends in Alabama have done to obtain this official recognition of the Armenian Genocide,” said ANC of Alabama activist Jack Hagopian. “Armenians have long called Alabama home, aiding in the education and awareness of the Armenian Genocide throughout the state. It brings me great pleasure to know that our work has been successful. I know that we will continue to educate, motivate and activate our community to ensure that the cycle of genocide comes to an end.”

With the addition of Alabama as the 49th state, Mississippi remains as the last U.S. state to officially recognize the Armenian Genocide.
The full text of Gov. Ivey’s proclamation is provided below.

WHEREAS, during the Armenian Genocide from 1915-1923, one and one-half million ethnic Armenian men, women and children as well as over one million Greeks, Assyrians, Syriacs and others were massacred as part of the planned complete eradication of those indigenous communities by the Ottoman Turkish Empire during the first modern genocide that still requires justice; and

WHEREAS, Near East Relief’s efforts, with the active participation of the State of Alabama, resulted in delivering unprecedented 117 million dollars of assistance from the American people between 1915 and 1930, that directly resulted in the salvation of the Christian Armenian, Greek, and Assyrian survivors from being completely annihilated by the genocide; and

WHEREAS, Raphael Lemkin cited both the systemic destruction of the Armenians in the Ottoman Empire and the Jews, Gypsies, Poles and others by the Nazis when he coined the word Genocide in 1943; and

WHEREAS, the United States government first officially acknowledged the Armenian Genocide in 1951, in a document submitted to the International Court of Justice; and

WHEREAS, the United States House of Representatives adopted H. Con. Res. 75 in 2016, declaring the atrocities perpetrated by the ISIL against Christians, Yezidis and other religious and ethnic minorities in Iraq and Syria war crimes, crimes against humanity and genocide; and

NOW, THEREFORE, I, Kay Ivey, Governor of the State of Alabama, do hereby proclaim April 2019 as GENOCIDE AWARENESS MONTH.