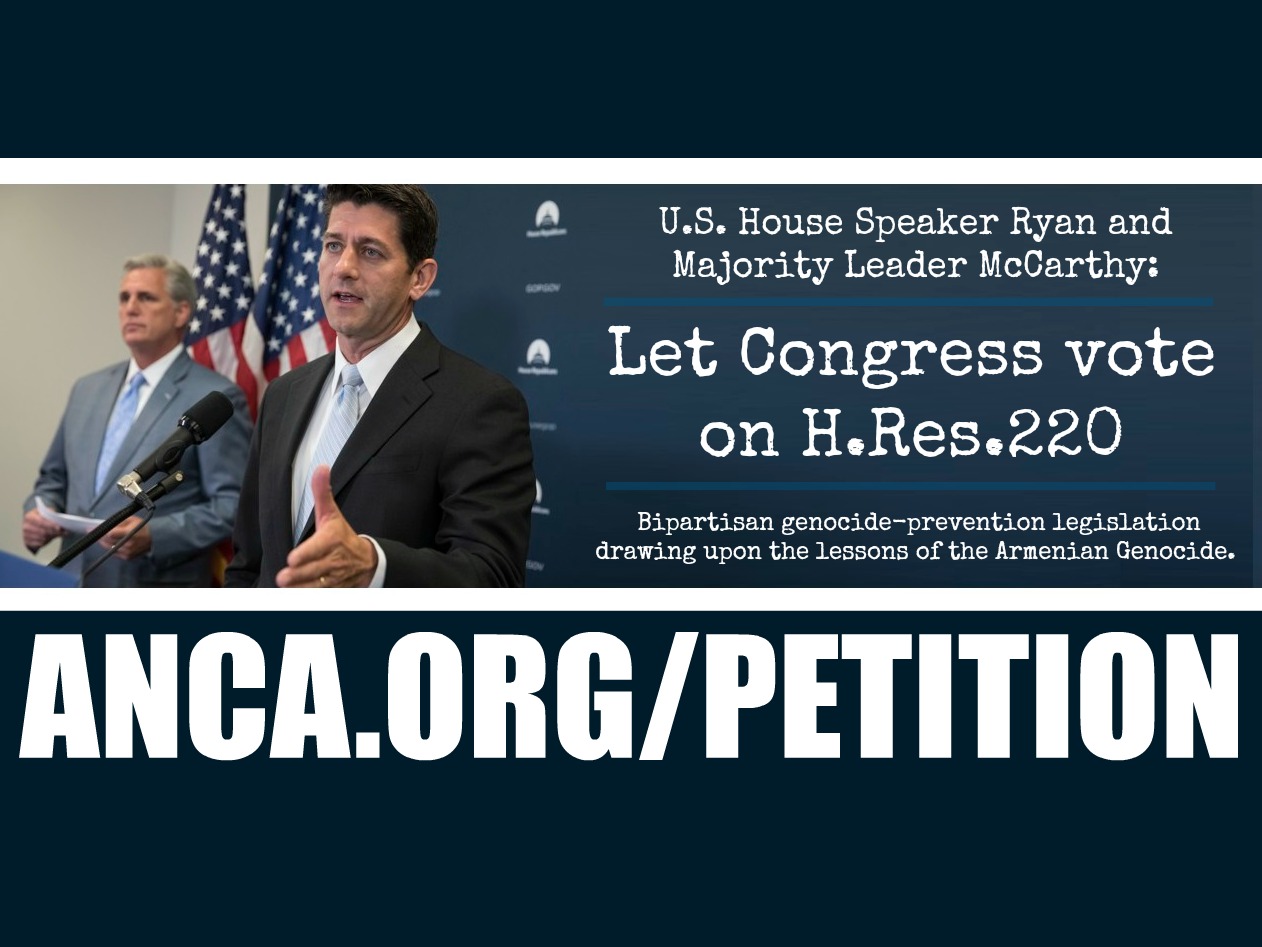 Activists Call on U.S. House Republican Leadership to Allow a Vote on H.Res.220

WASHINGTON, DC – Amid unprecedented strains in U.S.-Turkey ties – with Ankara’s traditional advocates and apologists on Capitol Hill running for cover – the Armenian National Committee of America (ANCA) has launched a petition drive asking U.S. House Speaker Paul Ryan (R-WI) and Majority Leaders Kevin McCarthy (R-CA) to schedule an immediate up-or-down vote on H.Res.220, a bipartisan genocide-prevention measure that draws upon the lessons of the Armenian Genocide and the broader Ottoman Turkish genocidal campaign to destroy Armenian, Greek, Assyrian, Chaldean, Syriac and other Christian nations on their biblical-era homelands.
]
The link to the petition is www.anca.org/petition.

Speaker Ryan, Majority Leader McCarthy, Minority Leader Nancy Pelosi (D-CA), and Minority Whip Steny Hoyer (D-MD) are all on record, during their Congressional tenures, supporting U.S. recognition of the Armenian Genocide. Among the measure’s more than 120 cosponsors are Chairman Ed Royce (R-CA) and Ranking Democrat Engel of the Foreign Affairs Committee and Chairman Nunes and Ranking Democrat Schiff of the Permanent Select Committee on Intelligence.

“Today, Turkey stands alone. Congressional advocates and apologists who once covered for Turkey on Capitol Hill are today running for cover themselves,” said ANCA Director Aram Hamparian. “As we approach a closely contested mid-term election, it’s only Erdogan’s Embassy and the lobbyists on his payroll who are working overtime against H.Res.220 – and their strategy is to block a vote because they know that Members of Congress, given the chance, will overwhelmingly pass this straightforward genocide-prevention measure.”

H.Res.220 is a humanitarian measure that speaks to both the human rights and religious freedom aspects of U.S. leadership in the prevention of genocide and other atrocities. It specifically encourages the U.S. government to draw upon the lessons of the Ottoman Empire’s 1915-1923 genocide of Armenians and other Christians in order to help prevent modern-day atrocities against religious and ethnic minorities. The Armenian Genocide has been recognized by 48 U.S. states and more than a dozen NATO allies, including Germany and France. The Eisenhower and Reagan administrations each went on record recognizing the Armenian Genocide, but recent U.S. administrations have, avoided using this term, in deference to Turkey’s irrational sensitivities.

The ANCA’s aim – as outlined in the ANCA360 review of Armenian American policy priorities – is “breaking with U.S. complicity in Turkey’s denial of the Armenian Genocide, clearing the way for active American leadership including direct, sustained U.S. pressure on Turkey toward a truthful, just, and comprehensive resolution of this crime.”