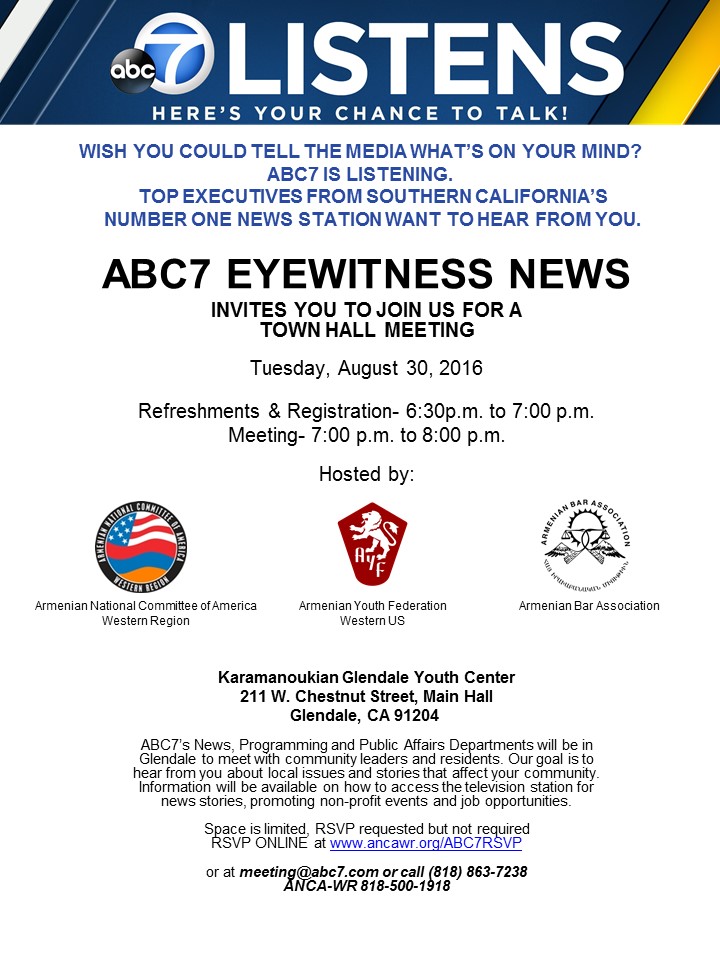 LOS ANGELES—In partnership with ABC7 television news, the Armenian National Committee of America-Western Region (ANCA-WR), the Armenian Youth Federation Western US (AYF-WUS), and the Armenian Bar Association (ABA) will host a public Town Hall on Tuesday, August 30th, at 6:30pm at the Karamanoukian Glendale Youth Center (211 W. Chestnut St., Glendale, CA 91204). The first of its kind, the effort is aimed at cultivating a positive relationship between the news station and Armenian community members that reside in Southern California.

“We are delighted to partner with ABC7 on what will surely be a productive event aimed at facilitating dialogue between a major local news station and our community, and we are grateful to the station’s leadership for working with us and the AYF by providing a medium for our community members to express the issues that are important to them, including coverage of our community and its activities,” stated ANCA-WR Executive Director Elen Asatryan.

“ABC7 thanks the Armenian National Committee of America-Western Region and the Armenian Youth Federation-Western US for hosting our next ‘ABC7 Listens’ Town Hall meeting. For the last 11 years these meetings have provided people in communities around Southern California a unique and personal opportunity to share their stories. We are pleased to be holding this meeting in Glendale, where ABC7 is located,” said Cheryl Fair, President & General Manager of ABC7.

Station President Cheryl Fair will be joined at the Town Hall by representatives from ABC7’s News, Programming and Public Affairs Departments to meet with community leaders and residents and to hear about local issues and stories that affect the community. Information will also be available on how to access the television station for news stories, how to promote non-profit events, and how to secure job opportunities. The event will begin with a reception and registration at 6:30pm, followed by a listen-in at 7:00pm. Translation will also be provided in Armenian to community members with language barriers. As space is limited, community members are encouraged to RSVP online at www.ancawr.org/abc7rsvp, to ABC7 at meeting@abc7.com or 818.593.7238 or ANCA-WR at rsvp@ancawr.org or 818.500.1918.

The public Town Hall is a direct result of a meeting that took place between the ANCA-WR, AYF WUS, the ABA and KABC–TV’s leadership following a news report on the April 24th Rally for Justice protest during which the station included a known Armenian Genocide denier on air and the cameraman was caught on tape making bigoted anti-Armenian comments. At the time, the Armenian-American community expressed its outrage by reaching out to ABC7 by phone, email and social media to register its complaints and grievance. The station took immediate action confirming that the cameraman’s services will no longer be utilized, and issuing a statement of apology following the meeting along with a promise to work closely with the community in the future.

“We are hopeful that with continued communication, we can work with our respective local news and media outlets to ensure that our community’s issues are covered accurately with respect to the hundreds of thousands of Armenian Americans living in the region,” stated AYF-WUS Chairman Gev Iskajyan.

The Armenian National Committee of America-Western Region is the largest and most influential Armenian American grassroots advocacy organization in the Western United States. Working in coordination with a network of offices, chapters, and supporters throughout the Western United States and affiliated organizations around the country, the ANCA-WR advances the concerns of the Armenian-American community on a broad range of issues.