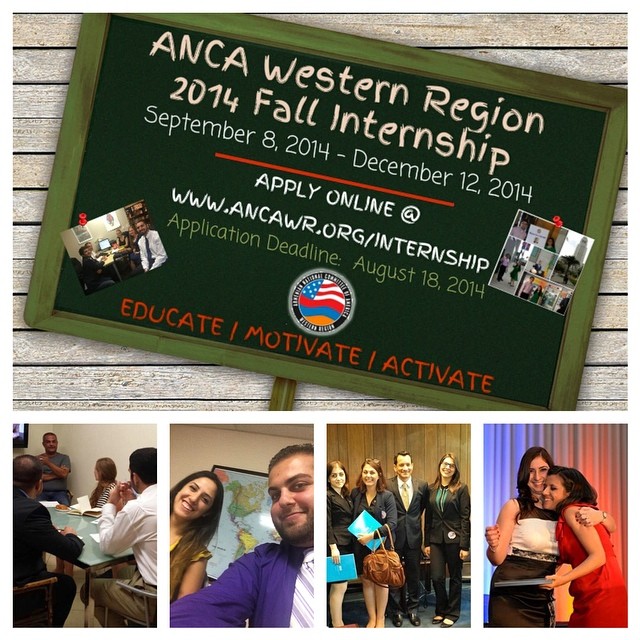 A Part of Something Bigger

Looking back, I got so much more out of this internship than I expected. The internship was specifically catered to help us grow as individuals. Aside from the hands on tasks that were assigned, we had workshops that were designed to help us acquire new skills or better the ones we already had. Professionals in their respective fields volunteered their time to offer us their own insights and areas of expertise. I felt that the people around me, people I barely knew, genuinely wanted to help me and see me succeed.

Our first workshop was with Mourad Topalian, who made me realize how a small number of people can influence and become a nation-wide activist group on behalf of the Armenian diaspora in the United States. Mr. Topalian showed us that the fight for our cause began in the time of the 1960’s social movements. He also pointed out, which was important to me, that our fight is no longer an arms revolution, but rather a political revolution. That is why I am here, working with the ANCA; I get to be a part of something bigger, a part of the fight for justice.

Aram Hamparian gave us a workshop all the way from Washington D.C. In our Skype session, Mr. Hamparian helped us get a deeper understanding of the issues we are advocating for and working on. He broke down the issues, from genocide recognition to the Nagorno-Karabakh history and current issues, and made us feel comfortable asking any questions we had. Additionally, Mr. Hamparian explained that we have pivoted away from a straight recognition approach- in regards to the genocide- and moved to a return and reparation approach. This made me confident in how the ANCA gets things done, in progressive rather than stagnant manner.

Aris Hovasapian taught us the ins and outs of using Microsoft Excel. He patiently did demonstrations for us and helped us get a hang of Excel, moving beyond the basics. He gave us skills that will give us a one-up against competitors in the job market.
Haig Baghdassarian came over from San Francisco and talked to us about advocacy He conveyed all the hard work it takes to get bills passed and also about current bills that the ANCA is working on.

Mike Gedjeyan gave us a workshop on resumes and helped us make ourselves marketable to an employer. With his great energy and constructive outlook, Mr. Gedjeyan showed us how to tie our skills in with our experiences on our resumes, rather than just listing what we’ve done in the past. Additionally, I believe we attained skills and connections that I am confident will later help us in entering the job market.

One of my favorite workshops was with Steve Artinian. He talked to us about media and what a large difference it can make on people’s willingness to participate and be active in the community. As a prospective Media Studies major, I found what he had to say to be enlightening because I had never realized that approaching people in a manner specific to their interests could get them more engaged. Similarly, on our tour of the Asbarez office with English Editor Ara Khachatourian, I realized that media has the power to influence how history unfolds.

There were so many more that I hope to cover later. From our one on one meetings with elected officials and community leaders to workshops on how the community has evolved and grown throughout the years to the nitty-gritty of things like how to write fundraising letters, proposals, and press releases and how to organize and advocate for a cause you believe in.

My fellow interns and I really enjoyed meeting all of these successful, hardworking individuals who were kind enough to speak to us. They made our experience even more worthwhile and gave us much to take from it.

Working with my fellow interns was also a great part of this internship. They made a space of four walls a place where we can express ourselves, laugh, ask questions, and learn from one another. I have never bonded with a group of peers so quickly.

I feel as though this internship has helped me transcend my beliefs and passion for the Armenian cause into an active fight for justice. I am inspired and confident in the work the ANCA is doing, and will remain active as we continue to fight for our cause and our voice, and carry the responsibility on all our behalf.