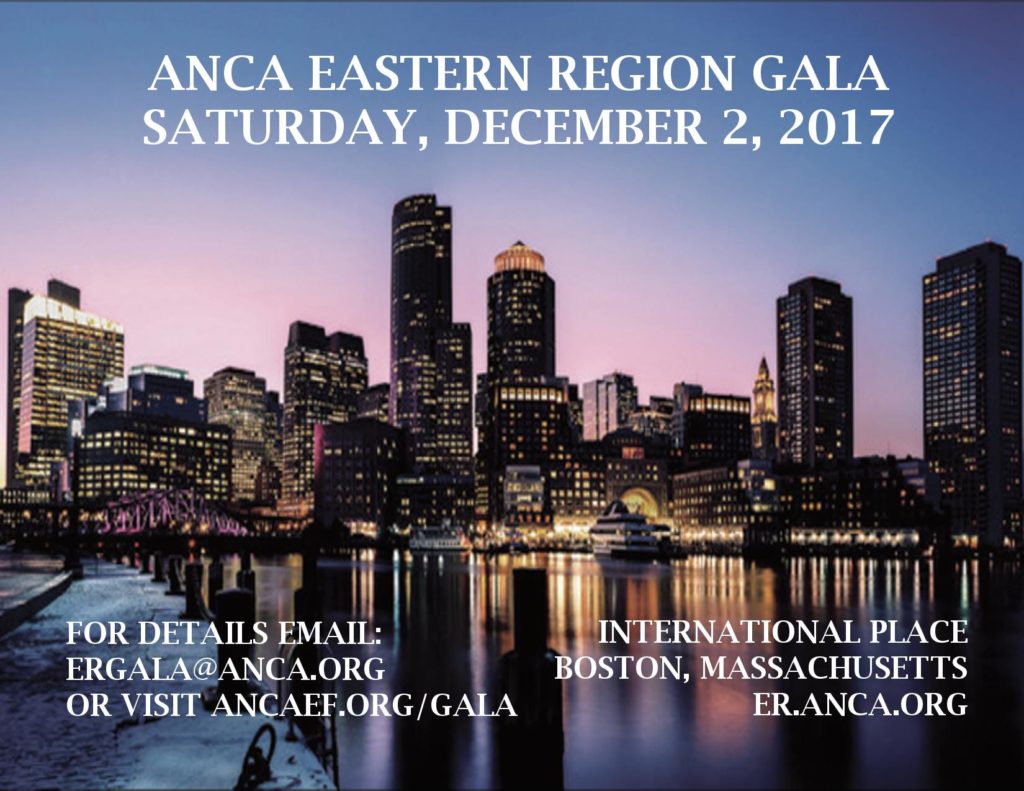 A Limited Number of Tickets Available for Dec. 2 ANCA-ER Gala in Downtown Boston

BOSTON—A limited number of tickets are still available for the 2017 Armenian National Committee of America-Eastern Region (ANCA-ER) Gala, to be held Saturday, Dec. 2 in downtown Boston.

Armenian-Americans throughout the Eastern United States will be joining together to celebrate a year of civic activism at the 2017 gala, sponsored by the ANCA Eastern Region Endowment Fund.

This year’s event, which is dedicated to the 30th anniversary of Artsakh Liberation Movement, will begin with an elegant cocktail reception (open bar for beer and wine) and silent auction at 6 p.m., followed by buffet dinner and awards ceremony at 7 p.m.

During the event, longtime Hai Tahd advocate Carolann Najarian will also be honored with the prestigious Vahan Cardashian Award, which is given annually to an ANCA supporter who has demonstrated longstanding dedication and active involvement in the Armenian-American community and its priorities. The award is named after Yale-educated lawyer Vahan Cardashian, who set aside his successful New York practice to dedicate himself to the establishment of the American Committee for the Independence of Armenia (ACIA), predecessor organization of the ANCA, and to advocate for the plight of the Armenian Nation.

Acclaimed author, lawyer, and human rights advocate Anna Astvatsaturian Turcotte will also be honored at the event, with the ANCA-ER Activism Award. The award is presented to individuals and organizations who work toward the enhancement of human rights, democracy, truth, and justice in the United States, Armenia, Artsakh, Turkey, and beyond.

The gala will be emceed by Jack Antounian, founder of Armenian Business Network.

Tickets are $125 per person and can be purchased at ancaef.org/gala.

A discounted $14 garage parking rate will be available at 2 International Place, Boston, Mass. 02110.