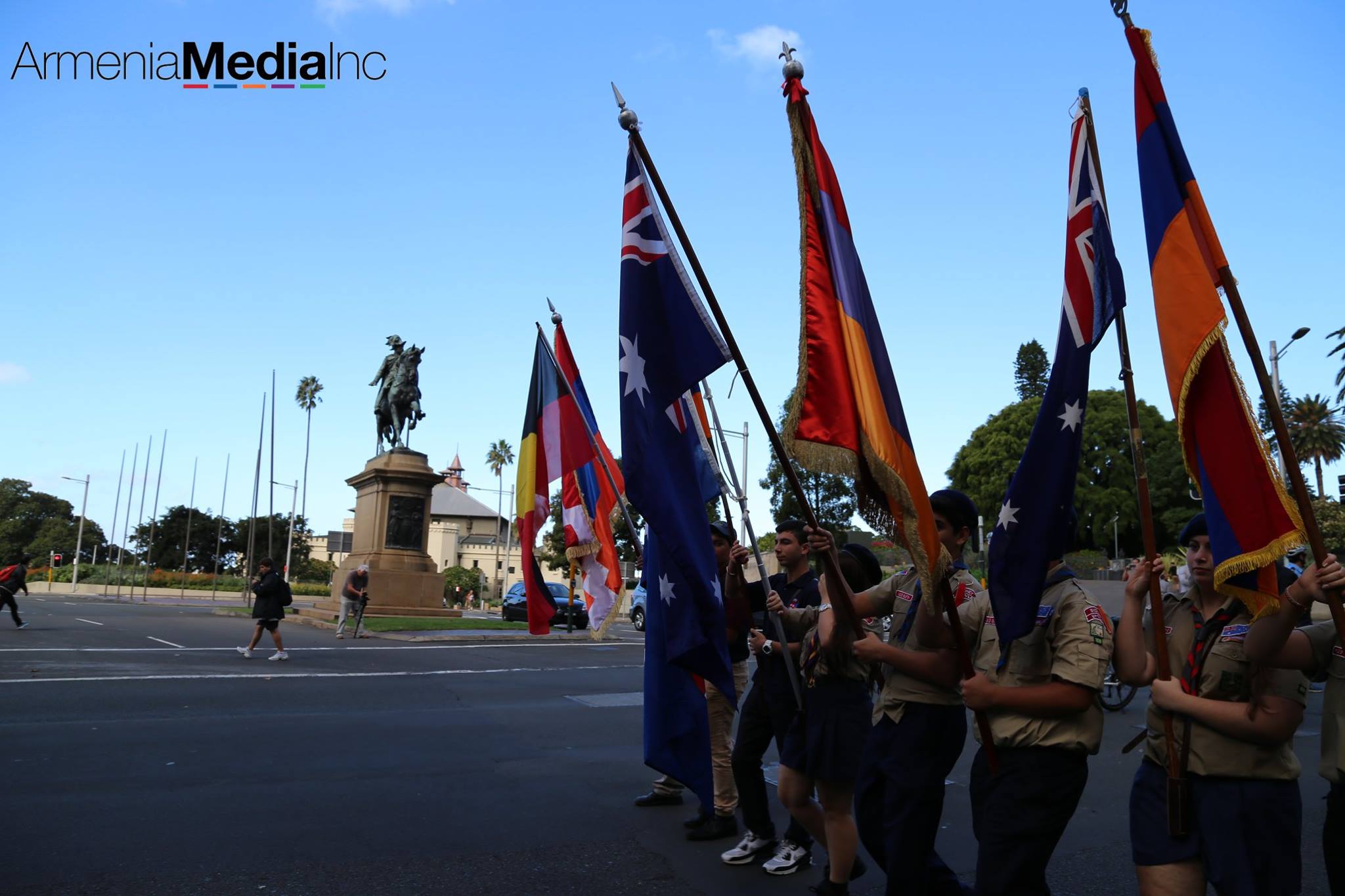 3,000 Armenians #MARCHFORJUSTICE in Sydney City on 101st Anniversary of the Armenian Genocide

(Armenia Online) SYDNEY: On Sunday, April 24th 2016, the Armenian-Australian community participated in a #MARCHFORJUSTICE in Sydney, where one of the City’s most popular roads, Macquarie Street, was closed to mark the 101st Anniversary of the Armenian Genocide. Authorities estimated figures of participants at around 3,000.

The March was preceded by a concerted public relations effort, which saw the Armenian Youth Federation of Australia (AYF Australia) stage a “Die-In” inside the Pitt Street Mall attracting the attention of thousands of passers-by (click here for live video recording), followed by the AYF Australia members handing out thousands of flyers explaining the objective of the Sydney #MARCHFORJUSTICE (click here to see flyer).

The Homenetmen Marching Band was followed by the flags of Australia, NSW, the Indigenous Aboriginals of Australia, Armenia and Artsakh (Republic of Nagorno Karabakh). The clergy representing Armenian churches followed, then a representative of the NSW Parliament and heads of Armenian-Australian political, cultural, sporting, youth and relief organisations. Homenetmen Scouts and AYF Australia were then followed in the procession by members of the Armenian Relief Society, Armenian Schools and Dance Groups, and members of the Armenian-Australian community.

The Sydney March for Justice began at the famous Archibold Fountain in Hyde Park, followed through Macquarie Street past the NSW State Parliament House, then concluded at Tarpeian Way in the Royal Botanic Gardens, where a Special Program was witnessed with the backdrop of the Sydney Harbour Bridge and Sydney Opera House.

Following the Australian and Armenian National Anthems, performed by Galstaun College’s Tamar Aghajanian accompanied by the Homenetmen Marching Band, Vache Kahramanian of the Armenian National Committee of Australia (ANC Australia) commenced proceedings by leading the gathered in a chant “We Demand Justice” and a passionate speech explaining why we were gathered on the 101st Anniversary of the Armenian Genocide.

Kooyr Janet Nalbandian spoke on behalf of Homenetmen Australia Scouts, expressing that the presence of thousands of Armenians at a March for Justice in faraway Sydney Australia proved that Turkey had failed (click here).

Ungeroohi Vani Hamamdjian spoke on behalf of AYF Australia Seniors and Juniors, passionately expressing that Armenians were ready to take all measures necessary to achieve justice for the Armenian Genocide (click here).

Armenian Revolutionary Federation Chairman, Unger Haig Kayserian delivered the Keynote Address on behalf of organisers of the #MARCHFORJUSTICE, focusing on the community’s undying demand for justice of the Armenian Genocide by Turkey, recognition of the Armenian Genocide by Australia and the undying commitment of Armenians globally to the self-determination of the Republic of Nagorno Karabakh (Artsakh) (click here).

Ara Megerditchian of the #MARCHFORJUSTICE Organising Committee said: “We marched as a community in Sydney’s City for the first time in over 30 years, and were able to express to Turkey and all others concerned that the second Centenary since the Armenian Genocide would not begin with anything other than a renewed commitment for justice in the name of our 1.5 million ancestors who lost their lives in 1915.”