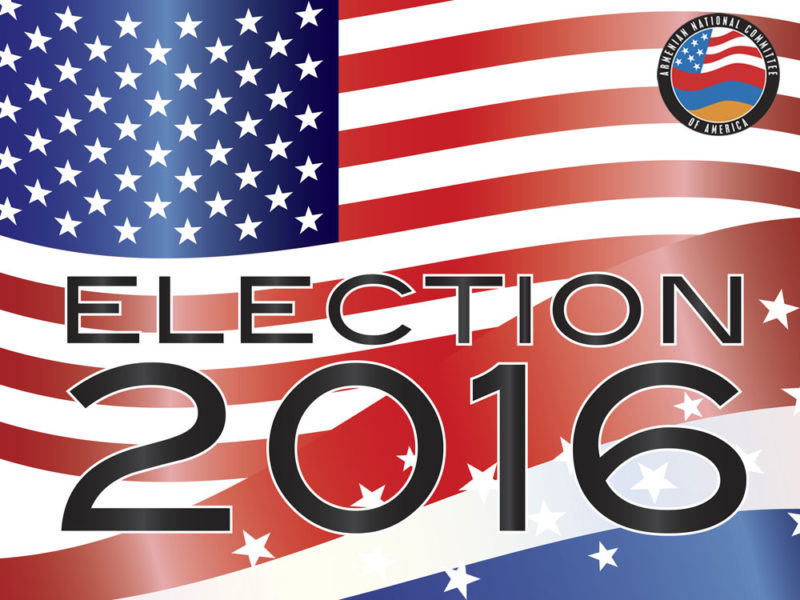 WASHINGTON, DC – Over 93% of the Congressional candidates backed by the Armenian National Committee of America (ANCA) prevailed in yesterday’s hard-fought elections, as U.S. voters elected Donald Trump President and maintained Republican majorities in the Senate and House.

“We congratulate Donald Trump on his victory, commend Secretary Clinton on a hard-fought campaign, and thank Armenian American voters who went to the polls in record numbers to back federal, state, and local candidates who champion issues of special concern to our community,” said ANCA Executive Director Aram Hamparian. “We look forward to getting to work right away in engaging with the Trump Administration and the incoming Congress to make progress on the full range of the Armenian American community’s public policy priorities.”

Among the House races in which ANCA endorsed candidates were not successful were those involving New Jersey Republican Scott Garrett, Nevada Republican Cresent Hardy, and Florida Republican John Mica.

In over 30 states and hundreds of Congressional Districts across the United States in which the ANCA endorsed candidates ran, the ANCA sent hundreds of thousands of customized e-mail messages and shared specialized social media posts with Armenian American voters. These messages featured the ANCA grade for each candidate, news about whether the ANCA has endorsed their campaign, and a listing of ANCA records and ratings for their state’s full Congressional delegation.

A key element of this effort, as in years past, has been ANCA Congressional Report Cards, a detailed review and rating of the records of each Congressional incumbent on more than a dozen individual legislative initiatives of special concern to Armenian American voters.

To see the complete ANCA Report Cards from the 114th Congress, visit:
https://anca.org/report-card/

** Ordered by State, then by Senate and Congressional District.
** Names are listed as follows: District, Name, (Party)

(ASBAREZ) LOS ANGELES—While Donald Trump’s ascent to the US presidency has dominated the election news cycle, candidates vying for federal, state and local offices also had reason to celebrate Tuesday night, as an overwhelming majority of candidates endorsed by the Armenian National Committee of America-Western Region won their races.

On the California State Assembly front, the much-watched and anticipated race in the 43rd district saw Glendale City Councilmember Laura Friedman defeat Glendale City Clerk Ardy Kassakhian, in a race marred by Friedman’s underhanded tactics, which often saw overt anti-Armenian assertions. On Wednesday morning, campaign officials and the ANCA-WR Hye Votes administrators were working hard to tally the Armenian vote, which was at its highest during the June 7 California Primary Elections.

ANCA-WR-endorsed candidate Katheryn Barger won her bid for the Los Angeles County Supervisor’s seat, which was long held by Antonovich who was termed out.

Californians voted to elect State Attorney General Kamal Harris to the US Senate, filling the vacancy left by Barbara Boxer who held that position since 1992 and who announced her retirement earlier this year. Thus, ANCA-WR-endorsed Rep. Loretta Sanchez was unsuccessful in her bid for that seat.

All ANCA-WR-endorsed candidates for the House of Representatives won their elections on Tuesday.

The ANCA-WR-endorsed Measure GC, a $325-million bond that will pay for major upgrades at Glendale Community College, handily was approved by the 73 percent of voters.