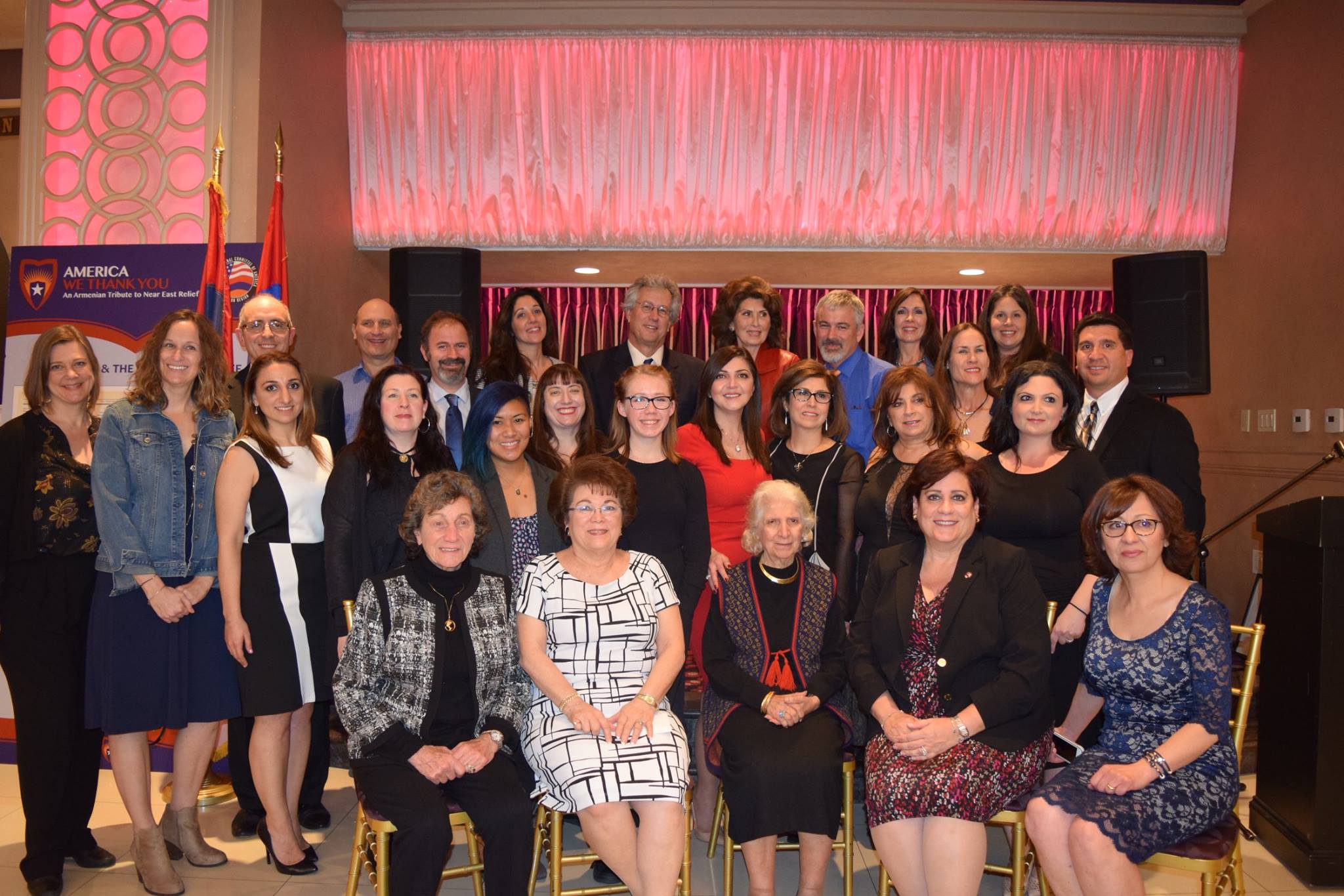 Los Angeles, CA —On Saturday, February 25, an overflow crowd of more than 200 supporters, including local and state elected officials, and community leaders gathered at the Armenian National Committee of America – Western Region (ANCA-WR) Armenian Genocide Education Award Luncheon. The event, held at Dream Palace Banquet Hall in Glendale, honored 19 public school educators for going above and beyond the call of duty to teach the Armenian Genocide.

“Our heartfelt appreciation goes out to all those who made this memorable event such a success. From our incredible and deserving teachers for their efforts and heartwarming messages to our dedicated Education Committee Chair, Alice Petrossian and members Sarine Boyadjian, Sedda Atekelian, Armine Bazikian, Medea Kalognomos, Laura Michael, Dr. Kay Mouradian, Hoori Chalian for this visionary concept and their relentless work on the education front,” stated ANCA-WR Executive Director Elen Asatryan.

ANCA-WR Chair, Nora Hovsepian, Esq. then took to the podium noting, ” The best way to counter the geopolitical efforts to suppress recognition and justice for the Armenian Genocide is through education, and that is why we are here today.” Hovsepian added, “On the legislative front, 44 of the 50 U.S. states have unequivocally recognized the Armenian Genocide through our collective efforts, and we continue to work on the remaining six states and the federal government to do the same, and to go beyond mere recognition by calling for reparations and accountability.” She concluded, “ It is only through the collective efforts of those who seek justice and all who strive to learn the lessons of history, that attempts by turkey and its allies to escape accountability will be thwarted, and justice for the Armenian people will be served.”

California State Senator Anthony Portantino addressed attendees, “I am a father of a public school daughter, and I truly believe in the importance of education, and having ANCA-Western Region working with legislature to get Armenian genocide curriculum in schools in California is a really big deal. It is really important to have history taught accurately in the face of genocide deniers.” Portantino continued, “I am going to try to put something in the budget this year for curriculum training for our teachers on this very subject- the Armenian Genocide.”

Los Angeles Unified School District Board President, who received an early endorsement from the ANCA-WR and its local chapters several months ago for his re-election bid followed Portantino to congratulate the honorees and address the significance of genocide education within public schools. “Any genocide denied is every genocide denied,” noted Zimmer, adding that “this cause is deeply rooted in the American dream. If we, through public education, continue to make American dreams come true, then we must be aggressively and intentionally involved in this cause, not only for full recognition, but also for reparation and healing. Until that day comes, we will not rest.”

Zimmer concluded his remarks with, “I want to say to the teachers in this room, who are being honored today, we are so proud of you. By doing this work, by making sure that truth, courageous truth is part of history and a part of your curriculum in the classroom, you are elevating the true meaning of what it is to be a teacher.”

City of Glendale Mayor Paula Devine echoed Zimmer’s sentiments and topped it off with “To be honored, to be chosen, as a special teacher, as an excellent teacher, is something that rarely happens, and when it does happen, it’s so important. So I too, am so proud of all of you. The teaching of Genocide is extremely important to the youth, and it’s important that everyone, every student learn about this.”

Mayor of City of Burbank Jess Talamantes was the last of the elected officials taking to the podium, “I am very proud of BUSD Board of Education, that last year, passed a resolution, not only to have one day of remembrance but to have the entire month of April as the month of remembrance for the genocide.”

During the event, three students from Grant High School, Mariam Baghdasaryan, Angela Manukyan, and Susie Abashyan, performed a deeply moving piece conveying a message to the audience: the yearning to return to Giligia, an ancient Armenian land, and the title to the song accompanying their dance.

One of the highlights of the event was a presentation by Ms. Lauren Bittle, a student from Fruitvale High School in Bakersfield, California who brought to the stage, her California State History Day Championship winning project, “Genocide Denied; The Violent Encounter of 1915.” With her presentation, Ms. Bittle transported the audience to Ottoman Turkey, circa 1915. The audience witnessed the fear, loss, struggles of deportation through the eyes of Anoush, a genocide victim.

Makasdjian noted that “over her 34 year teaching career, Sara connected very closely with her students, engaging them in the curriculum in ways that really excited them. Her strong sense of her own history, a child of Armenian genocide survivors, gave her a very personal and effective entre, introducing her students to world cultures and the universal questions of human rights and justice.” Makasdjian continued, “She spearheaded the effort to allow Armenian-American students an excused absence on april 24th, she also lead efforts to integrate newly arrived students from Armenia into the school district.” On Sara’s continued efforts to enrich the Armenian community, Makasdjian added, “After her retirement, Sara has sought out all kinds of educational endeavors to continue to support from making it possible for students to pursue Armenian studies as a career to supporting even archaeological research on newly discovered Armenian artifacts, and translating and publishing her father’s memoir of his genocide survival.”

Sara Chitjian accepted the legacy award, and expressed gratitude for the recognition of her life’s work. Chitjian explained how she started teaching Armenian Genocide, “I had done a mini class, at the end of the year. The last month, the teachers had to pick a topic that wasn’t in the curriculum. It usually was the arts and music, and I didn’t have that talent. All of a sudden, somebody said do something Armenian. That grew into a program. And after that program, ethnic studies became mandatory.” Chitjian graciously congratulated the honorees, and encouraged them to continue their work teaching genocide education. Chitjian concluded her remarks on a light-hearted note, stating “I’m really impressed that you remember me.”

ANCA-WR Education Committee Chair, Alice Petrossian, highlighted the significance of genocide education within public school curriculum, stating, “Please know, that teaching of genocide is absolutely a must. It is not only in the framework, in the curriculum, but it is something we all should be teaching throughout the curriculum.”

Headquartered in Los Angeles, the Armenian National Committee of America-Western Region is the largest and most influential Armenian American grassroots advocacy organization in the Western United States. Working in coordination with a network of offices, chapters, and supporters throughout the Western United States and affiliated organizations around the country, the ANCA-WR advances the concerns of the Armenian American community on a broad range of issues.