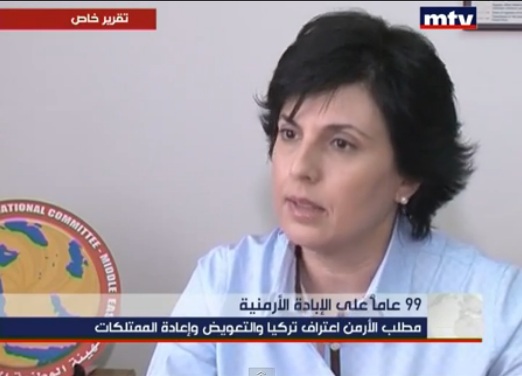 How Arabs reached out to Armenians amid 1915 massacre

Many survivor accounts describe how Arabs offered help and shelter, even adopting orphans when they could.

(Al Jazeera) Beirut – As Armenians and Turks mark the centenary of the disputed events of 1915 – what Armenians claim was “genocide” and Turks insist were counterinsurgency measures – a number of events have taken place to commemorate the tragedy and give voice to the families impacted.

But little has been said of the role played by Arabs in addressing the humanitarian disaster that ensued as tens of thousands of refugees and orphans streamed out of Anatolia.

“The Arab role in helping the Armenians during [these events] is very much understudied,” Reverend Paul Haidostian, president of Hagazian University and an Armenian scholar, told Al Jazeera.

“It started with individual Arabs, especially tribal leaders from the Syrian desert, [who] tried to save the Armenians who were forced on their death marches,” he explained. “They tried to help in any way they were able to; either by adopting the orphans or feeding the people – trying to save them somehow.”

After the Turks deported the Armenians in what have been called “death marches” to Deir Ezzor in Syria and the deserts in Iraq, areas considered to be predominantly Muslim-inhabited, many survivor accounts describe how Arabs offered help and shelter.

“When Armenian communities were able to reach cities like Aleppo, one task was to try and reunite with each other, find the orphans and bring them back [into the communities],” Haidostian said. Through contacts and word of mouth, many Arab families who had adopted the orphans returned them to their communities. “This was a very common theme; that the orphans would be ‘lost’ for a few years and then they would find their way back to their families. It happened to thousands of Armenians.”

Not all orphans were so lucky. Some fell victim to the massacres at the hands of the Turks or Kurdish tribesmen. Orphanages in the provinces set up by the Turks for Armenians who had lost their parents introduced Turkification programmes, where they would force children of non-Turkish ethnicity to convert to Islam and change their names to Turkish ones.

In other cases, Armenian children would be adopted by Arabs and fully integrated into the Arab-Muslim way of life. “There are of course children who would be adopted but were not able to save their Armenian identity,” Haidostian said. “The point is their lives were saved, though.”

In the period leading up to the mass killings, the Turks reportedly used religion as a cover to justify committing atrocities against the Armenians. There are reports of preachers urging Turks to attack and drive out Armenians, claiming they were against Muslims. Ethnic minorities, especially non-Muslims, were forced to live as second-class citizens, obliged to pay “jizya” – protection money – for being non-Muslim. This is the same tax being levied today by the Islamic State of Iraq and the Levant against Christians in the areas they control in Syria and Iraq.

“The Turks wielded religion as an instrument … but it certainly was not a religious issue,” Vera Yacoubian, executive director of the Armenian National Committee in the Middle East, told Al Jazeera. “First off, there were many Arabs who faced the same fate as the Armenians at the time. The Turks were pushing a pan-Turkic agenda, not a Muslim one.”

Arab religious figures condemned the use of religion by the Turks, issuing fatwas and decrees calling on Arabs to help the Armenians. In 1909, a Turkish mufti issued a religious ruling urging Turks to kill Armenians. Sheikh al-Bishri of al-Azhar Mosque in Cairo – one of the world’s leading Islamic institutions – issued a counter-fatwa, calling such acts un-Islamic and urging Muslims to protect minorities.

This was reinforced by another decree issued by the Sharif of Mecca in 1917, calling on Arab Muslims to protect Armenians: “What is requested from you … is to protect everyone who may be staying or living in your quarters or neighbourhood or among your tribes of the Armenian Jacobite community.”

Following the end of World War I and the subsequent collapse of the Ottoman Empire, Armenians settled in the newly drawn up Arab countries with relative ease, gaining citizenship and equal rights. But assimilation for them was more of a challenge due to the linguistic and cultural differences.

Lebanon was more difficult than others initially, as Lebanese Muslims were not so keen on having another Christian minority settle into the country, afraid it would upset the sectarian balance.

“It was the French mandate that helped the Armenians in Lebanon,” Yacoubian said, adding that for political reasons, the French were keen on boosting the number of Christians in the country – leading to unease amid other Lebanese sects. “Yet once they saw the Armenians were not an economic burden and were actually helping the country, the tensions eased.”

In other countries, such as Syria and Iraq, Armenians were treated as equal citizens – in some cases better than other minorities – and allowed to maintain their identity through the establishment of Armenian schools and universities.

“Unlike the Kurds and the Assyrians, the Armenians never had any territorial demands, so were not seen as a possible threat,” Yacoubian said.

Today, Armenians live across the Middle East in very distinctive neighbourhoods; street signs and stores are written in the Armenian language, and people speak Armenian as fluently as Arabic. Accounts from the 1915 massacre are passed down from generation to generation, and commemorations take place every year without any interference from governments.

Lebanon, where Armenians hold six parliamentary seats, is the only Arab country to have formally recognised the “Armenian genocide”. The others, keen on not disturbing the delicate relations they hold with Turkey, have stopped short of formal recognition, but support the Armenians in their right to commemorate the events of 1915.

“I can’t say this enough; if it wasn’t for the Arabs, especially in Lebanon, Syria and Iraq, we would not have an Armenian diaspora today,” Yacoubian said.